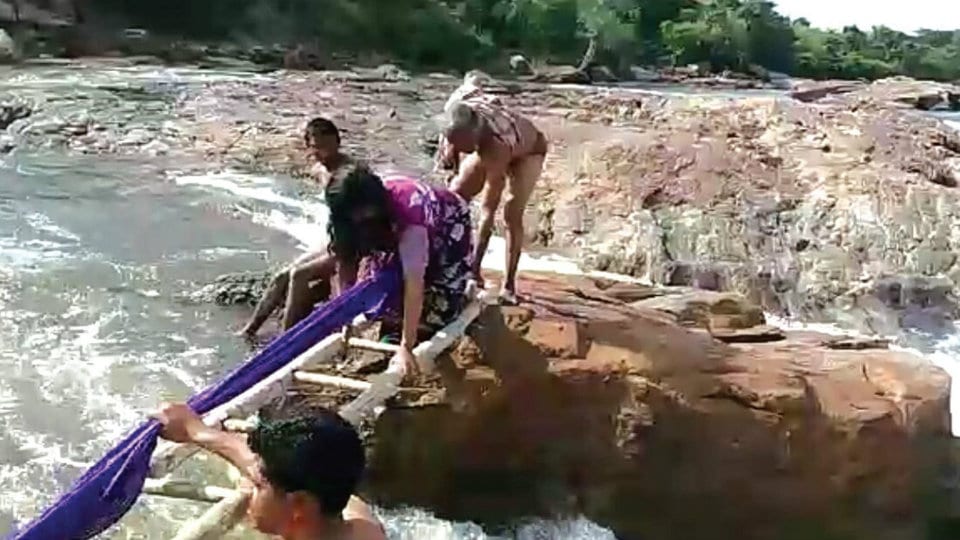 Kollegal: Four members of a family from Tamil Nadu, who had come to visit Shivanasamudra near Sattegala in the taluk, had a miraculous escape when they were rescued by the villagers after they were found stranded in the middle of Cauvery river.

The four persons from Madurai in Tamil Nadu, including a woman, are Palaniappan, Tambi, Doreswamy and Pushpakumari. After visiting Bharachukki waterfalls, they offered puja at the Ranganathaswamy Temple near Shivanasamudra on Tuesday and around 2.30 pm, they had their lunch on the banks of Cauvery river.

Later, they leisurely got into the river for a swim and sat on the rocks in the middle of the river. To their chagrin, the water level started rising after the crest gates of a reservoir was opened to release excess storage of water. As the level rose, the stranded tourists panicked and shouted for help.

The local residents Yusuf and Kalaiah, who noticed the rising water level heard the shout for help and immediately summoned the help of their friends. They also informed the Kollegal Rural Police through mobile phone about the incident.

Instilling confidence in the tourists, the villagers brought a ladder and placed it on the rock where the tourists were sitting. They slowly stepped on the ladder and were saved from a near-death experience. The Rural Police advised the foursome not to get into such adventure in the future and bid them goodbye.

One of the Police Officer told Star of Mysore that people ignore warning boards put up on the riverbank and risk their lives. The Police have increased security at the riverbank to prevent recurrence of such incidents.