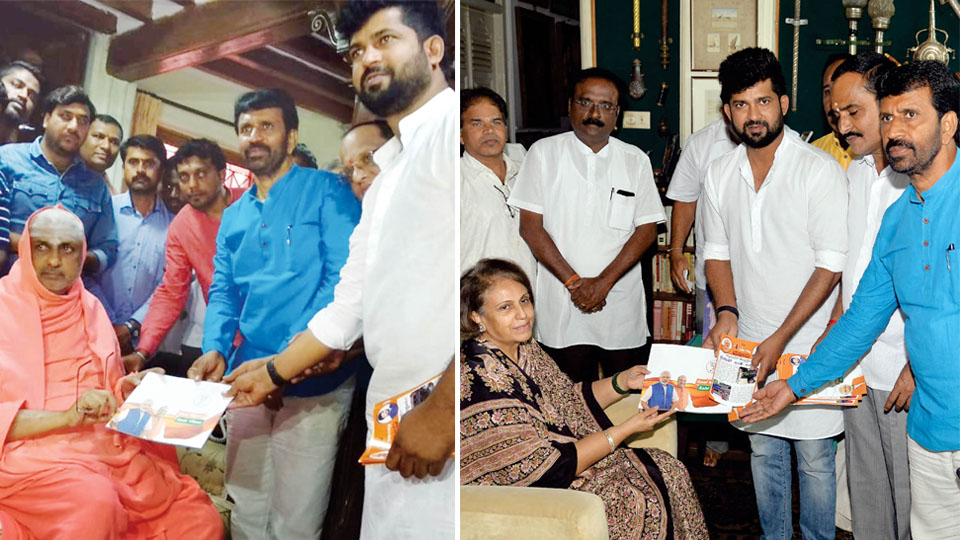 Mysuru:  The National Democratic Alliance government at the Centre led by Prime Minister Narendra Modi is completing four years in office after emerging as the strongest and most influential party that made Congress lose tragically in 2014. With the term of office nearing its end, the BJP has already started its preparations for the 2019 elections.

The party has announced a series of media events to publicise its achievements. Among them is a fortnight-long programme where ministers — both from the Centre and BJP-ruled states — MPs, MLAs, Mayors and all other office-bearers of the party led by BJP President Amit Shah is reaching out to 1,00,000 personalities from different walks of life to highlight its achievements.

The programme began on May 27 and party leaders are reaching out to personalities or experts or influential people across the country. As part of the programme, each BJP leader will interact with at least 25 renowned people from various fields such as retired judges of the Supreme Court and High Courts, retired bureaucrats, retired army personnel, Seers, sports stars, and writers, among others, and will inform them about the achievements of the Modi government.

Launching the interaction programme in Mysuru this morning, Mysuru-Kodagu MP Pratap Simha met Suttur Seer Sri Shivarathri Deshikendra Swamiji at Suttur Mutt and member of Mysore royal family Pramoda Devi Wadiyar and explained the achievements of the Centre and what development has taken place in Mysuru.

At the Suttur Mutt, Seer Sri Shivarathri Deshikendra Swamiji accepted the 33-page booklet that has listed the national and local achievements. Addressing the seer, Pratap Simha said that the book was a 48-month report card of the government. He said that what Congress could not achieve in more than 48 years, the BJP has done it in 48 months, Simha claimed.

The booklet is titled “Saaf Niyath, Sahi Vikas” (clean administration and right development) and it lists out the Rs. 11,000 crore grants that has been sanctioned to Mysuru. Pratap Simha claimed that it was due to his efforts that such huge money has been granted to Mysuru with the help of which various development works including road, railways and airport have been initiated in his constituency.

After meeting the Suttur Seer, Simha proceeded to Mysore Palace where he met Pramoda Devi Wadiyar. Here too, he explained the Modi government’s achievements and as an MP what he has been able to bring to Mysuru and Kodagu. MLA L. Nagendra, party  leaders Mallappa Gowda M.V. Ravishankar, M.V. Ramprasad and Gokul Govardhan were present.