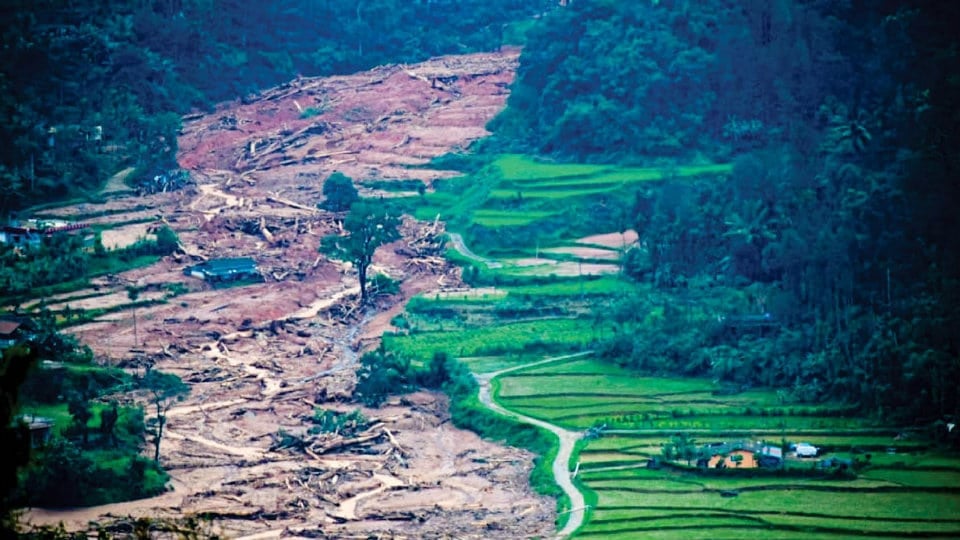 Floods in some regions of the country caused by both untimely and more-than-normal rainfall for two consecutive years have taken their toll of devastation, washing away dwellings of lakhs of people, causing landslides resulting in disappearance of bridges as well as stretches of highways connecting cities, submerging fields rendering loss of standing crops and uprooting residents from their ancestral homes. The economic worth of the damage done by rain fury has been put at 36,000 crore rupees in Karnataka alone. If the losses in the rest of the regions, mainly Bihar, Uttar Pradesh and North-Eastern States are reckoned, the economic value of damage may well exceed one trillion rupees. Rebuilding the dwellings, restoring civic amenities, keeping the spread of epidemics in check, putting people’s life back on track well before nature frowns again is a herculean task, beyond the imagination of people in regions such as the unaffected districts of Karnataka, particularly Mysuru, Mandya, Bengaluru and surroundings.

Civil society members, spared by nature’s fury, along with the country’s disaster management forces, including Army, Navy and Air Force have admirably risen to the occasion by rushing food, clothes, medicines and medical practitioners on an unprecedented scale, in an unmistakable testimony to the oft-quoted saying that the “World is one family.” If the humanitarian spirit can be sustained for all time, one cannot ask for more.

The years preceding the phenomenon of excessive rains witnessed droughts in nearly half the land’s bowls of food crops, resulting in the farming fraternity bugged by loans from both formal financial institutions such as Banks and Co-operatives as well as privately funding agencies charging exorbitant rate of interest. The eventual fall out of the farmers in deep debts committing suicide is tell-tale, although waiving farm loans by the Government partially called halt to the farming fraternity taking the extreme step.

Members of civil society have once again shown solidarity with the victims of devastation, particularly those who solely depend on agriculture for sustaining their families. In an unprecedented initiative, young engineering graduates of Karnataka have launched a platform called fund my crop to support farmers through financial and technical assistance, an agri startup with crowd funding.

The initiative of restoring both confidence and farming activity of the farmers, beginning in Mysuru district has reportedly received Government also as a national programme. If the startup, which has shown its beneficial fall out by first raising horticultural crops such as vegetables, picks up in scale across the country and pace, the nation shall feel grateful to the young engineering graduates of Karnataka. Thus, the farmer-friendly fraternity have done Karnataka proud.

Editorial
How to write text-books on Tipu?
Insight into human psyche, frailty