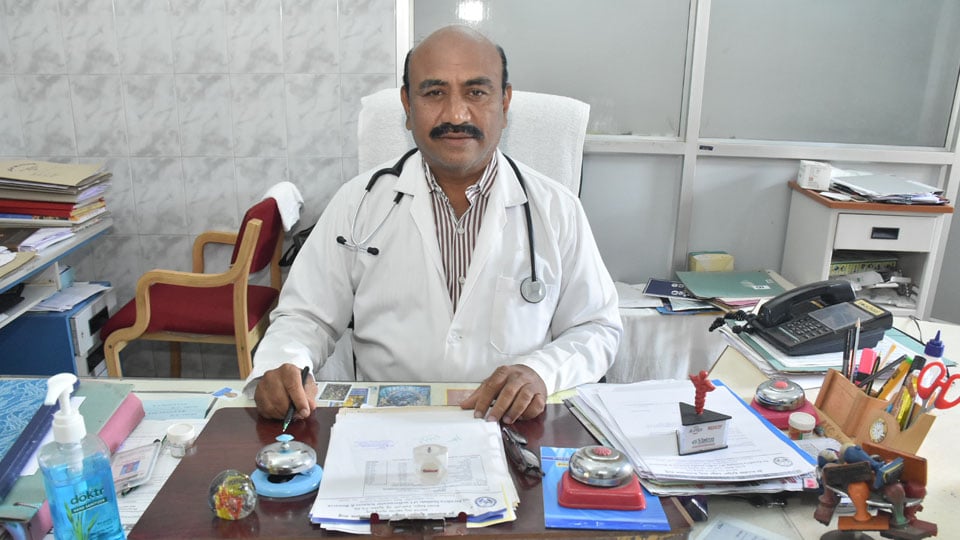 From Student to Superintendent… Dr. Virupaksha’s Journey at PKTB Hospital

It is very rare and indeed an honour for any student to Head the institution in which he studied and a matter of pride for teachers. This is true in the case of Dr. H.M. Virupaksha, Medical Superintendent of Princess Krishnajammanni Tuberculosis Hospital (PKTB Sanatorium), under MMC&RI, Mysuru, where he was once a student. After putting in over 33 years in Government service, he will be retiring on June 30, 2021. Before attaining superannuation, Dr. Virupaksha shared his experiences amid the pandemic with Star of Mysore. Excerpts.—Ed

Star of Mysore (SOM): Had you read about Coronavirus during your MBBS or MD courses?

Dr. H.M. Virupaksha: We had studied in our medicine books about Coronavirus way back in 1983-84. But the present COVID-19 virus is a deadly variant of that virus which we had studied. In my three decades of medical profession, I had not seen such a dangerous virus. It is common to get fever due to certain viruses that will go away after taking medicines. But COVID-19 has snuffed the lives of lakhs of people across the globe. Studies are going on across the world and our scientists will defeat the Coronavirus today or tomorrow.

SOM:  What was your experience when you came across the first case of Corona in your Hospital? Were you afraid?

Dr. Virupaksha:  Everything was normal till February, 2020. Suddenly, we heard about the virus entering several States in India including Karnataka. The entire medical fraternity was shocked after the first Corona death was reported in Kalaburagi. After the Corona positive cases started coming to K.R. Hospital and District Hospital, we were confused about the line of treatment. Initially, the X-ray technicians at K.R. Hospital refused to take the X-rays of suspected patients as they feared of being contracting the virus. Hence, I learnt the basics of taking X-ray from technicians and took the X-rays of patients myself. Later, the staff started practicing the safety protocol to protect themselves from the virus. Since the beginning, I was telling one thing — Infection is different, disease is different and death is different. If there are 10 persons in a family, not all will be infected with the virus. It is known as susceptibility. Coronavirus may have come and gone from many people amongst us without any symptoms. It is not because of immunity but due to susceptibility.

SOM: What difference do you see between the first and the second wave?

Dr. Virupaksha: In the first wave, the medical staff attended to Corona positive patients wearing PPE kits. And in the second wave, they were treating patients with the minimum safety gadgets. The increase in positive cases is not a thing to worry but the rise in mortality rate is worrisome. I have seen patients getting cured with medicine costing just Rs.10 and at the same time, I have come across patients dying even after spending lakhs of rupees. Fortunately, the situation is slowly coming under control and I personally feel that Corona will be eradicated soon.

SOM: You had said that Coronavirus was airborne and does not spread through touching or shaking hands. Can you elaborate on it?

Dr. Virupaksha: I had told my doctor-friends that this virus was airborne and does not spread through physical contact in April, 2020 itself. Eight months after my observation, the World Health Organisation (WHO) experts told the same thing. Even tuberculosis (TB) virus spreads through air and that has been the reason for the death of Princess Krishnajammanni and her kids in early 19th Century despite staying inside the Mysore Palace.

SOM: It seems you have found out an easy way to increase oxygen level in human body. Can you please explain?

Dr. Virupaksha:  Recently, a doctor requested for a bed in District Hospital for his son whose oxygen level had gone below 91. I advised him to take his son for a 5-km-long drive in car with the windows open and check the oxygen level after coming back. The doctor called up to inform me that his son’s oxygen level had crossed 95. Then I told to keep his son under home isolation for 10 days without admitting him to the hospital but on the condition that the boy must be made to sit on open terrace for one hour daily to breathe fresh air. Now, the boy has totally recovered.

A similar advice had been given to many of my relatives in villages who tested positive. My 80-year-old mother had tested positive and now she has recovered fully.

SOM: What improvements have been done during your 7-year stint as PKTB Medical Superintendent?

Dr. Virupaksha: A lot of improvements were done during my tenure. Two Wards were renovated at a cost of Rs.65 lakh. This institute is celebrating 100 years during November 2021. As this was the only TB Hospital in the State then, patients from all districts and neighbouring States used to come here for treatment. I am happy of doing something worthwhile for the institution.

SOM:  Please tell us about your childhood and your family background?

Dr. Virupaksha: I belong to a middle class family. My father, H.C. Mahadevappa was running a small hotel ‘Ganesh Bhavan’ at Halagur in Malavalli taluk of Mandya District. Ours was a big family with four brothers and a sister. Our hotel was famous for ‘dosa’ with butter. Political bigwigs like Ramakrishna Hegde, H.D. Deve Gowda, S.M. Krishna and S.R. Bommai had visited our hotel to eat ‘dosas’ on their way to Bengaluru or Mysuru. After passing away of my father, my brothers are still running this hotel. I was the only child to pursue medicine and became a doctor.

After College, I completed MBBS from Jawaharlal Nehru Medical College, Belagavi in 1985 and joined Mysore Medical College (MMC&RI) to do MD course in Pulmonary Medicine. I was interested more in teaching than practicing. So, I joined PKTB Hospital as lecturer and got promotion as Assistant Professor, Associate Professor and Professor. In 2014, I was made Medical Superintendent of my own institution.

SOM: Being born and brought up in a rural set up, how  has it impacted your service as a doctor?

Dr. Virupaksha: Our family did not have problems of food or clothing but we were not born rich with all luxuries. After I became doctor, I understood what is poverty or hunger. I happened to see poor farmers, daily wagers and others in lower strata of society striving for a meal. This had a great impact on me. This made me to render service to poor and needy with much vigour. So, I had the opportunity of treating thousands of people in the Hospital, thanks to great teachers like Dr. S.G. Desai in Belagavi College.

SOM: How do you feel after serving for over 33 years in Government service?

Dr. Virupaksha: I am indebted to Government of Karnataka for providing me free medical education. I did not spend any money on pursuing the MD course since it was a free Government seat. After becoming the Medical Superintendent of PKTB, I got full support from each and every person and more importantly the entire Group  ‘D’ staff.  I still remember by school teacher, Ramakka who laid a strong foundation. If I am in this position, it is because of the blessings from people like Dr. Desai, Ramakka and others. I received full support from the District Administration to improve the PKTB Hospital coming under Mysore Medical College and Research Institute (MMC&RI), Government of Karnataka.

Dr. Virupaksha: After my retirement, I am planning to give more time to my children, H.V. Shreyas (pursuing his CA course) and H.V. Sheetal (an engineering graduate), who are denied of motherly care and affection since my wife passed away in a road accident in 2012.

Enquiries are coming from some Medical Colleges asking me to work as Honorary Professor but I have not made up my mind yet. Whatever it is, I am definitely going to miss my alma mater.