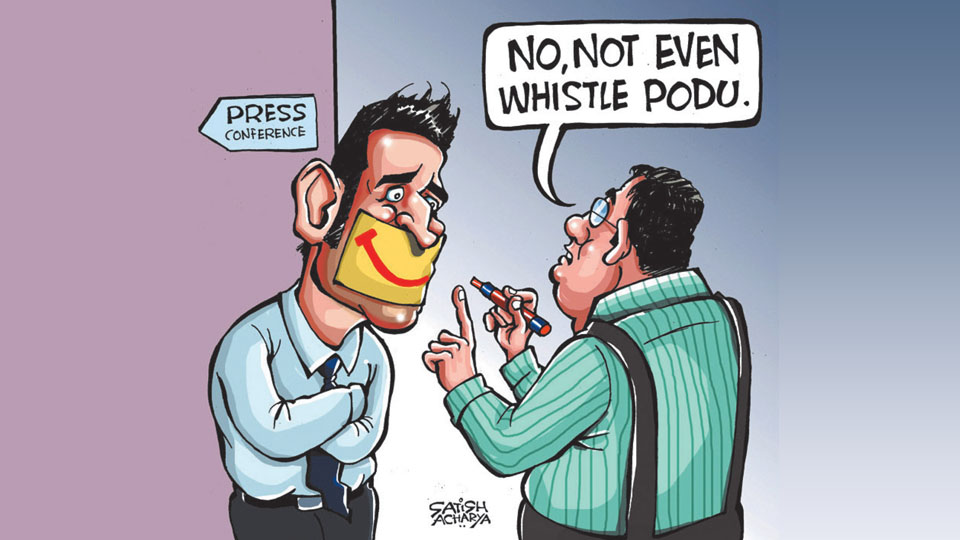 On April 1st, I received a Court order. But I had not written an article in two weeks so I could not have offended anyone. Then I thought it might be an April Fool’s prank. But alas, it turned out that the Court order was real and it was pertaining to the young lawyer-turned-politician, Tejasvi Surya, the BJP candidate from South Bengaluru.

The Court had ordered 49 TV channels and publications not to write anything “derogatory or defamatory” about Tejasvi Surya!

It was obviously a pre-emptive strike by Tejasvi because a lady on Twitter had cast aspersions on his character and one publication had carried the news and Tejasvi did not want to take a chance lest others start covering the story.

It is understandable. The next six days are crucial for the 28-year-old old lawyer-turned-politician’s career.

While many press people took offence to Tejasvi’s lawsuit and the Court’s order, the order itself does not “gag” the media. All it says is don’t publish “derogatory or defamatory” reports.

The problem is these two words are a matter of perception. What a politician may perceive as derogatory and defamatory could be information for the voter to make an informed choice.

Now, by entertaining such suits, the Courts are helping politicians make veiled threats to media, which is  “you must only put ‘positive news’ of politicians; anything negative or critical can be twisted to being ‘derogatory’ and you will be punished.” This is unhealthy for a democracy.

The Court order says the plaintiff, Tejasvi Surya feels that “Some of the media houses take pride in glamorising any event without even verifying its authenticity and present the same in an irresponsible manner, sensationalising even a small issue which is not worth being made public without realising and understanding the catastrophic impact and implication of such programme/ news/ article/ post.”  This is correct. I agree with Tejasvi Surya 100%, and that is why I am a little confused. Why?

Because, first, if it was false tweet, why didn’t Tejasvi simply file a defamation case against the lady who posted the matter that troubled him? And why didn’t he send a notice to Twitter to take the post down and shut the lady’s Twitter account?

Second, while Tejasvi is worried that “Some of the media houses take pride in glamorising any event without even verifying its authenticity” and while he wants to stop “false, malicious, defamatory or derogatory news concerning the plaintiff (himself),” did he have the same ideals when he was defending ‘Post Card’ website which spread fake and hateful posts? After all, he was the lawyer for the founder of the website who was finally arrested? Isn’t this a double standard attitude?

I remember his tweet that said, “If you are with Modi, you are with India. If you are not with Modi, then you are strengthening anti-India forces.” Does this tweet pass the “false, malicious and derogatory” test? For some it may and for some others it may not but the Constitution gives Tejasvi the right to express his opinion and protects him. One should know the same Constitution allows the media too to present an alternative opinion and protection.

Now, while liberals were upset with this Court order and said BJP is suffocating the media, they must know that every politician, party and even bureaucrats are now using this “gag” order tactic. Remember on Apr. 27, 2012, Rahul Gandhi’s close aide Meenakshi Natarajan was scheduled to introduce a Private Member’s Bill in Lok Sabha which sought to gag the media on the pretext of “protecting national interest”?

At this rate, like how they take ‘anticipatory bail’, politicians and officials will start taking ‘anticipatory gag order’. So if they get raided or caught red-handed, their lawyer will promptly mail out the ‘gag orders’ to shut the Press.

Yes indeed, many TV channels and some publications go into a ‘sensationalising mode’ but if one feels the reportage is over the top, one can always change the channel, stop that newspaper or Courts can just prosecute them. But by gagging legit media houses with a threat of being punished on a debatable perception of what is “defamatory and derogatory” is a disservice to Democracy.

After all, didn’t the Supreme Court say, “voters would be handicapped in formulating an opinion and making a proper choice of their candidate unless ‘essential information’ regarding the candidate was available” and added saying that media must “enlighten and alert the public at large regarding the adverse antecedents of a candidate”.

For now, the Courts may be getting into the habit of obliging politicians and officials to gag the media but in the long run it is wilting our Democracy. Be warned !

In Black & White Tejasvi Surya Vikram Muthanna
Mysuru-Kodagu voters will not let me down
Will Ashoka’s Navaratnas produce a great leader for India?