Home » Feature Articles » Mysuru-Kodagu voters will not let me down 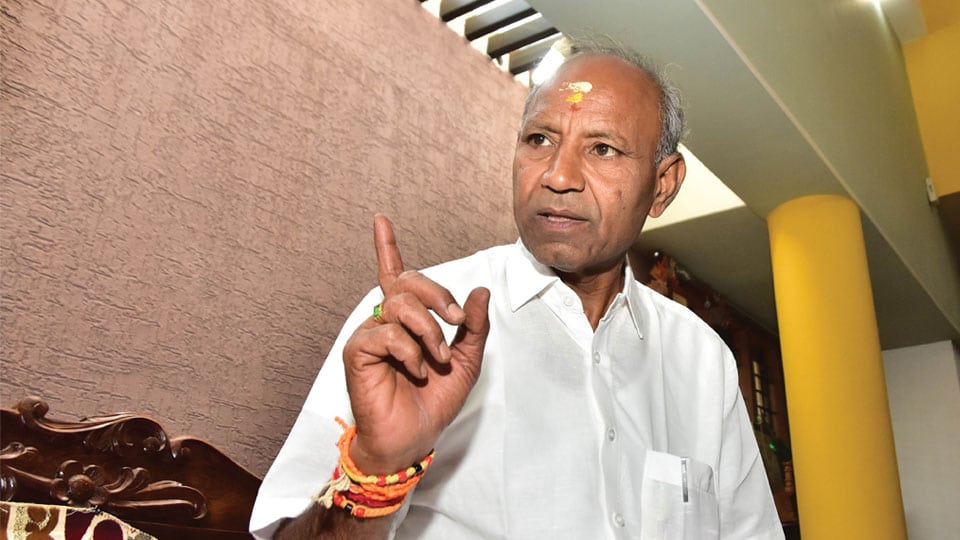 Mysuru-Kodagu voters will not let me down

Very few people know that Congress- JD(S) coalition candidate from Mysuru-Kodagu Lok Sabha Constituency C.H. Vijayashankar was in the Police Department 30 years ago. He hails from Haveri and was a Police Sub-Inspector, Hunsur Circle. He later plunged into politics and saw success by becoming MLA and two-term MP.

Vijayashankar says that he is always connected with the people whether in power or not. He says that people still remember his work as an MP and when he was also a State Minister and expressed confidence that the people will not let him down.

He spoke to Star of Mysore at his residence in Vijayanagar Third Stage where his wife Babitha, son Chetan and daughter Kanaka were with him.

Certain circumstances forced me to join Congress. But my attitude, stance and polices do not change. More than who is my opponent here, the people know much about me. As such, my victory becomes easier.

Star of Mysore (SOM): What is your contribution to the Mysuru-Kodagu Constituency as an MP?

C.H. Vijayashankar: Flights from Mysuru became operational after the works at Mysore Airport in Mandakalli were completed when I was the MP. As an MP then, I succeeded in getting a nod for second phase of airport works following which the land acquisition process began. But years later, the runway has not got expanded.

Coming to Railways, the City Railway Station had only three platforms. As an MP, I became a Member of Railway Statutory Standing Committee and succeeded in getting approval for three more platforms and even got Rs. 28 crore sanctioned for taking up the works. Also, for the benefit of Railway commuters, the West Gate (near CFTRI Main Gate) of the Railway Station was opened along with a ticket counter.

I also got Rs. 39 crore sanctioned for upgradation of Ashokapuram Railway Workshop and when I went there for campaigning now, I heard that there has been little progress there.

I got cleared the approach road to Railway Goods Shed and I have done all these works in a short period of time. I took pains to distribute authorised cards to over 33,000 unregistered tobacco growers and licence to over 29,000 tobacco growers when Ramakrishna Hegde was the Union Minister for Commerce in 1998. I have also been instrumental in the setting up of three more tobacco auction platforms at Tobacco Board in Periyapatna for the benefit of growers, who were finding it difficult to market their produce.

SOM: What is your performance as a Minister in the State?

C.H. Vijayashankar: As a Forest Minister, I gave priority to expand agriculture forestry, establishment of a ‘Daivavana’ in every district and a ‘Vana’ in every school, development of parks and forest conservation.

SOM: What are your plans for coffee and pepper growers who are disheartened by price crash?

C.H. Vijayashankar: As pepper and coffee grown in Kodagu is of good quality, they were in great demand and the price too was high. But the Centre’s decision 5 years ago to import pepper from Vietnam has resulted in the crash of prices, which has hugely affected local growers.

However, I will make honest efforts for a fair price if the Congress Government comes to power at the Centre.

SOM: Your opponent Pratap Simha has accused you of doing nothing and claims credit for Railway and National Highways and Airport improvement and Passport Centre in Mysuru. What is your answer for this?

C.H. Vijayashankar: The Railway track doubling work and Railway Workshop modernisation works were taken up when I was the MP. Why the runway at Mysore Airport is yet to be expanded even after 5 years? The people are closely watching those who claim credit for the works that I had done as MP.

I have given utmost priority for the development of the Constituency when I was an MP twice earlier and the people know about it. I have also done whatever possible by me for protecting the interests of the coffee, pepper, cardamom and tobacco growers. Above all this, I have been in constant touch with the people whether I was in power or not.

SOM: You were elected twice a BJP MP but now you are contesting against the same party from which you had won earlier?

C.H. Vijayashankar: Certain circumstances forced me to change the party. But my attitude, stance and polices do not change. More than who is my opponent here, the people know much about me. As such, my victory becomes easier.

SOM: As a new entrant to the Congress, how do you expect that the ‘coalition dharma’ will be maintained?

C.H. Vijayashankar: Although I am a new entrant to the Congress, those in the party know me very well. As far as the coalition dharma is concerned, I am confident that workers of both the parties will unitedly campaign for me in a bid to form a Government of opposition parties at the Centre. In the present circumstances, it is inevitable for the workers of both the parties to fight unitedly against the BJP.

SOM: There are reports that local workers are hesitant to work for Congress candidate?

C.H. Vijayashankar: The top brass of the Congress and JD(S) have formed the coalition Government with an intention of completing the full-five-year term and H.D. Kumaraswamy will continue as the CM for the next four years as well. As per the poll-pact, the JD(S) workers under the leadership of District Minister G.T. Devegowda have been campaigning for me. The same is the situation in Mandya, Hassan and Chamarajanagar LS seats as well. As such, there is no question of non-cooperation or differences between the workers of the two parties.

SOM: What would be your priorities if elected as an MP?

C.H. Vijayashankar: Stop import of pepper from Vietnam, remunerative prices for crops, subsidy for coffee growers and appropriate spending of MP local area funds for ensuring comprehensive growth of the Constituency, would be among my first priorities, if elected as an MP.

SOM: How is the response from the people for your campaign?

C.H. Vijayashankar:  I have already criss-crossed the Constituency and I am getting a warm response from the people wherever I go. I have the hope that the warmth and affection shown by the people towards me during the poll campaign will translate into votes thus ensuring my victory.

SOM: Has your family been part of your campaign?

C.H. Vijayashankar: As I am always in the midst of people, there are no restrictions in my family. My wife, son and daughter have extended their full co-operation for my campaign. Also, my well-wishers, friends and followers too have been actively campaigning for me.

SOM: Which Assembly Constituencies can fetch votes for you and what are your plans for garnering more votes in doubtful places?

C.H. Vijayashankar: As I have been an MP twice earlier I have found no problem anywhere. Congress leaders and workers have been extensively campaigning for me. Also, as the JD(S) is strong in Mysuru district and I have the confidence that I will get lead in all eight Assembly segments, including the two in Kodagu district.

SOM: What is your take on the perception that BJP is strong in Kodagu and that a Modi wave is sweeping the Constituency?

C.H. Vijayashankar: More than who my opponent is, the people of the Constituency very well know me. The Congress is strong in Kodagu, with a good number of party workers. Besides, all communities are extending support to me. As far as Modi wave is concerned, it will not work in old Mysuru region and there is no doubt that coalition candidates will romp home in this region. I have full confidence that the people would bless me and send me again to Parliament.