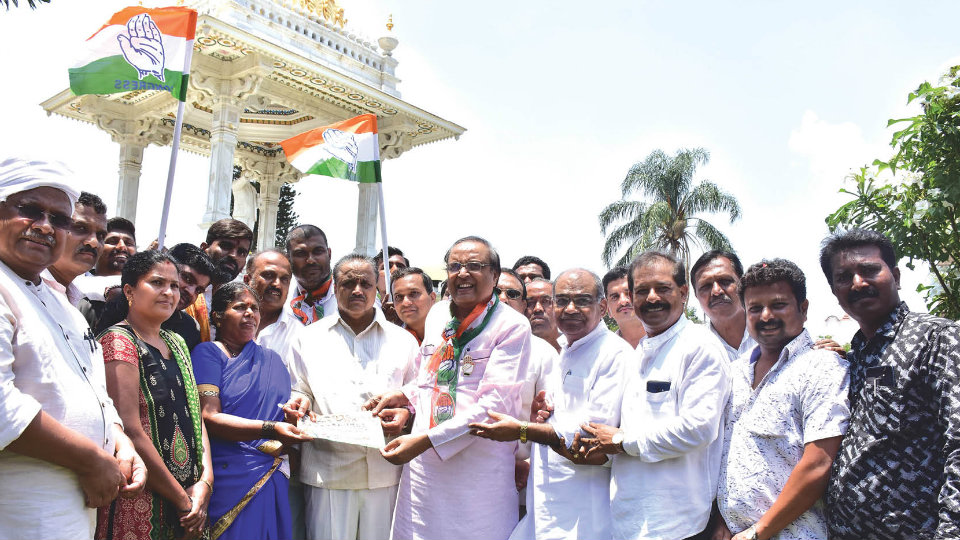 Mysuru: KPCC General Secretary Mukhyamantri Chandru launched a tirade against BJP alleging that it is going on deceiving people of the country in the name of building Ram Temple in Ayodhya and trying to polarise the people in the name of democracy.

He was speaking after offering floral tributes to the statue of Dr. B.R.  Ambedkar at Town Hall here on Friday where a function had been jointly organised by Karnataka State Backward Classes Federation and AHINDA (Federation of Minorities, Backward Classes and Dalits) Federation to seek support for Mysuru-Kodagu Lok Sabha coalition candidate C.H. Vijayashankar.

The soul of Congress and JD(S) is India and because it was Congress which built the nation after independence and developed the country that BJP today is able to enjoy power. Modi is whitewashing all the Congress schemes, reflecting them as his own schemes and trying to fool the people. The BJP has not been able to fulfil even a single promise it had made earlier. Surgical strike is a political tool for them, he charged.

The NDA which had opposed the implementation of GST during UPA regime has implemented the same when it is in power today.

Demonitisation caused immense hardship to the people. When Aadhar card was introduced, the same NDA shouted hoarse from the rooftops. But as soon as it came to power, it claimed that all these were its achievements, he said.

With the Supreme Court rejecting the plea of the Central Government on Rafale fighter jet deals, the lies of Modi stands exposed, he added.

The BJP candidate from this Constituency must be taught a lesson as he is against the minorities and even says that their vote is not important, he said and added that people must support a coalition candidate like Vijayashankar, who is amiable and courteous to them all the time.