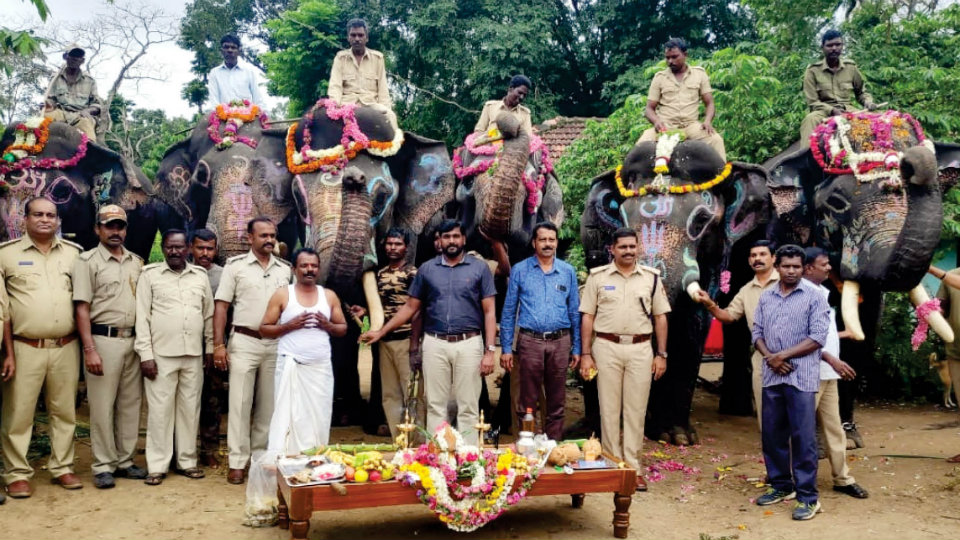 First batch of six elephants to arrive in city tomorrow

Mysuru: Gajapayana, the march of Dasara elephants, will begin tomorrow morning at Veeranahosahalli Gate bordering Nagarahole National Park and the first batch of six elephants, led by Howdah Elephant Arjuna will be transported to city later in the evening.

Gajapayana will be launched after Priest S.V. Prahallad performs puja to jumbos. If Mysuru District In-charge Minister is appointed by tomorrow, then the Minister will perform puja.

A stage for tribals to present cultural programmes has been erected and works on erecting a welcome arch is going on.

The first batch of six among 14 elephants are: Arjuna, Abhimanyu, Varalakshmi, Dhananjaya, Eshwara and Vijaya.

Kushalnagar, Aug. 21 (Akshay&KS) – Six Dasara elephants housed at Anekadu Elephant Camp were given a traditional farewell by the Forest Department personnel at the elephant camp here this morning.

The Department officials performed puja to Dasara elephants Vijaya, Eshwara, Dhananjaya, Vikrama, Gopi and Prashanth. Out of these six elephants, Vijaya, Eshwara and Dhananjaya, who are included in the first batch of six elephants to arrive in Mysuru tomorrow evening, were sent to Veeranahosahalli in trucks. Veterinarian Dr. Mujeeb accompanied the three Dasara elephants along with the three  Mahouts and Kavadis to Veeranahosahalli.