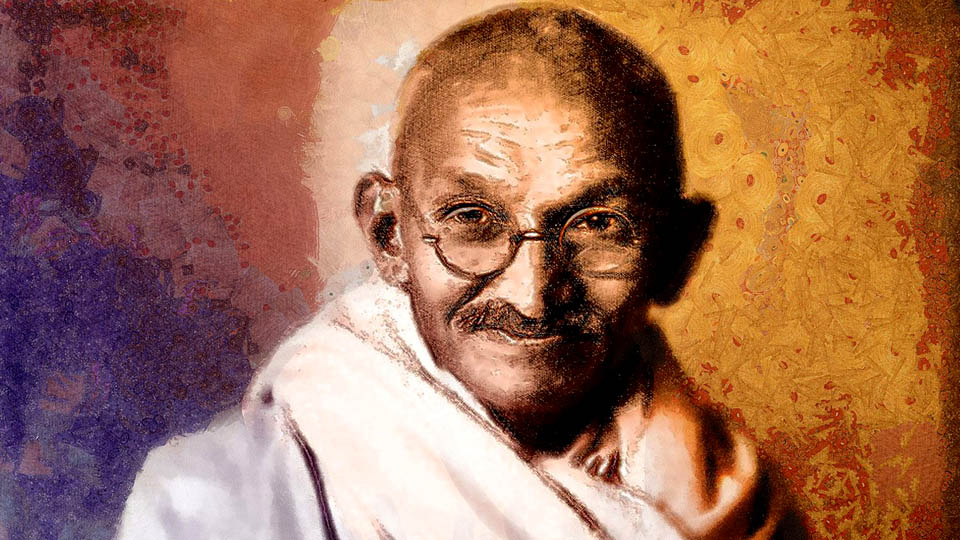 Come October 2, the entire country including politicians and common men from all walks of life pay homage to Gandhiji who is one of the main architects of our freedom. Functions are arranged in schools, colleges and speeches are delivered to the present generations of students who are not familiar with this great personality. I was only a young boy when Gandhiji was very active and I did not have the good fortune of having the darshan of this great man. The great scientist Einstein said that future generations would not believe that a man of this greatness and stature walked on the roads of India and other countries. Gandhiji was a great votary of truth and non-violence and youngsters would do well to read his autobiography. All these thoughts came to mind while writing this note.

For the present I have thought of some anecdotes connected with the Mahatma as narrated by the late Mathoor Krishnamurthy of Bharatiya Vidya Bhavan (BVB), Bengaluru and a great admirer of Gandhiji. I remember he was a volunteer at a meeting of Mahatma Gandhi. Inspired by his teachings and personality he has written in simple Kannada six volumes titled Gandhi Upanishat, published by M.P. Birla Foundation, Bengaluru. There are many anecdotes connected with Mahatma Gandhi and I have selected some incidents in this short note.

Gandhiji was worried about the economic poverty of this country. He was camping in Panchagani and in his prayer meeting he said, in our country poverty has a dignity of its own. The poor man is not ashamed of his poverty. Though he is poor economically, he is not so spiritually. God is present in him in the form of rains which produces food not only for his family but for the entire society. He is not inferior to any king or emperor. Thus Gandhiji elevated the status of a farmer to that level.

Gandhiji had many interests. He had a good knowledge of classical music and liked to listen to good music. He was an admirer of the legendary singer M.S. Subbulakshmi. In 1947, Gandhiji wanted to listen to devotional songs by her. In fact, a music programme was arranged by M. S. Subbulakshmi on Oct. 2 but she could not go to Delhi on that day. So it was decided to record the devotional songs of Subbulakshmi and send it to Delhi for Gandhiji to listen. She recorded six devotional songs but Gandhiji wanted to listen to his favourite song which begins with ‘Haritum haro’. She said that she was not familiar with this song and somebody else could be invited to render it. But Gandhiji refused and said only Subbulakshmi should sing, even she stammers while singing. This happened on Oct. 1 and the recording had to reach Gandhiji the next day. Subbulakshmi along with musical instruments assembled the various aspects of the song and this continued till midnight. However, the recording was ready by three in the early morning and it was sent to Delhi by airplane for Gandhiji.

READ ALSO  Rangayana to stage play on Gandhiji across the State

Gandhiji was supremely happy and Subbulakshmi felt that her music had a distinguished VIP listener. What a great moment and a rare combination. Gandhiji was shot dead in just three months time and this song was broadcast on All India Radio. On hearing the assassination of Gandhiji, Subbulakshmi fell unconscious. And she did not sing this bhajan ‘Haritum haro’ for many months.

Another interesting anecdote may be recounted next. Pandit Nehru, the first Prime Minister of India, was a great admirer of Gandhiji and used to take advice from him on many issues. But Nehru had to do certain things without the knowledge of Gandhiji. Nehru returned from Europe and directly reached the venue of Congress Session in Madras (now Chennai). Important decisions were taken on that occasion and Gandhiji did not like some of them and told Nehru that they are not the right steps to adopt. You are going at a great speed and at great speed persons lose sight of the correct perspectives and that will lead to mistakes. You may be under the illusion that India gets freedom as it happened in Europe and that is not going to happen. Your European experience will not come to your help in India. From that point of view you will commit only mistakes here. You must have belief in Satyagraha and Ahimsa the two steps in which I have full belief. You should build up a team of persons who are trustworthy and more than that they should have belief in non-violence. Thus discipline is most important.

There is a well-known adage ‘Exaggeration is an inflated lie.’ But most of us do it particularly while praising a boss or any officer who we may think would be useful one day. Thus exaggeration is an investment for future. In one of the newspapers, Nehru was abused in strong terms and he felt very unhappy and brought it to the notice of Gandhiji. Gandhiji also felt unhappy and consoled Nehru. He advised Nehru not to take it seriously because it may be an exaggeration. Certain newspapers exaggerate things to get advantage of it. But people in public life should not worry too much over these comments. Bhagavadgita has clearly told us that you should not get overjoyed when you are happy and depressed in sorrow. This is a great tip given by Bhagavadgita and the book is not for worshipping in the puja room, but it is a practical guide and you should carry it in your mind always. Nehru felt a sigh of relief after hearing the words of the Mahatma.

On another occasion, many persons came to Gandhiji and narrated that they were tortured physically by another group and we are the votaries of non-violence (ahimsa) as preached by you. Hence we kept quiet and were beaten up. Gandhiji was upset and sympathised with the victims. After a minute he said non-violence is not cowardice. When somebody attacks you, you should give him a befitting reply.

Some of these anecdotes not only throw light on the personality of Gandhiji but  also act as guide to us in serving the society. Thus we may pay homage to Gandhiji, the Mahatma.