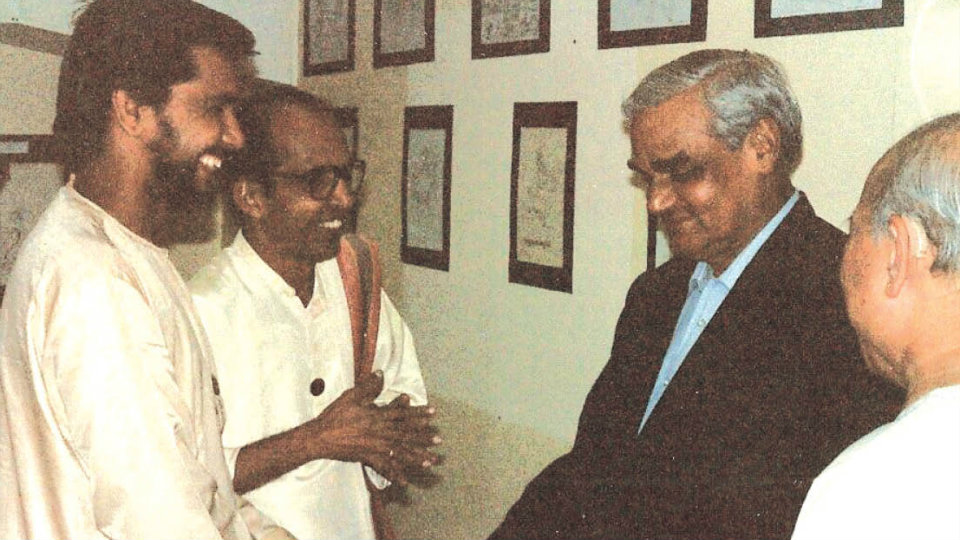 Mysuru:  Former Prime Minister Atalji was not only a rare poet-politician-orator but also a man who valued relationships. Even the little moments spent with Atalji was very memorable and unforgettable. This is how the well-known Ganjifa artist Raghupathi Bhat of our city remembered the great Statesman Atal Bihari Vajpayee, who passed away yesterday.

Speaking to Star of Mysore, he said, “I was doing a demonstration titled ‘Sahaja Bharatiya Bannagalu’ (India’s natural colours) in London’s Albert Victoria Museum in 1990. Sri Atal Bihari Vajpayee had come there. Before the programme he was passing through the museum visiting every room, accompanied by ‘Taranga’ Editor Santosh Kumar Gulwadi. I spotted Vajpayee then. He also saw me and keeping the automatic door open, he said, “Aap andhar jayiye Raghupathiji.”

Two days before this incident Vajpayeeji had inaugurated an exhibition on Ganjifa Art and Line Drawings at the Bharatiya Vidya Bhavan (BVB) in London organised by Mathoor Krishnamurthy, the then Director of BVB. Hence, I had the occasion to interact with Vajpayee for 30 minutes. Because of this interaction, he had read about the demonstration and attended the event, said Bhat.

At this time in the Museum, as he was walking by, Gulwadi spotted a white thread on the black coat he (Vajpayee) was wearing. He then asked him, “Atalji ye kya hai?” (Atalji what is this?).

Atalji, known for his sense of humour, laughing loudly replied, “This coat was torn. In the aeroplane I asked for a thread and needle from the Air Hostess and she gave it to me. I then stitched it myself,” patting Gulwadi’s back.

Later, putting his hands over both of us and walking along with us, he said, “I have only one coat. It was torn a bit. Hence, I only stitched it. I really do not care. Come let us go.”

Thus he revealed the truth about the torn coat and the white thread, said Bhat.

“I was really surprised by his simplicity and straight talk. He is such a big leader but without a trace of ego, I thought to myself,” recalled Bhat.

India’s culture and art forms should survive and the politicians must encourage this always. His ideas and thoughts mesmerised us. I can never forget the love he showed and the hug he gave me.

In later years, he became the Prime Minister and rose to great heights. Everybody, irrespective of the party, loved and respected this Ajathashatru (a man with no enemies). He had also made me a member of an organisation even though I had not asked for it. I wanted to meet him once again. But it never happened, my apologies to Atalji. May his soul rest in peace, said Raghupathi Bhat in great sadness.