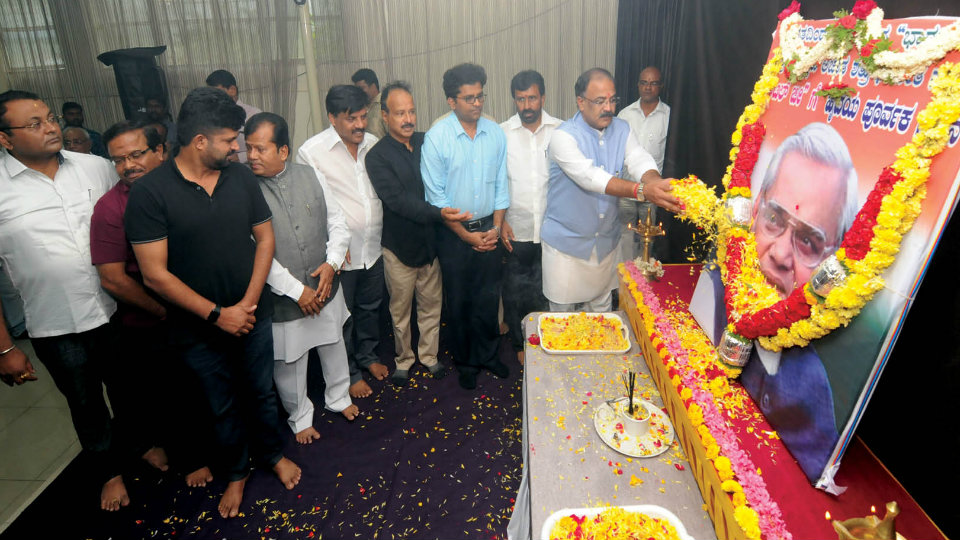 Paying his tributes, Limbavali said that though Atalji was not present with us physically today, his ideas, thoughts and the many reforms he brought about will continue to resonate for a long time.

Atalji was not able to attend the BJP National Executive Committee meeting in Bengaluru in 2009 as he was not well. But he was very happy to learn that BJP had formed a government on its own in 2008 in Karnataka. During the Jayaprakash Narayan movement, he was asked to come out of RSS and Jan Sangh, but Vajpayee did not agree and later formed the Bharatiya Janata Party (BJP) in 1980 with 80 members, said Limbavali.

Vajpayee was a simple person who always had concern for the poor and the farmers and a man who never believed in doing hate politics. He was always selfless and one of the finest Statesman India has produced, he said.

MP Pratap Simha said that the massive victory in 2014 under the leadership of Prime Minister Narendra Modi was due to the foundations laid by Atalji. It was the late Prime Minister who had asked Modi to become the Chief Minister of Gujarat, he added.

Recalling how he was inspired by Vajpayee, Simha said it was because his father used to take him to Bengaluru in 1989, 1991 and 1996 to listen to his speeches. If the country is in the forefront today it was because of the many steps that Vajpayee took like building of the national highways, the nuclear test conducted in 1998, gram sadak yojana connecting rural India and the push he gave for software industry as a result of which a big software technology park is coming up today near Infosys in city, he said.