Home » News » Get set for a bumpy ride this Dasara 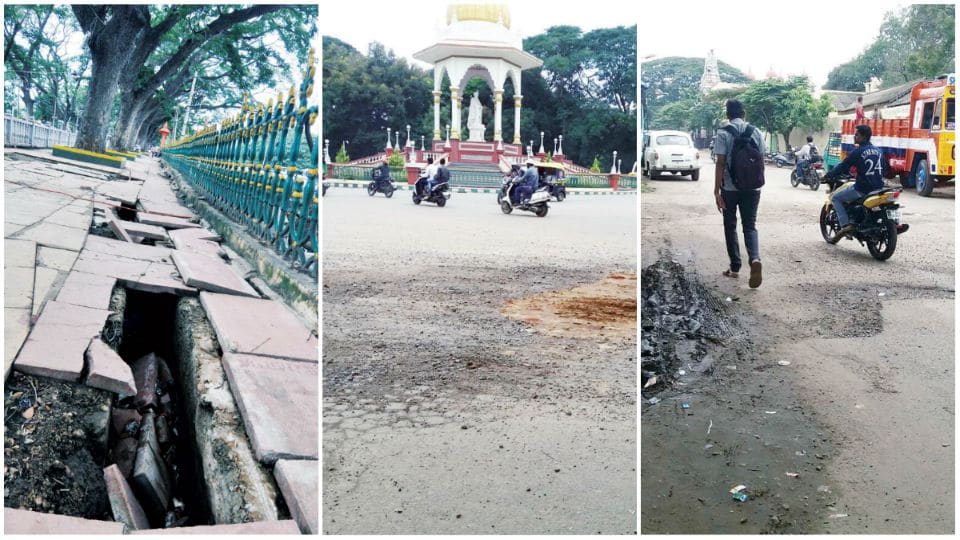 Get set for a bumpy ride this Dasara

Mysuru: With 18 days remaining for Dasara Navaratri to begin, hectic preparations are on for the grand celebrations that symbolises the glory of the past and reflects the rich cultural heritage of Mysuru region. While a group of 15 elephants, brought from various elephant camps across Mysuru district, are being trained to perform on the Vijayadashami Day, various Government Departments are putting their heads together to ensure that the celebrations are memorable and at the same time all the events end up being crowd-pullers.

Amidst fanfare and preparations for the annual festival, one problem is conveniently ignored by the civic authorities, District Administration and the fund-provider State Government. The Mysuru City Corporation (MCC) is yet to launch major asphalting, pothole-filling and beautification works on the key arterial roads including road marking, median painting and kerb stone painting.

The direct victims of this apathy of officers and the elected representatives are motorists who are finding it tough to manoeuvre on roads filled with potholes and pedestrians who are forced to walk on crater-filled footpaths. One careless step and pedestrians are bound to lose a limb or two. 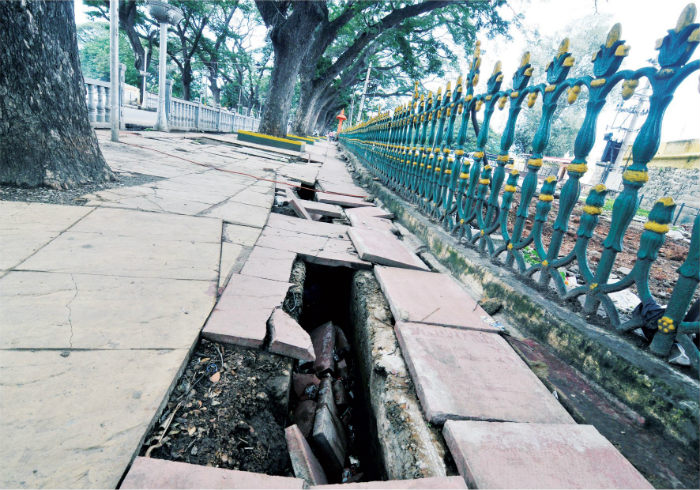 An apology of a footpath near Kote Maramma Temple. One careless step and a pedestrian is sure to lose a limb.

Interestingly, at the high-powered Dasara Committee meeting that was held in Bengaluru recently under the Chairmanship of Chief Minister Siddharamaiah, Mysuru District in-Charge Minister Dr. H.C. Mahadevappa and the CM instructed officers to ensure that all the road works are completed before Dasara and sufficient funds would be released for the same.

Sources in the MCC said that a proposal listing a requirement of Rs. 21 crore for Dasara works had already been sent to the State Government and the Government might release Rs. 10 crore. Sources said that there may not be many takers for the tender as the time is too small to complete the works.

With the way things are going, it looks like none of the roads will get asphalted and not even one footpath will be repaired as the officials and contractors can now conveniently blame the lack of time. In some of the areas, MCC workers are filling mud into potholes and the roads that have been dug up for laying water pipes. This has annoyed residents and motorists who have questioned the rationale behind filling mud which would wash away in rain.

Forget the arterial roads. The roads and footpaths in and around the Mysore Palace, Hardinge Circle, Mysuru City Corporation, Bengaluru-Nilgiri Road, Sub-urban Bus Stand Road and the road that leads to Bannimantap where thousands of tourists converge, are neither motorable nor the footpaths are walkable. While there is some development works like the construction of a flyover on the Mysuru-Hunsur Road near Hinkal, the authorities have turned a blind eye to the roads and footpaths within the city. 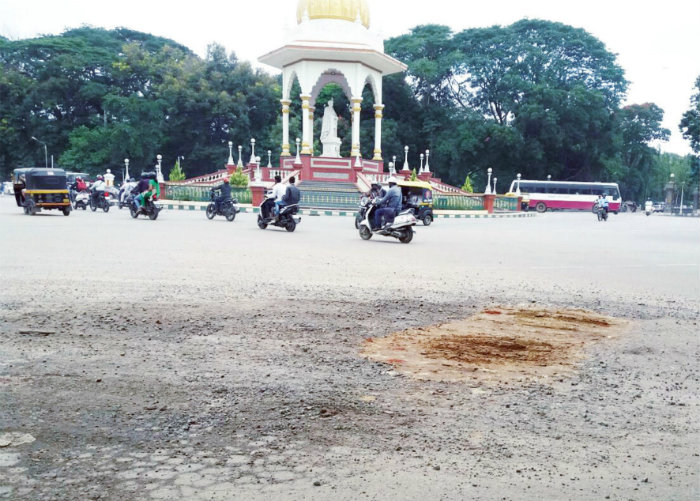 This is the state of Hardinge Circle where asphalting works were recently completed.

Certain parts of the Raja Marga have been dug up to lay 11KV electricity cables and they have not been restored properly. Gaping holes on this stretch poses a great danger to people. Rains make the movement on these roads worse. The MCC has spent crores of rupees in constructing footpaths around the Palace and to lay tiles. Most of the tiles near the Kote Maramma Temple and Varaha Gate have been broken. 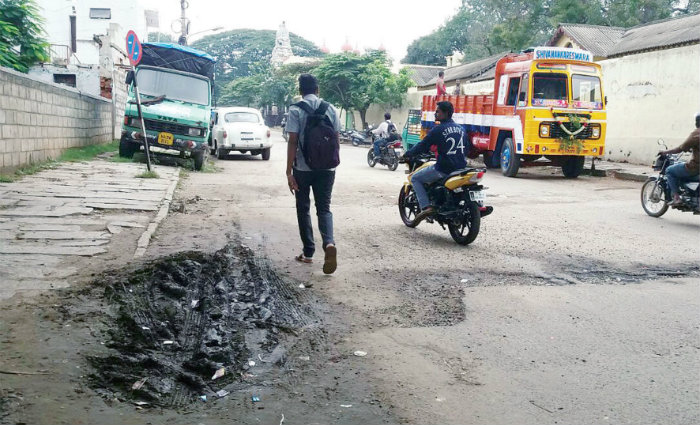 Even if the MCC takes up road repair works at this stage and finish them in war-footing, one can imagine about work quality. People in the know of things say that most of the works that are carried out just before Dasara are to fill the pockets of politicians and politically-connected contractors. And this is a year-on-year occurrence — every year they repair and the works don’t even last a few months. Another Dasara comes and again repair works are carried out…the cycle never stops. 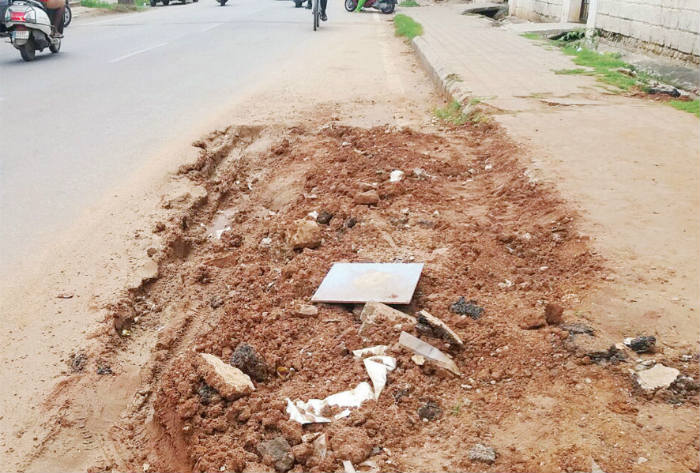 Works will be taken up in one or two days…

When Star of Mysore contacted MCC Commissioner G. Jagadeesha on the Dasara road repair works, he said that as per the directive of Deputy Commissioner, the process of road repair works has started and tenders have been called. “Works are delayed due to rains and we will get on to the job within one or two days,” he said.

Deputy Commissioner D. Randeep said that works on laying tiles on footpaths, cable laying works taken up by Chamundeshwari Electricity Supply Company have already begun and a deadline of Sept. 15 has been imposed for the works to be completed. “Regarding road repair works, I will discuss with MCC Commissioner and take suitable action,” he said.

Mayor M.J. Ravikumar said that the State Govt. was yet to release the promised first instalment of Rs. 10 crore. “Without the money how can we start works. Let the money come first and we can think about repair works. Moreover, it is raining and we cannot initiate development works at this stage. We will have to wait for the rains to subside to carry out development works,” he said.