Home » Columns » Give NCC a try 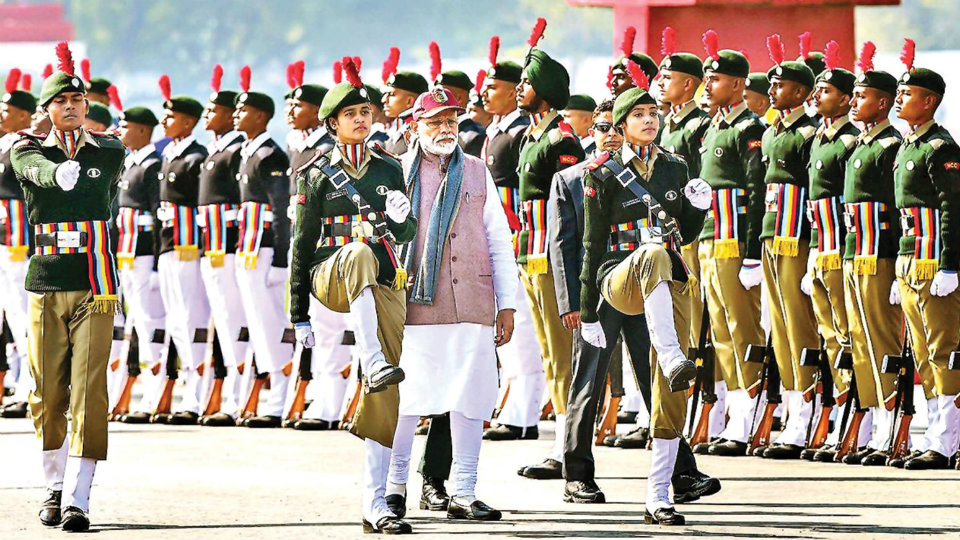 Give NCC a try

On Valentine’s Day, it was not the of roses that engulfed India, but the blood of our soldiers.

A few days later some associations and politically-backed groups had candle-lit marches. Very good indeed, one must acknowledge a martyr. But some of these acknowledgements felt a little insincere, as there was an air of “self-promotion” in it when they uploaded pictures of the event in social media, and dispatched press notes with photographs.

If you want to do something good, do it, don’t seek credit for it. We don’t see soldiers posting their pics standing on the border everyday reminding us that they are heroes, do they?

Now, that said, forget army, how many of the people who lit candles and how many politicians who visited the martyrs’ family will send their children to even join National Cadet Corps (NCC), an organisation seen as an introduction to the armed forces?

It is time that people who say they love the armed forces put their money where their mouth is and ask their kids to join NCC.

It turns out most schools do not encourage NCC. Yes, indeed cultural activities, sports and academics are absolutely important, but so also some form of “military service” and NCC is a fantastic option.

Of course, no one expects the whole nation to join the army, but when you join NCC you will have a sample of what military personnel go through and have a better appreciation for them.

READ ALSO  Strategies in dealing with COVID-19 should be dynamic as virus is expert in mutation: PM

Also NCC is not just about screaming, Left-right-left, Atteeeention, Stand-at-Ease and Daayine  mod. Its curriculum incorporates military training in small arms, subjects related to adventure activities and national integration. They also have cultural events and youth exchange programmes with 11 countries.

In the end you have a sense of physical hardship, mental toughness, a sense of unity, equality and most importantly you learn to be Indian first and Indian last because in NCC all are equal — From your uniform to your tent to your punishment. No wonder their motto is ‘Unity and Discipline.’

In fact, former President, the much-loved Dr. Kalam was an advocate of compulsory NCC training at the school and college levels. He believed it would lead to the elimination of corruption in society, promote discipline and help protect the environment.

Later the idea of making NCC compulsory was mooted in the Parliament but after a feasibility study the then Defence Minister Manohar Parrikar announced in Parliament that compulsory NCC was not feasible in terms of requirement of infrastructure, manpower and resources.

Nothing should be made compulsory in a democracy, but small acts of patriotism should come naturally to its citizens. Putting your child in NCC could be that little act. It will not only help the students but also the parents, as children will turn out to be humbler and grateful.

Also, even after NCC if one does not want to join the armed forces at least it will sensitise us to the forces. Yes, we acknowledge our martyrs but a few weeks later we forget.  I say this because how many of us have ever let a Jawan move ahead in a queue at the train station? How many private schools have ever given a donation-free seat to an army widow’s child?

Many civilians in their arrogance belittle a soldier by saying, “It’s the best he could get, and it’s easy to get it. And he also gets the perks.” May be, but never forget even today there are young men who serve this nation because they want to.

I have two friends in the army. One went to National Defence Academy (NDA) and the other was with me in NCC and today is a Colonel. They both did it because they wanted to be army men.

Both are bright and handsome men and would have gone places in the corporate world. But they chose country over money. They have both put this nation before their children and wife. They both have put this nation before their own life so we can enjoy ours. Yes, they do get perks; but would we civilians give up our weekends, 24×7 Internet service and Facebook posts for subsidised egg, horlicks, soap and rum? I doubt it.

Yes, we must light candles, but we must do it because we feel it, not so we can show it.  And yes, we must try to give a taste of the military life to our children, show them a sample of the stuff soldiers are made of, for they may never serve in uniform, but at least they can learn to serve this nation just as selflessly as a man in uniform.