Home » Columns » Goa, the Land of Cathedrals and Cashew Nuts 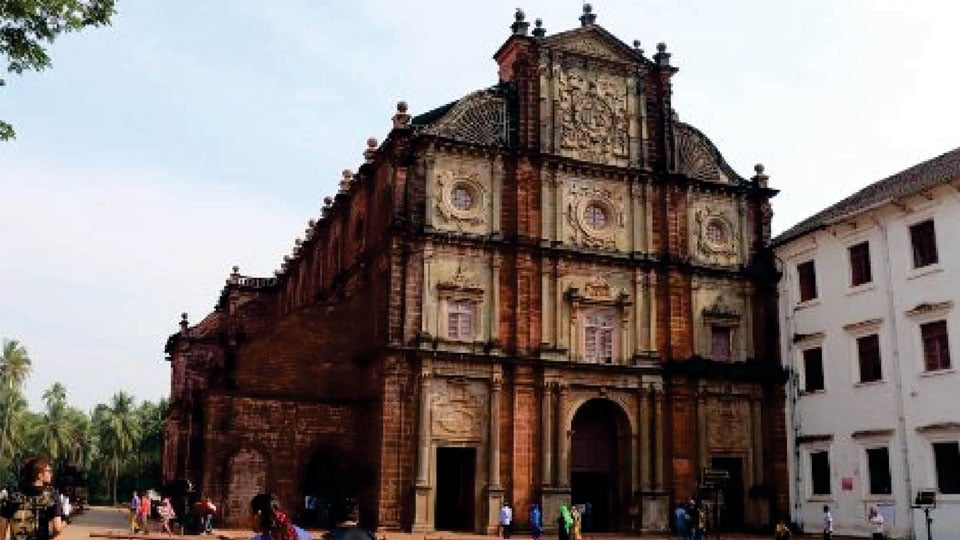 Goa, the Land of Cathedrals and Cashew Nuts

Recently, and to be precise a week from 20th December 2019, we were in Goa. The reason was that the first batch of medical students of Adichunchanagiri Medical College and Research Institute at Mandya had decided to meet at Goa in the form of re-union and this they have been doing for the past many years and next year they will be meeting at Vishakapatnam. Myself and my wife were familiar to all the fifty and odd doctors who had assembled at Goa and we were also very happy to find the old faces who had made it good and are serving in various parts of India as good doctors and have brought a name for themselves and to the Institute they studied. Their tribe should increase.

Apt to the occasion they had invited Vishwajeet Rane, the Health Minister of Goa, to be the chief guest on the occasion. He distributed crystal mementos with names of each of the then students embossed on the memento. I was asked to be by the side of Rane and it was a great honour to me. I told Rane that I am the General Secretary of South Indian Numismatic Society and would like to have one of the future conferences at Goa and he readily agreed. Perhaps one of our conferences may be held at Goa. All these took place on the lawns of the luxurious resort famous as Kenilworth. All the students and their parents were regularly seen on the beach at Goa and most of them were eager to enjoy the sun-rise or the sun-set and most of them took photos with great pride. The sea at Goa was so calm and not without much fog unlike at Kanyakumari.

All the medical doctors had decided amongst them to come in full suits for men and pink sarees for women. This added a great aesthetic touch to the function.

Rane came from a poor background. He made it very hard to become a legislator and was unanimously chosen as the Health Minister of Goa. His ambition as he himself explained is to follow the example of our Prime Minister Narendra Modi to make India a healthy country in all aspects and Rane’s ambition is to make Goa a healthy State in India. I was excited and when I reached the camp, I learnt more about Goa by going through various books. Education standard at Goa is of high order and has a University also. There are Hindus and Christians living in harmony. There are many Hindu temples of which Saptakotiswara temple belonging to Kadamba period (4th to 7th century AD) is most important. We also visited temples of Mangeshi, Kamachi and Malachi. Practically, they follow the Hindu tradition in architectural style but cathedral style influence is also seen. They exhibit a harmonious blend of Hindu temple and cathedral styles.

Saint Xavier’s church is famous in Goa. His body is well-preserved and is shown to the devotees once in a year. Christians all over India throng the portals of the cathedral to see the holy body of this great saint. It is similar to our Kashi where Lord Viswanatha resides. In old Goa during the fasting days known as Lent, idols of saints of Christianity are taken in procession and Christians come in groups to witness this holy spectacle.

By about 1510 AD, the Portuguese began preaching Christianity. They are known as Dominic Christians. In 1517 AD Fransiscans came to Goa and began preaching Christianity. Jovan Albukarque was appointed as the first Bishop of Church in Goa. Subsequently it became a training college for the Christians and became famous as Saint Paul College. Later, it came under the administration of Archbishop by about 1557 AD. Further it became a holy centre of Roman Catholics.

According to puranic stories and inscriptions, sage Parashurama brought Maithili Brahmin families and gave them all facilities to settle down in Goa. That is the reason why at least thirty percent of the Goan population consists of Brahmins. Goa was a part of Mauryan empire. One of the branches of the Mauryas came and settled down in Goa and they became famous as Konkan Mauryas. Even the Satavahanas of Karnataka ruled here for some time. It is of great interest to note that there was good trade between Rome and Goa and Goa played an important role in that trade activity. By about the end of 6th century AD, Kirtivarman’s kingdom, many parts of Konkan, included Goa also. Then the area round about Goa particularly during the period of Chalukya Pulakeshi IV, was a famous trade centre. By about 757 AD, Goa became a part of Rashtrakuta Empire. During this period, Goa was a great centre of trade activities. Foreign ships used to come to Goa and camp there till they sold their merchandise. Many traders used to come to the port at Goa and sold their products and made good profits.

A branch of the Kadambas ruled some parts of Goa and they became famous as Kadambas of Goa. They had their capital at Chandrapur (modern Chandur). Subsequently it became a centre of trade in which merchants of Arabian countries took part. Goa became a great centre and it was believed that if they sold their merchandise, they are sure to get more profits as compared to others of the Deccan. This encouraged more traders to come to Goa.

During the period between 1104 and 1148 AD, Goa reached its peak as a centre of trade. In about 1142 AD, king Jayakeshi established efficient administration in Goa. Afterwards many agraharas were established and Brahminism was encouraged; Kamala Nayana and Sri Mahalakshmi temples were built, and they are flourishing well even now.

Malik Kafur, a General of the Delhi Sultanate under Alauddin Khilji, after invading Goa, took away a large amount of gold and silver to his country and thus Goa became comparatively poor, but later Goans made it a rich State by their brisk trade. This is known from the writings of Ibn Battuta. Thus by about 1600 AD, Goa Kadamba dynasty came to an end.

After defeating Muslim Sultans, the Marathas became prominent. Then the Portuguese ruled for a long period, for more than four centuries till 20th Century AD. Unfortunately, the Portuguese became despotic and people rebelled against the Portuguese. In 1928 AD, Goa Congress came into existence and they began to fight for their independence.

When India became independent in 1947, they asked Portuguese to go out of Goa but they refused to do so. Then a committee was formed to fight for the Independence of Goa which became a part of independent India on 19th December 1961 with all these difficulties. However, Goa became a benevolent Government and encouraged trade.

Another two specialties of Goa are a drink called Fenny made of Cashew and the Cashew Nuts. Cashew is very inexpensive and for a kilogram of Cashew, in other parts of South we have to pay double the price. Their quality is good. Hence, people who go to Goa buy Cashew in abundance. Thus Goa has been famous for its Cathedrals and Cashews apart from its Casinos and Beaches.