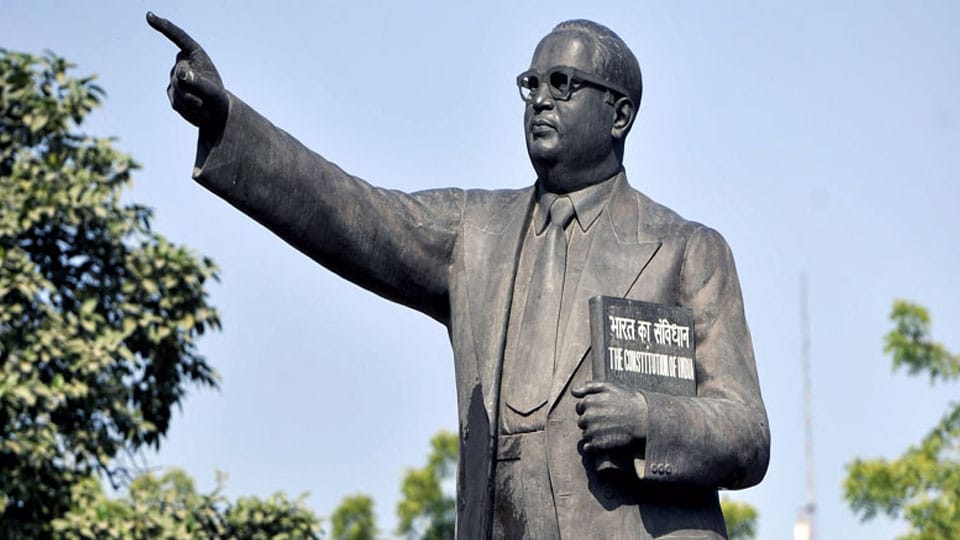 Homage to Dr. B. R. Ambedkar

Yesterday, the 14th of April, was the 127th birthday of Dr. B.R. Ambedkar and it was celebrated all over the country with admiration and gratitude by schools, colleges and other organisations. There are many Ambedkar Bhavans also which celebrate his birthday as also arrange lectures on his thoughts and deeds.

It is my experience that even small villages have the statues of Dr. Ambedkar and if possible Ambedkar Bhavans. Thus people all over India have been paying homage to this savant who was a prominent person in drafting the Indian Constitution, in addition to being a champion spokesman of the downtrodden. Most of us are familiar with these two contributions of Dr. Ambedkar but not many are familiar with his illustrious career spanning over many decades.

Bhimrao Ramji Ambedkar, popularly known as Babasaheb, was born on 14th April 1891 in a village called Ambavadi of Ratnagiri district. Born into a family known as Mahars who belonged to the Scheduled Castes (SCs) community, he was looked down upon with contempt. He decided to get good education and show to the people that SCs could also become educated along with others. He obtained BA degree in 1912. The Maharaja of Baroda recognised this brilliant young man and sent him for higher education to Columbia University in America. A hard-working student, he naturally obtained a Master’s degree with specialisation in Economics, Political Science and Sociology.

Not satisfied by Master’s degree, he did research and obtained a Ph.D Degree. He did not settle down comfortably in America but wanted to serve his own countrymen, especially the downtrodden and he returned to India in 1917.

There were many invitations for him to become a professor when he returned with a Ph.D from Columbia. He accepted to be a professor at Sidenham College and worked there for some time. Again he went to America and on his return he went to London and completed his law degree and became a Barrister. There he wrote in 1922 a thesis on the subject of the problem of Indian rupee and obtained a D.Sc degree for this thesis. He returned to India in 1923.

Then he enrolled himself as an advocate in Bombay High Court. Subsequently, he became a consultant for many financial organisations and earned a good name and fame. In 1926, he became a Member of the Bombay Legislative Council. He made speeches regarding many laws relating to land tax, hereditary land ownership, prohibition of consuming and sale of liquor etc. Thus he paved the way for many later reformers to work in this direction.

After the Simon Commission he became very active in propagating India getting independence. Observing his service in various fields and his scholarship, he was made the Principal of the Law College in 1935. He became an established advocate and many litigants thronged his office with an intention to handover their cases to him. They all felt that once Dr. Ambedkar took up their case, they would definitely win the cases. But Dr. Ambedkar chose only such cases in which there was justice. He did not charge any fee from the poor clients and argued their case effectively and tried to get them justice. Thus he became famous as poor clients’ advocate and they all looked upto him as their saviour.

In spite of his multifarious activities he wrote articles on Law and Advocates. In his opinion advocates are an important limb of the society but they should not exploit the clients; they should be humane in their approach because they are dealing with human beings and laws are there only for the people of a country; advocates should not assume more importance than required; they should act as a bridge between the clients and the Judge/Justice and this knowledge is more important for all advocates. Such advocates can create a good society.

Dr. Ambedkar, though a busy advocate, visited the Government Law College Library regularly. He used to ask the librarian to get new books and journals to the library for the benefit of the concerned. Because of his main efforts that library was considered the best in the Bombay Province. In 1937, he became a Member of the Legislative Assembly. Next year he resigned to the post as Principal of the Law College to concentrate on writing articles and books. In 1940, he published a book called Thoughts on Partition. He argued that the country should not be divided on the basis of Hindus and Muslims as Hindustan and Pakistan. He gave the examples of Turkey, Greece, Bulgaria and other countries and said that we should not commit the same mistake as they did.

In 1942, he became a Member of Viceroy’s Executive Council. In 1946, he came back to Bombay (now Mumbai) and started the Siddhartha College. In 1947, India became independent with the efforts of Mahatma Gandhi, Sardar Patel, Nehru and others. He was appointed as a Minister of Law in which field he was highly proficient.

In course of time, he was made an important member of drafting the Constitution. Incidentally, Kulapati Dr. K. M. Munshi, Founder of Bharatiya Vidya Bhavan (BVB) was also a member of the same Committee which drafted the Constitution along with others. The members of the Committee which drafted the Constitution have gone on record stating that Dr. Ambedkar’s part in it was major. That was the personality of Dr. Ambedkar. He gave importance to fundamental rights such as equality and freedom of speech. He also argued these should apply to non-Hindus like Sikhs, Jains and Buddhists.

He also advocated divorce quoting ancient writers like Kautilya, Brihaspati, Jeemootavahana etc. But the Government did not accept all these provisions fully and hence Dr. Ambedkar resigned from the Ministry. Finding that the development of SCs did not take place as he wanted, he embraced Buddhism is 1956 along with about 2 lakh SCs.  Ambedkar is not here with us today but he will live as long as our Constitution lasts. He is a real Bharat Ratna.