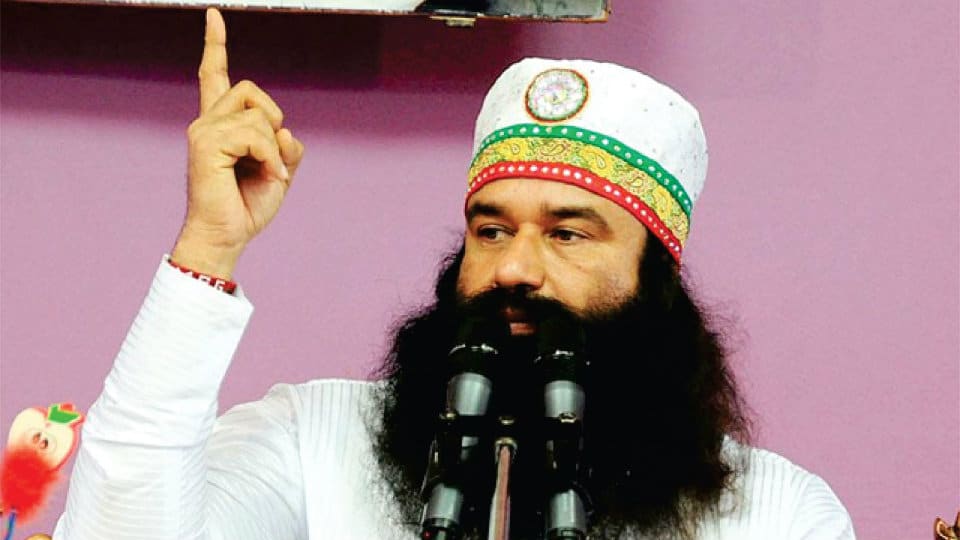 Salutations to Lord Ganesha. Thanks for the holiday provided to worship, praise and feed the Lord who removes all obstructions in the life of believers who surrender to His glory and power.

Being cooped up in the house, I scanned the day’s newspapers and then switched on the TV, the news channels. The greatest newsbreak of the festive day was the verdict to be delivered at 11.30 am – 2.30 pm and finally delivered 3.30 pm in the infamous rape case of Gurmeet Ram Rahim Singh, the Founder and Head of the Dera Sacha Sauda in Haryana, by the CBI Court.

The case against him was filed in the year 2002 and it has taken 15 years for the Court to deliver justice. It was like Gajagarbha — an elephantine pregnancy. Early to conceive, 22 months to deliver. But it is of great consolation the delivery happens. So it was with the case against Ram Rahim where the delivery came after 15 years !

One must indeed commend the courage of those two women or girls who accused the most powerful Godman of this heinous crime and displayed an unusual grit to pursue it relentlessly, despite threats to life, till the end. It all began when a journalist,  Ram Chander Chhatrapati of ‘Poora Sach’ daily, exposed the rape case by publishing the letter written by a Dera Sadhvi to the  then Prime Minister Atal Behari Vajpayee. It is sad that this journalist was later found murdered. One wonders what happened to that murder.

Even in this rape case, according to one TV channel, the verdict was based on the accusation and evidence given by the complainants only as the accused refused to defend his case. Small wonder for what reason. Was it on the assumption that the Court would reject the evidence of the complainants considering that he has the support of  lakhs of his followers, as we have seen yesterday. He also must have banked on the political patronage he was enjoying with the BJP government both at the Centre and in Haryana. BJP could walk away with Haryana easily in the 2014 election because of the absolute support from Ram Rahim, who has huge following specially of the poor and dalits, according to reports now emerging.

READ ALSO  An appreciation: Who is she?

Therefore, Ram Rahim must have assumed that it was “pay back time” for Haryana government and so had expected to get his “pound of flesh” from the BJP government. How? May be, like it happens in selected cases in our country by the intervention of the BJP government with the Judiciary. Mercifully and by the grace of providence, it did not happen. The mighty accused must have thought the Court would drop the charges as if it was a hot potato; which, of course, it was. Let us salute the Judge of the Court for not dropping the hot potato and for holding the scales of Justice evenly. Justice should not only be done but it should also appear to have been done. This Judge has succeeded in upholding this principle of jurisprudence meant to refurbish the public confidence in the Judiciary.

The convict Ram Rahim Singh is now aged  50. Well-built, youthful and should be an object of desire for many in the opposite sex. Naturally, many were his conquests — over 60 reported but it was left to the two in the present case to accuse him of rape. At the time of this rape, he was only 35 bursting at the seams with sexual prowess. To wit, well, after all, he is a Spiritual Guru who wanted to teach these women the secrets of “Tantra” meditation practiced by Lord Shiva and His consort Goddess Parvati ! Let it be.

Let me recall here his Mysuru and Kodagu connection. According to rumours, he had to leave Haryana, nay North India, for his personal safety having made more enemies from the established religious organisations and other rivals. He was staying at his Prarthana  Mandir in Siddalingapura between Mysuru and Srirangapatna for over a month.

He had also gone to the top-end holiday resort ‘Tamara’ near Kakkabbe in Kodagu and stayed there too. I learn, a few days before Ram Rahim Singh went there, some of his security personnel went there incognito and stayed in the rooms by way of surveillance.

With a little intelligence job of my own, I was able to gather some information about his stay at ‘Tamara’ for three days in 15 rooms occupied by himself and about 10 lady security guards dressed like Qatar Airways air-hostesses with a similar headgear. All others of his convoy of about 40 stayed in surrounding Home-Stays. Since he drank only fresh milk, the devotees would go to villages and milch the cows themselves.

The Resort management was asked to play his music in the dining hall, where he used to come and sit on a specially done up chair and the Resort staff asked to bow-low, bend and show him respect whenever they saw him. Probably his men and women thought people in Kodagu are also like people in Haryana. The suggestion was rejected, rather ignored.

One day he gave a 15-minute discourse to the staff and distributed his lockets. Among the fleet of cars was a Quad bike, may be for the reason that in case the Godman gets the urge to ride…

‘He is a huge personality with lot of hair on his body,’ I was told. I was also told that he had Z-category security.

Be that as it may, it is understandable that for a man of such a physique and physical fitness he must be having strong testosterone to discharge and naturally the females with matching strong oestrogen must be there as enablers!

Whenever I think or write about people like Ram Rahim Singh or mafia lords or politicians of high hubris, I remember the immortal words of Hermann Hesse, the German Nobel Laureate who wrote in the book Siddhartha — “The man of power is ruined by power, the man of money by money, the submissive man by subservience, the pleasure seeker by pleasure.”

Look at history, Indian history is enough, you will find these men (and women) of power, money, servility and the epicurean urge getting ruined by their own conduct. This Godman Gurmeet Ram Rahim Singh is no different just as the other Godman Asaram Bapu, who is now cooling his heels in the jail for the same offence. And remember, power comes from the barrel of a gun. Who said this?