Home » Feature Articles » Mysuru all set to bat for KPL 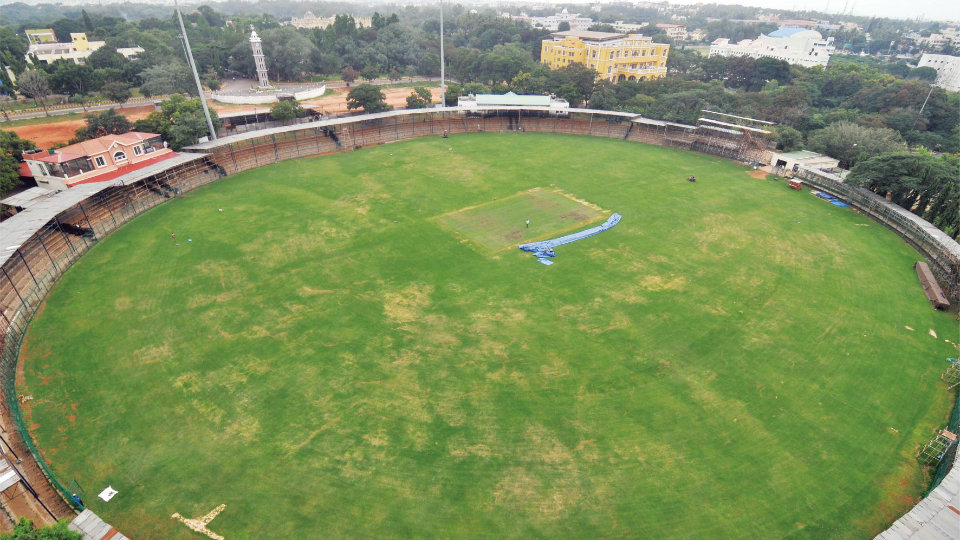 Mysuru all set to bat for KPL

It’s time for the most awaited cricket carnival of the State. Yes! The sixth edition of Karbonn Smartphones Karnataka Premier League is all set to begin at the famous Chinnaswamy Stadium on Sept. 1 and later will be spread to Mysuru for the second leg and Hubballi for the final leg of the tournament.

While the first leg of the tournament will be for just a couple of days on Sept. 1 and 2 at the Chinnaswamy Stadium, the matches will be played at the SDNR Wadiyar Stadium in Mysuru (Sept. 4 to Sept. 12) and KSCA Stadium in Hubballi (Sept. 14 to Sept.23).

This year will mark the comeback of that Bengaluru franchise in the tournament since 2014. The franchise has now been bought by Bengaluru-based Kalyani Motors have bought the team for the sixth edition KPL and team has been named Kalyani Blasters Bengaluru. Meanwhile, the KSCA Mysuru Zone has prepared wickets for the tournament and is also making necessary arrangements for the KPL’s sixth edition. Works related to setting up of spectator galleries, commentary box, Maharani Box, franchise box, sight screen, camera stand and others is underway.

Like every year, the arrangements at the SDNR Wadiyar Stadium in underway with workers making seating arrangements and erecting the sight screens. Around 8,000 to 10,000 spectators are expected to watch the matches at the Stadium. A total of seven teams including Mysuru Warriors, Belagaavi Panthers, Hubballi Tigers, Bijapur Bulls, Bellary Tuskers, Namma Shivamogga and Kalyani Bengaluru Blasters will be battling it out to win the coveted title.

The tournament will begin with Hubli Tigers taking on Belagavi Panthers during the inaugural match on Sept. 1, while the second match on the following day will feature the newest team Bengaluru Blasters facing Mysuru Warriors at the Chinnaswamy Stadium in Benagluru following which the tournament shifts to Mysuru. 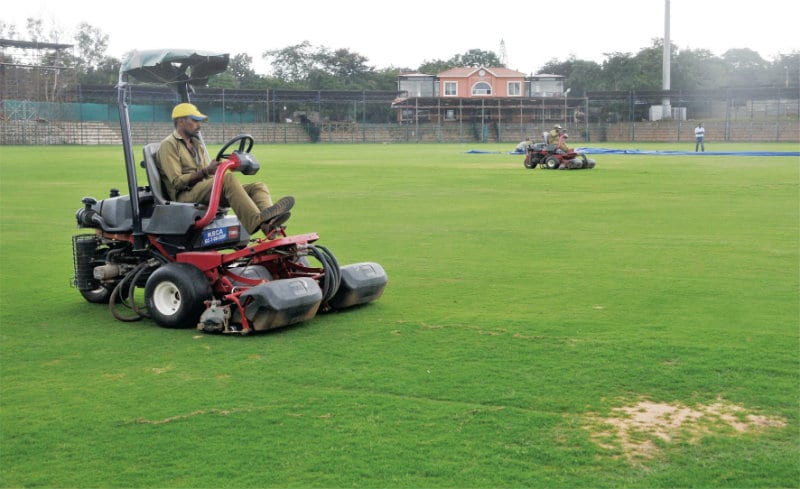 The SDNR Wadiyar stadium will host 12 matches in all before the tournament heads to its last leg at KSCA Rajnagar Stadium in Hubballi where the matches will be held from Sept. 13 to Sept. 23.

With a total of 21 matches being played in the league stage, the top four teams will qualify for the semi-finals to be held on Sept. 20 and Sept. 22 before the final match to be played on Sept. 23.

This year, all the teams will sport a fresh look with team managements buying new set of players during the auction held at the Chinnaswamy Stadium on Aug. 6. A total of over Rs 2.06 crores was spent on 126 players.

The Pool A players, naturally, sizzled most at the auction tables, with both K. Gowtham and Amit Verma going for a massive Rs. 7.2 lakh each. Ballari Tuskers saw off competition from both Bengaluru Blasters and Mysuru Warriors to win the signature of Verma, while the battle for Gowtham involved as many as five of the seven teams. Hubli Tigers and Bengaluru opened the bidding, before Mysuru, Ballari and Belagavi Panthers all entered the race. However, it was Belagavi who held firm in the face of some exceedingly intense bidding to secure the signature of Gowtham.

The bidding war naturally thrilled Amit Verma. “I never expected to go for this amount. But I’m very happy that I’m back in Ballari, because I actually wanted to be back with the same guys. We’ve got some real good players. Aravind Reddy actually had told me he wanted me back in the team. But even then, I didn’t expect to go for this much. But I’m glad and am looking forward to the tournament,” said Verma. 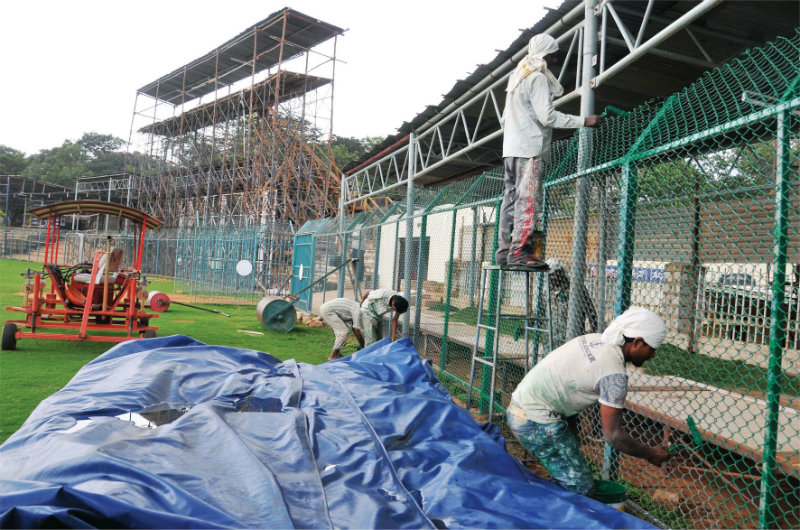 Workers are seen painting the fence at the SDNR Wadiyar Stadium. [Pics by M.N. Lakshminarayana Yadav]

Mayank Agarwal also breached the Rs. 7 lakh mark in what was another bidding war that involved almost all the participant teams. Ballari opened the bidding but was soon challenged by Bijapur. The price rocketed up soon, but that didn’t deter the teams. Mysuru and Hubli joined in the battle as well, and after the Rs. 6 lakh mark was breached, Bengaluru threw their hat in the ring. Eventually, Bengaluru and Hubli were the only teams in contention for Agarwal. Bengaluru pulled out after the Rs. 7 lakh mark was touched, giving Hubli their prized player.

There were others in Pool A who went for big money. R. Samarth was picked up for as much as Rs. 5.9 lakh by Bengaluru, who saw off both Ballari and Bijapur for his signature. Anirudha Joshi was the subject of a fierce battle between Mysuru and Namma Shivamogga, the latter eventually picking him up for Rs. 5.8 lakh. Prateek Jain was another player who excited the tables, with all of Ballari, Bijapur and Mysuru vying for him. Ballari, who kept the paddle raised throughout, ended up winning that battle, claiming Prateek for Rs. 5.5 lakh.

Ballari was the first among all the teams to reach their quota of five Pool A players, having signed up K.L. Rahul, K.B. Pawan, C.M. Gautam, Verma and Jain for a total of Rs. 16.7 lakh.

The Pool B auction had more than its share of exciting bidding as well. That was no more evident than in the tussle for the batsman R. Jonathan, who became the costliest Pool B player from the 2017 player auction. From the moment his name was drawn from the lot, there was a prolonged tug-of-war between Shivamogga and Bijapur.

The price shot up and kept going till eventually, at Rs 5.10 lakh, Bijapur decided to pull out. Shivamogga emerged with an exciting talent.

Stalin Hoover’s was a similarly impressive bidding battle, Belagavi securing his services for Rs. 4.5 lakh after seeing off competition from Ballari. Dikshanshu Negi’s was a similar story as all of Bijapur, Ballari and Hubli tussled for his services. His price screamed past the Rs. 4 lakh-barrier, before Bijapur sealed his name on their roster for Rs. 4.4 lakh.

M.G. Naveen the all-rounder, was also the subject of interest from Bijapur and Ballari, till he was eventually secured by the former for Rs. 4.2 lakh. After the main round of auction, the unsold Pool A players were called back, meaning Kunal Kapoor was back up for grabs. Ballari pounced on the opportunity to pick him up for Rs. 2.9 lakh.

Meanwhile, the cricket buffs Bengaluru and Mysuru can purchase tickets for the tournament by logging on to www.ticketgenie.in. Tickets for the third venue, Hubbali, will be made available shortly. The tickets on sale are not match-specific.

They are matchday-specific, which means fans can enjoy a double-header with a single ticket per head. Furthermore, tickets will also be available at the respective stadiums within three days of the first match at each venue.