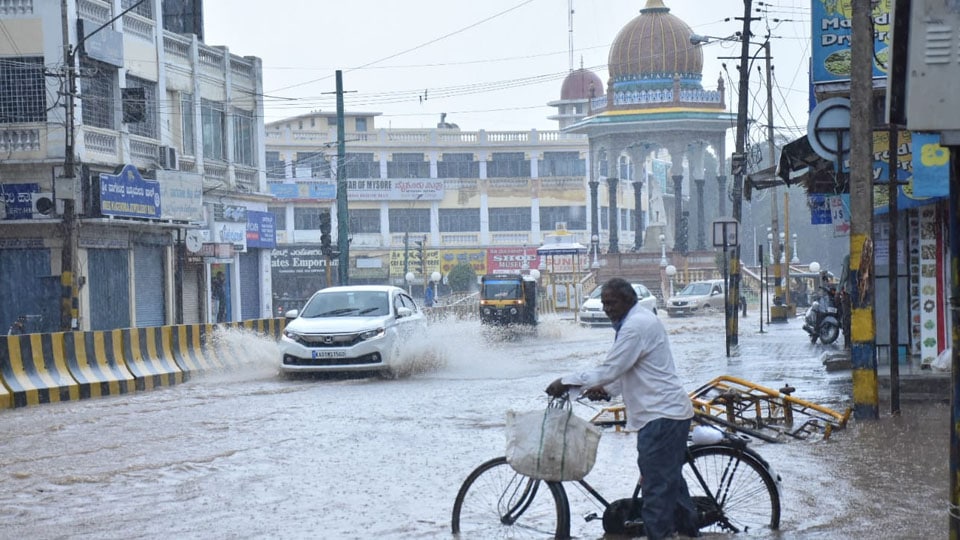 Mysore/Mysuru: It rained cats and dogs in city last evening and roads turned to rivers, drainages and stormwater drains overflowed and as usual, water entered houses and hotels in low-lying areas. It was just a drizzle at around 3 pm and later it grew into a heavy downpour.

Fortunately, it was a Sunday and most of the shops and business establishments even in the Central Business District remained closed due to weekly holiday and also COVID-19 scare. There was less movement on the streets and there was no usual traffic rush. Those vehicles that ventured out had to wade through waters and some of them broke down on the middle of the road.

According to Dr. C. Govindaraju of Organic Farm and Research Station, Naganahalli, it rained 15 mm to 20 mm last evening. He said that there will be moderate to heavy rains in the next three to four days and it is the ‘Ardra’ rains (from June 22 to July 5) that is lashing the city. From July 6 to July 19, it will be ‘Punarvasu’ followed by ‘Pushya’ (July 20 to Aug. 2). “All these rains will be helpful for paddy farming activities,” he added.

Yesterday’s rain caught many people unawares. They had not anticipated the sudden downpour and they were forced to take shelter at many places including bus shelters, petrol bunks, under-construction buildings and other places.

The intensity of the rain which increased gradually turned roads into rivers, flooded houses and other buildings in low lying areas besides making drains and even stormwater drains to overflow.

Roadside fruits and flower vendors had to pack their belongings and move to safe places to safeguard their perishable items.

Overflowing drains: Due to heavy downpour, the big drain from Vijayanagar 3rd Stage towards Bogadi 2nd Stage, the drains from MUDA to Yelethota were in full spate while the big drain near Niveditha Nagar overflowed on the road. This drain is clogged and water entered Anandanagar, flooding almost all roads.

Mysuru City Corporation (MCC) Development Officer Sathyamurthy and staff cleared the garbage in the drain and made way for smooth flow of rainwater.

Many roads in low lying areas such as Kanakagiri, Gundurao Nagar and Bhyraveshwaranagar were flooded with rainwater entering a few houses. Residents said that this is the problem they were suffering every year when it rains heavily. They said that the big drain at St. Mary’s Circle had collapsed causing more problems.

Meanwhile this morning, the MCC Abhaya Team staff were busy doing city rounds and clearing clogged drains while the personnel from Chamundeshwari Electricity Supply Company (CESC) were seen looking at possible problems and solving them to prevent danger.