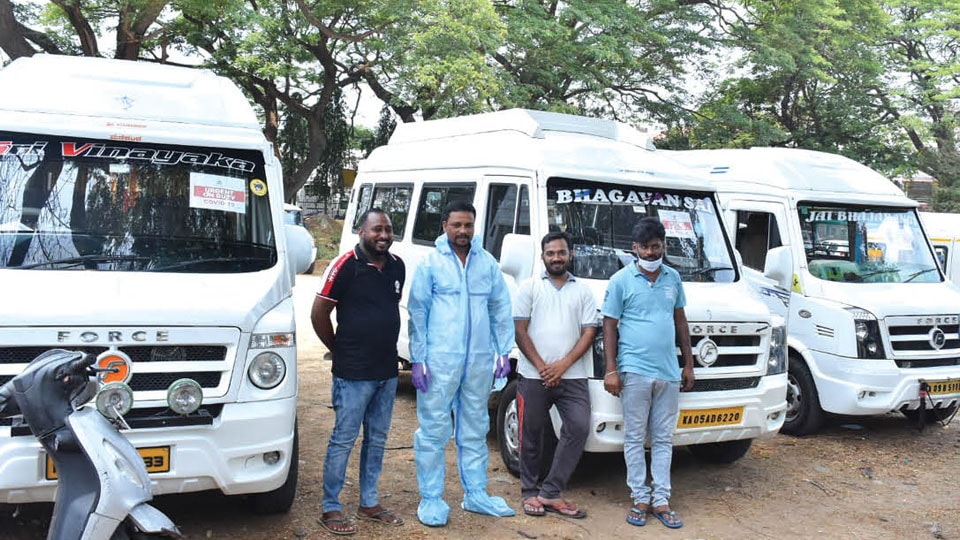 COVID War Room gets over 100 calls a day

• Most of the callers enquire about availability of ICUs, ventilator beds

Mysore/Mysuru: With the number of fresh COVID-19 cases surging on a daily basis, the Mysuru City Corporation COVID War Room (Control Room) has been receiving over 100 calls per day. Executives and doctors are working in the War Room — situated at the New DC Office at Siddharthanagar — round-the-clock answering calls of patient relatives to enquire about, and secure beds. At the backend, there are 22 data operators.

The War Room receives more than 100 calls every day and the calls have increased over the last couple of days. “Most calls that land up at the War Room are from those have severe fever since the last 10 days. These people have neglected the fever initially and are seeking help at the eleventh hour. The most number of calls received are for ICU and ventilator beds. We are ready to help them but at the same time, they must not neglect even slightest form of illness or cold,” Mysuru City Corporation Health Officer Dr. D.G. Nagaraj told Star of Mysore.

He added that most of the people who call the War Room are brought to various hospitals in the Government ambulances. “We are allotting beds based on age and oxygen levels; we check the complexities (co-morbidities) and determine the condition of the patient before the allotment of beds,” he said.

“The next type of callers are those who want to find out which hospital has the best treatment facilities and the number of beds available. The situation is not alarming as of now as we have taken enough steps to mitigate the suffering. But the advice for the people is to get tested as soon as they see any COVID symptom. Also, people under the designated age groups must get vaccinated voluntarily instead of procrastinating,” he appealed.

There are two operators working in the 24×7 War Room in two shifts and the night shift is managed by the shift-in-charge doctor. There are three doctors in the War Room and Dr. Seethalakshmi is the Nodal Officer. Other doctors are Dr. Manjunath who is the vaccination in-charge and Dr. Ashok who is the shift in-charge.

They have a back-end team of 22 data operators to generate the caller data and also vaccination data. The calls to the War Room have also increased because some patients call multiple times for inquiry of beds or other medical facilities, sources said. War Room can be contacted on Ph: 0821- 2957711.

Four ambulances added : Meanwhile, amidst reports from Bengaluru that private ambulances and certain ambulance drivers are charging ‘packages’ to shift the critically ill COVID patients from homes to hospitals and the dead from hospitals to crematoriums, the Mysuru City Corporation has added an extra fleet of vehicles.

The ambulances are used based on need and as soon as the War Room passes on information to the ambulance drivers to go to a particular hospital or to a home to pick up the sick. Also, whenever there is a need to shift the dead from the hospital for cremation, information is relayed by the War Room. “There is no shortage of ambulances and people need not worry. If at all there is a requirement, steps would be taken to add more vehicles to the fleet,” he said.

Over 12 teams have been put on duty to sanitise the homes of the infected to minimise the chances of the disease being spread. Two exclusive  ambulances have been readied to transport the dead from the hospital to ‘Mukthidhama’ crematorium in Vijayanagar  Fourth Stage.