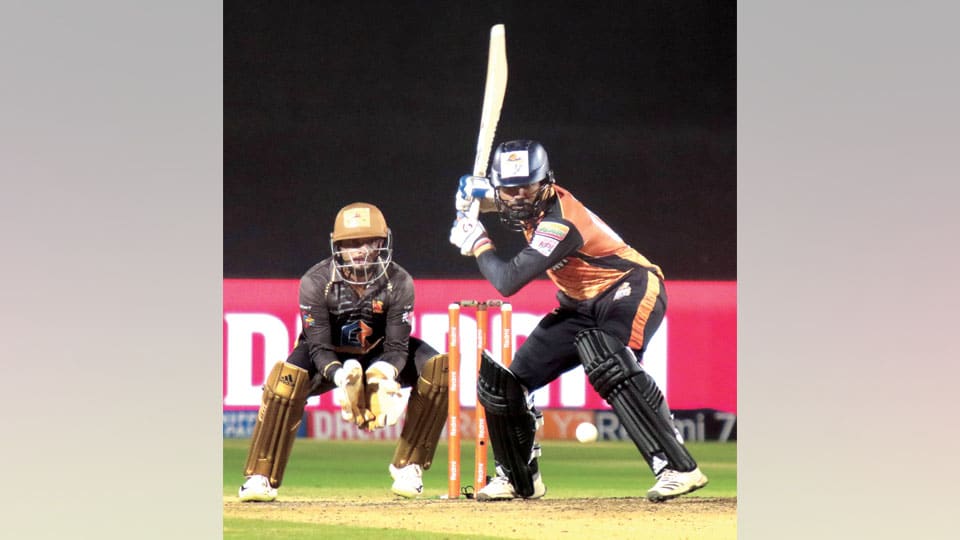 Hubli Tigers were at their proficient best as they notched a 20-run win over Shivamogga Lions at SDNR Wadiyar Stadium yesterday to make it to Qualifier 2 of this year’s Karnataka Premier League.

The Tigers now face Belagavi Panthers, the losing side from Qualifier 1, for a spot in the final against the Ballari Tuskers. Riding on a stellar show from their batsmen, the Tigers cruised to 190 for 5 in 20 overs in the face of a tepid show from the Lions.

When it was Lions’ turn to bat, they were made to realise just how loose they had been with the ball on a wicket which wasn’t conducive to strokes. They crawled to 170 all out in 19.3 overs with Mitrakanth Yadav returning figures of 3 for 18 in four overs.

But the game was as good as done in the first half when Lions’ normally stringent attack betrayed them. Lions needed something special from their batsmen, but barring knocks from Pavan Deshpande (38) and Abhimanyu Mithun (40) towards the fag end, they had nothing to write home about.

Opting to bowl, the Lions operated with very little direction and it was a problem which started at the very top as Mithun, the Lions’ skipper, looked out of sorts. The rest of the unit and the fielders weren’t particularly inspiring either.

Capitalising on this all-round lack of discipline, R. Vinay Kumar (55 from 45 balls), K.B. Pawan (56 not out from 39 balls) and Mohammad Taha (41 from 22 balls) had their way. If anything, the Lions got away with it because the pitch was a bit harder to play on than the one used on Wednesday.

In response, the Lions’ score (122) was near identical to Tigers’ 126 for 2 after 15 overs, but the difference was that the former had lost five more wickets at the same stage.