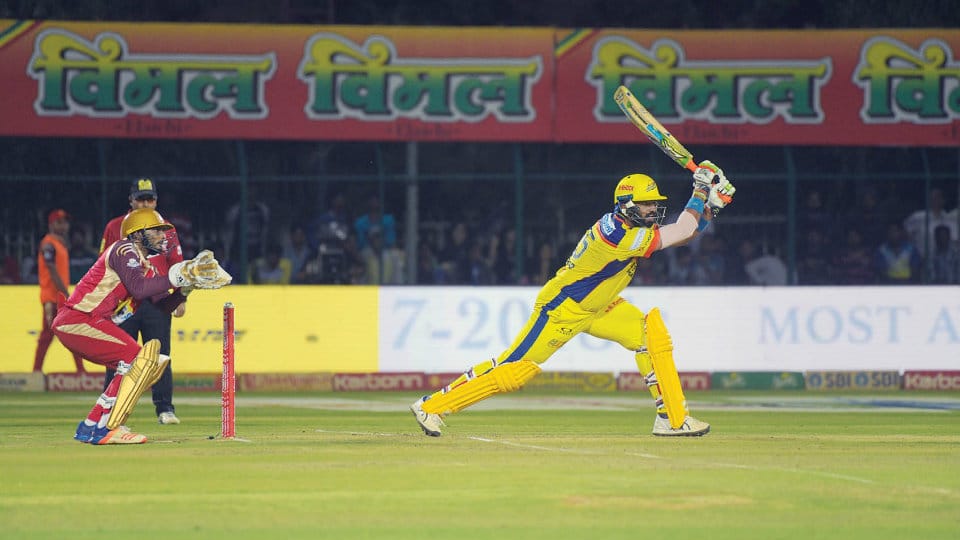 Mysuru: Mysuru Warriors put up a clinical show as they defeated Shivamogga Lions by six wickets in the Karnataka Premier League (KPL)-2018 tie played at the SDNR Wadiyar Stadium in city yesterday. Off the three matches that they have played this season, this was their second win.

After winning the toss, Shivamogga Lions elected to bat. Opener B.R. Sharath (46) utilised the field restrictions and set up the platform as they reached 50 for 1 in the 6th over. A few run outs and excellent bowling spells from leg spinners Kushal Wadhwani (2 for 15 in 2 overs) and Amit Verma (1 for 20) ensured that the opposition were all out for 146 in 20 overs. Aditya Somanna’s quick cameo of 39 off 20 balls ensured that the Lions reached a competitive total.

In reply, Mysuru Warriors chased the target comfortably. Openers Rajoo Bhatkal (59) and Arjun Hoysala (40) were in a destructive mode as they shared a partnership off 99 runs in 11.3 overs. Right from the word go, Raju Bhatkal 59 (45b,8×4,0x6) and Arjun Hoysala 40 (28b,3×4,2×6) showed no signs of mercy on the opposition as they smashed the ball all around the park.

It was a complete spectacle of late cuts, sweep shots, cover drives and lofts by the home team. A couple of wickets in the middle put some signs of concern on the Warriors. But a calm and composed Shoaib Manager ( 25 n.o.) guided the Warriors home.

Warriors scored 147 for 4 in 17.2 overs and are now placed third in the points table with 4 points. Bengaluru Blasters and Hubli Tigers have 7 points each. With no points in their favour, Shivamogga Lions have hit the bottom of the table with zero win.

The matches will be streamed live at Hotstar.com

Tickets available at: Insider.in and Paytm.