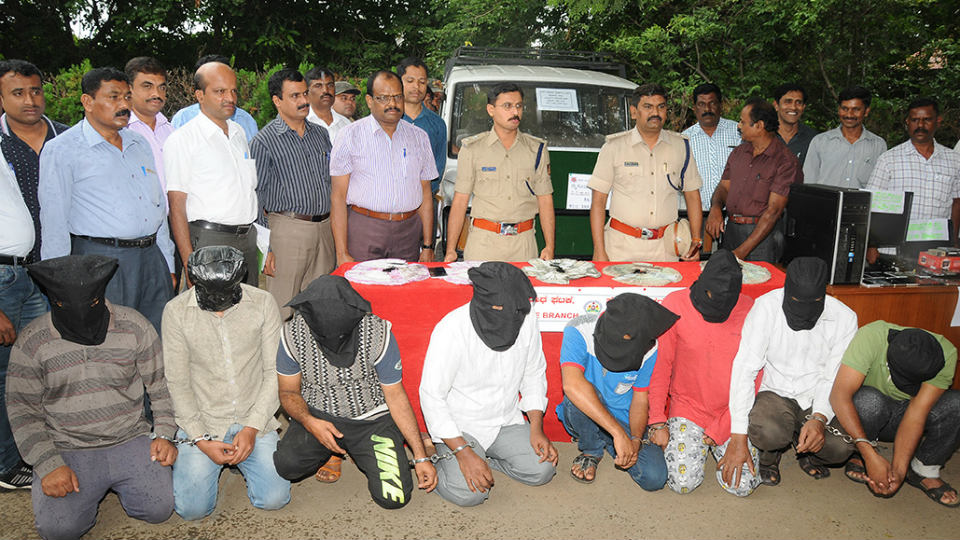 Mysuru: The city Police have finally cracked the sensational dacoity which occurred in upmarket Gokulam on June 23 where Rs. 28,81,340 lakh cash was looted with the arrest of eight dacoits. Two members of the gang, however, are yet to be arrested. All the arrested are from Bengaluru.

Announcing the cracking of the case while speaking to reporters at his office this morning, City Police Commissioner Dr. A. Subramanyeshwara Rao said that two teams had been formed to crack the case. The accused are Afsar Pasha (52) of Gurappanapalya in Bengaluru, R. Zakir (26) of Laggare and Syed Shabbir (45) of Vinayakanagar in Bengaluru. They were arrested on July 6 at Siddalingapura on the Mysuru-Bengaluru Highway.

Based on the clues given by the arrested, the Police, on July 14, nabbed Ismail Pasha (33) from Yeshwantpur in Bengaluru. He was arrested in Srirangapatna. Based on additional information, Khaleem alias Khaleem Punter (35), a resident of Gurappanapalya who was lodged at the Hindalga Jail in Belagavi, was brought to Mysuru in connection with the case. The other accused include Syed Aleem (23) of BTM Layout, Tabrez Pasha (25) and Asif (30) also from BTM Layout.

The dacoity was planned by Khaleem alias Khaleem Punter who managed to obtain a parole from Hindalga Jail by lying that one of his relatives was seriously ill. He was in urgent need of money and formed the gang after he came out of the jail on a month-long parole. Khaleem was involved in two more murders in Bengaluru, the Commissioner said.

READ ALSO  ‘Traffic rules are for your safety, follow them’

The Police have recovered cash worth Rs. 8,69,000, one mobile phone, one Tata Sumo that was used in the dacoity. Hunt is on for other two accused.

It may be recalled here that on June 23, at around 11.35 am, a 10-member gang entered the office of Naveen Kumar Gupta, Proprietor of Kyathi Steel Company based in Thandya in Nanjangud Taluk. The office is located at 23/1094 Gokulam 3rd Stage (4th Main, 9th Cross near Vidyavardhaka Engineering College).

After gaining entry into the office, the dacoits posed as CBI officers and demanded the keys of the shelves and cupboards. When the staff refused and instead asked them to show their ID cards, the miscreants thrashed the staff. They forcibly took the keys and made away with cash that was kept in a cupboard. They also took away the hard disk that had recorded CCTV visuals.

Confirming that the Enforcement Directorate (ED) has attached the immovable properties of former Corporator and history-sheeter C. Mahadesh alias Avva Madesha and his brother C. Manju in Mysuru worth Rs. 5.35 crore, City Police Commissioner Dr. A. Subramanyeshwara Rao said that all the benami properties of Madesha and Manju will now be attached.

“We will give information about the benami properties of Madesha and Manju to the ED so that they too can be attached. The properties have been purchased with ill-gotten money,” he said. Warning other rowdy-sheeters that their properties too will be attached by the ED, he said that the Police were keeping track of propertied purchased through extortion and threatening.