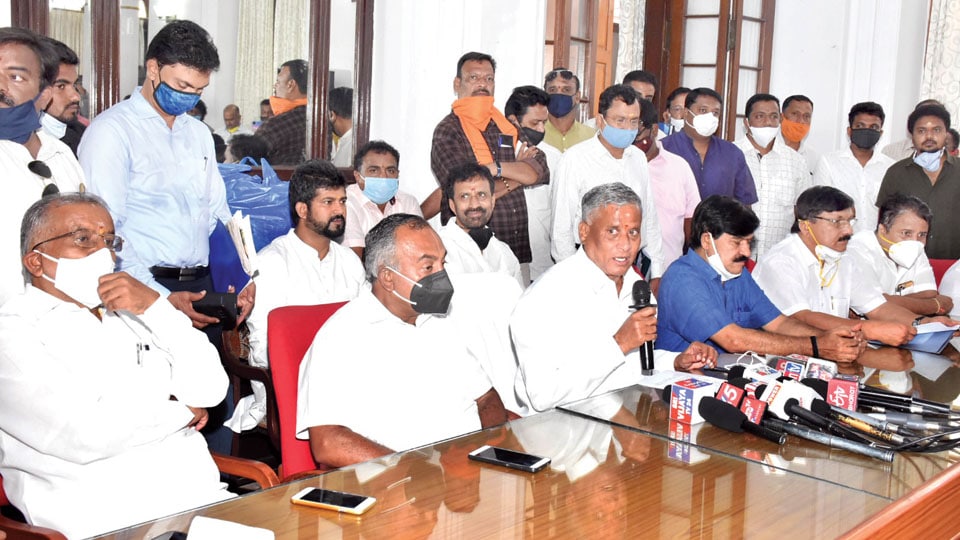 Mysore/Mysuru: Housing Minister V. Somanna today said that the Government is committed to meet its ambitious objective of ‘Housing for All’ for which it has launched many Housing Projects across the State.

Addressing a press meet at Government Guest House in Nazarbad, Somanna said that the Karnataka Housing Board (KHB) is executing 16 Housing Projects totally worth Rs.894 crore in 2,015 acres of land, including the prestigious KRS Nisarga Layout near Yelwal in the outskirts of the city.

Pointing out that the tender process for construction of 8 Housing Complexes in a total of 357 acres across the State has begun, Somanna said that it has also been proposed to execute 19 more Housing Projects in 2,736 acres of area at a cost of Rs.1,188 crore at different places in the State. The houses and plots of the KHB are in great demand as can be seen by the huge number of applications that the KHB is receiving, he contended.

Stating that a full-fledged Residential Layout will come up  in 100 acre area on the outskirts of Chamarajanagar shortly, he said that the KHB will execute similar Housing Project at Hanur-Kollegal in the district.

Maintaining that there is no dearth of funds in the KHB, he said that measures have been taken for digitalising 25,000 properties of KHB, collectively worth about Rs.3,000 crore and that the Board plans to augment its resources by disposal of its properties  from time to time.

Somanna added that the KHB recently earned Rs.400 crore through sale and allotment of a total of 1,536 properties, which included 1,134 residential sites, 380  houses/plots, 16 CA sites and six commercial complexes.

READ ALSO  Cauvery Theerthodbhava to be celebrated as per tradition on Oct. 17: Minister

Somanna later visited Suttur Mutt and sought the blessings of Sri Shivarathri Deshikendra Swamiji before proceeding to Yelwal where he distributed compensatory sites to land owners who parted with their land for the formation of KHB KRS Nisarga Residential Layout.