Home » Feature Articles » ‘Good sportspersons are born, not made’ 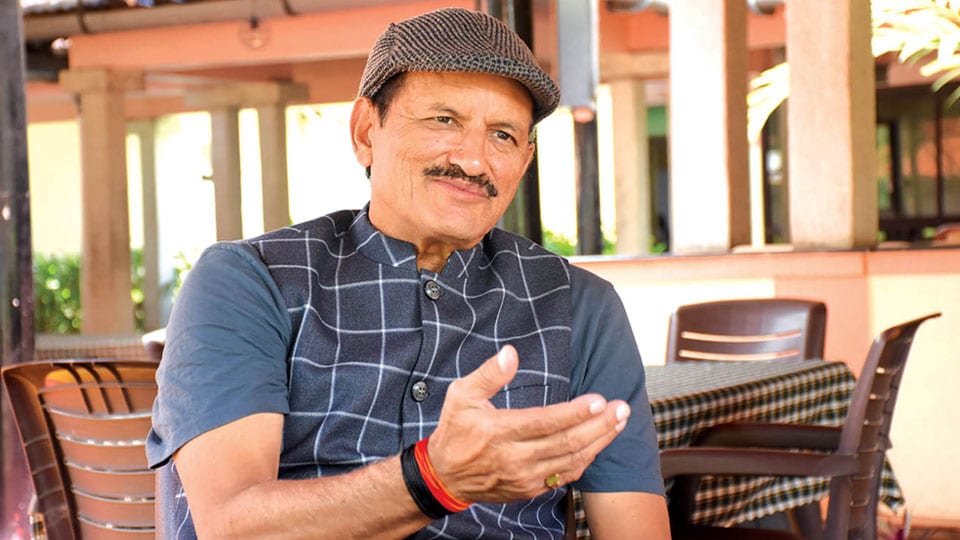 ‘Good sportspersons are born, not made’

“The Government must encourage hockey by making it a compulsory sport in Schools and Colleges. The basic need to encourage hockey is to have a proper ground for players to practice. Currently I am living in Indore (Madhya Pradesh) and giving training to 150 promising players on the ‘footpath’ because the Government has snatched our 70-year-old hockey club called ‘Prakash Hockey Club’.”

When ‘Chak De! India’ hit the silver screen in 2007, none knew that it was the story of a former Indian hockey player. Mir Ranjan Negi is one such great player who silently propelled Indian Women’s Hockey Team to become world champions in the 1998 Asian Games held in Bangkok. Later, the country recognised the tireless efforts of Negi whose role was played by Bollywood ‘Badshah’ Shah Rukh Khan, as ‘Kabir Khan.’

Star of Mysore caught up with Mir Ranjan Negi, who inspired Kabir Khan’s character in the movie, when he was in the city on a personal visit recently. Negi shared his views on Indian Hockey Team doing extremely well at the Tokyo Olympics. He also regretted how hockey is literally ignored in the country when compared to cricket. Excerpts…

Star of Mysore (SOM): What do you feel about the performance of Indian Hockey Team at the Tokyo Olympics 2020?

Mir Ranjan Negi: I feel extremely proud as it has been 20 years that no team from Asia has performed like this. Especially the women’s hockey team ranking 4th position on the chart, we have defeated those teams who ranked higher at the Olympics. Expectations are high and hoping to win gold for India (fingers crossed).

Captain of the team Rani Rampal’s performance in winning over South Africa (4-3) is the best thing I loved at this Olympics. Even the Men’s Hockey Team has a different combination as 8 seniors and 8 junior players. There is no void in the team and we have a world-class goalkeeper P.R. Sreejesh. Also this will be the last tournament for most of the players in the team. I always feel a good sportsman cannot be made. Rather they are born.

SOM: How do you describe Indian Hockey Team in one word?

SOM: Karnataka’s contribution to the field of hockey is immense, especially from Kodagu. Do you agree with this?

Mir Ranjan Negi: Yes absolutely, more than 50 hockey players from Kodagu have participated in international hockey tournaments. The Kodava family hockey tournaments have made it to the Guinness Book of World Records. No community in the world is contributing to hockey as much as the people of Kodagu are doing. I will meet M.P. Ganesh to thank him for his contribution towards hockey [Ganesh is the former Director of the Sports Authority of India].

Mir Ranjan Negi: Injustice was done to Major Dhyan Chand by the Union Ministry of Youth Affairs and Sports. There is a long process to win the highest awards. But cricketer Sachin Tendulkar won Bharat Ratna overnight. No process or rules were followed when it came to honour him. Even Ashok Dhyan Chand, son of Major Dhyan Chand, expressed his displeasure over this.

SOM: The current generation is fonder of ‘cricket’ and ‘football’ than hockey. What’s your take on declining hockey in India?

Mir Ranjan Negi: We cannot blame the current generation if they are fond of other sports than hockey. The blame should rest on the Indian Government for not promoting hockey. Craze for cricket and football is more in this country. That is why neither the Government nor the sponsors are coming forward to promote hockey.

SOM: What are your suggestions to the Government to promote hockey?

Mir Ranjan Negi: The Government must encourage hockey by making it a compulsory sport in Schools and Colleges. The basic need to encourage hockey is to have a proper ground for players to practice. Currently I am living in Indore (Madhya Pradesh) and giving training to 150 promising players on the ‘footpath’ because the Government has snatched our 70-year-old hockey club called ‘Prakash Hockey Club’. Indore is a financial capital but the city is not ready to provide a playground to encourage sports.

SOM: Tell us about your life journey from being a goalkeeper.

Mir Ranjan Negi: I played 4 years for Indian team from 1978-1982, life was shattered when India lost the Asian Games against Pakistan in 1982. The blame was on me and some alleged that I took money from Pakistan. The movie ‘Chak De India’ is nothing compared to what I went through after this. After 15 years, Jyothi, who had become the Secretary of Indian Hockey Federation in Chennai, gave me a second chance and I became the coach of Indian Women’s Hockey Team. At the Bangkok Asian Games in 1998, we won the gold medal after 32 years. This opportunity made me prove myself to the country. Later, Producer Aditya Chopra (son of Director Yash Chopra of Yash Raj Films) approached me and made a movie based on my life.

I was also working as Assistant Commissioner of Customs and retired from the post. Later I wrote a book called ‘Bloom to Glory’ and actor Shah Rukh Khan wrote the foreword.  I also appeared in a dance reality show ‘Jhalak Dikhlaja’ and now I am into training 150 aspiring hockey players in Indore.

SOM: Do you think making cinema on sports is a good way to encourage youngsters?

Mir Ranjan Negi: Definitely cinema is a strong medium to promote sports. Movies like ‘Chak De! India,’ ‘Bhaag Milkha Bhaag,’ ‘Mary Kom,’ ‘Dangal’ and others have already made an impact on the audience. I met a lot of youngsters who are inspired to play hockey by watching ‘Chak De…’ So making movies on sports or biopics on sportspersons will encourage others.

SOM: We can see corruption, politics and nepotism in every sport. What’s your advice on this?

Mir Ranjan Negi: We need a revolution in the sports field. Glamour and money has become part of every sport. I feel glamour and money is necessary as you observe players who come from small towns, their hairstyle changes, their mobile phone changes in fact their lifestyle changes for good. Government pays for cricket and all players get more money, like this every sportsman should get paid the right way. Corruption and politics do exist in every field and it depends on people how they fight it out.

SOM: What do you feel about visiting Mysuru?

Mir Ranjan Negi: I love visiting Mysuru every year as it has everything from greenery to historical places. The city is clean, the weather is good and it has got a rich history. I don’t visit Goa to enjoy my vacation, I visit Mysuru to enjoy every moment of my vacation.

When here I am usually in the good company of Mahesh Ballal, owner of Rock Salad, an event management company in your city, Mysuru. Mahesh and I have been friends for 35 years.

2 COMMENTS ON THIS POST To “‘Good sportspersons are born, not made’”