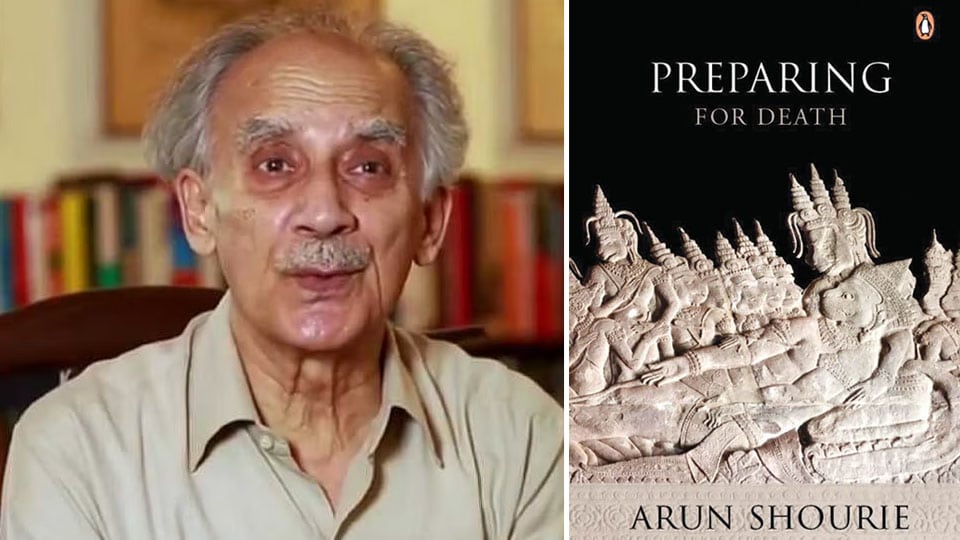 Just a week back, I finished reading the voluminous book, 500 pages, ominously titled “Preparing For Death” by Arun Shourie, presumptive scholar, journalist, who ruthlessly ended the political career of Abdul Rehman Antulay, former Chief Minister of Maharashtra, became the Union Minister (NDA) and gave an interview to me while in Mysuru !

There is absolutely not an iota of doubt that he is a prolific writer. But is there a need to write so voluminously? No matter it is a journalistic writing or a book, irrespective of the subject. Now, being a humble pen-pusher, quite aged, let me not dwell more into that kind of verbal jugglery. After all, he is an author of many scholarly tomes. I salute him for his perseverance and labour. But why write so much? Example: “The one certainty in life, the one appointment which each of us will just have to face, is the one for which we do the least to prepare — death.”

Verbiage. It could have been written, for example, “Death is an appointment we face with least preparation.” But here instead of 9 words, the blurb has used 29 words. Just like the text of the book. It is like fillers, as we call in newspaper page make-up, to adjust the column length or the space in the page whenever there is shortage of text. It only adds to avoirdupois. Let it be.

Reading this book is disturbing and raises many questions about God, religion, karma and rebirth. A dark question stares the reader in the face: ‘What about my death?’ What about the last days of my dear and near ones?’ Like that of the author of the book Arun Shourie — Anita, Aditya. Death puts its final stamp on every living creature, Godmen, Prophets geniuses and Generals. Death is no respector of your wealth, genius or power.

Hail, Thomas Gray the English poet who, in his rather long poem “Elegy Written in a Country Churchyard,” wrote  about death the great leveller:

“The boast of heraldry, the pomp of power,

And all that beauty, all that wealth e’er gave,

The paths of glory lead but to the grave.”

But look at the audacity of that Indian Mystic Osho Rajneesh. He wanted this to be written in his tomb:

Well, common sense question: If never born, how he can visit this planet earth, no matter between two dates?

Only Sadhguru Jaggi Vasudev of Isha Foundation could counter Osho, as he said in one context: ‘If you are disembodied after death, how can you enjoy the good food or virgin doe-eyed beauties in heaven promised by our religions?’ Much less visit this planet earth?  Perish                              the thought.

Now to return to Arun Shourie’s book, despite the abnormally long shadow of the  text, as I mentioned earlier, the book is readable for an unemployed old man like me with eyesight, by the grace of doctors, rather good !

The book is primarily about the Hindu spiritual persons and the way they died at different ages — Sri Ram (a divinity), Buddha, Ramakrishna Paramahamsa and Ramana Maharshi. Much is written about Ramakrishna Paramahamsa and Ramana Maharshi, both of whom died under the agony of extreme pain for months due to cancer. Why? Could they not cure themselves with their divine powers, as their devotees believed them to possess?

And then there is Vinoba Bhave, a Gandhi ‘Bhakt’ steeped deep in God and religion. But Gandhiji himself was killed by an assassin not giving him time to prepare for his death. Hey, Ram !

The book begs itself many questions, including about Arun Shourie’s wife and a handicapped child, that are spiritually provoking.

Is there a GOD supervising each individual’s destiny on this earth? A loaded question indeed. And the answer is in this anecdote which, I am sure, many of my readers might have heard or read:

Two cosmonauts had come down to earth after circling the globe. A grand reception was held for them in the Kremlin. As every one was drinking away, Khrushchev took the two cosmonauts aside, lowered his voice and asked, “Tell me something, when you were up there, did you see an old man with a long white beard (God) looking down on earth and directing what  should happen?”

The cosmonauts looked at one another and in a sheepish voice said, “Yes Sir, we did see him.”

“That is what I was afraid of,” Khrushchev said, “But don’t tell anyone. Let this be a secret between the three of us.”

And then there was the reception that the Pope held at the Vatican to these cosmonauts. Here, the Pope took the two cosmonauts aside and asked the same question that Khrushchev had asked at            the Kremlin.

They looked at each other, remembered the promise made to Khrushchev and  said, “No Sir, we did not see anyone like that.”

“That is what I was afraid of,” the Pope said, “But don’t tell anyone. Let this be a secret between the three of us.”

Be that as it may, here I would like to say that I have read about Ramana Maharshi (specially the book written by Paul Brunton) and about Ramakrishna Paramahamsa (a few, including by ‘M’ that Arun Shourie mentions). Both did not impress me at all or ‘enlighten’ me to dispel my ‘spiritual’ ignorance nor quench my spiritual thirst.

Of God much more. No wonder, when Ramana Maharshi was taken to Somerset Maugham for an interview, Maugham did not ask him any question but simply left the room after a while! For sure, Maugham knew enough “Of Human Bondage”!

Ignorant of existential truth about life, about death much more. But about “Preparing For Death”, yes this book enlightens us about the need for leaving a Will and creating a Trust as per the life situation.

Hello, Barman,  I am prepared to go. Where is my Johnnie Walker ?!