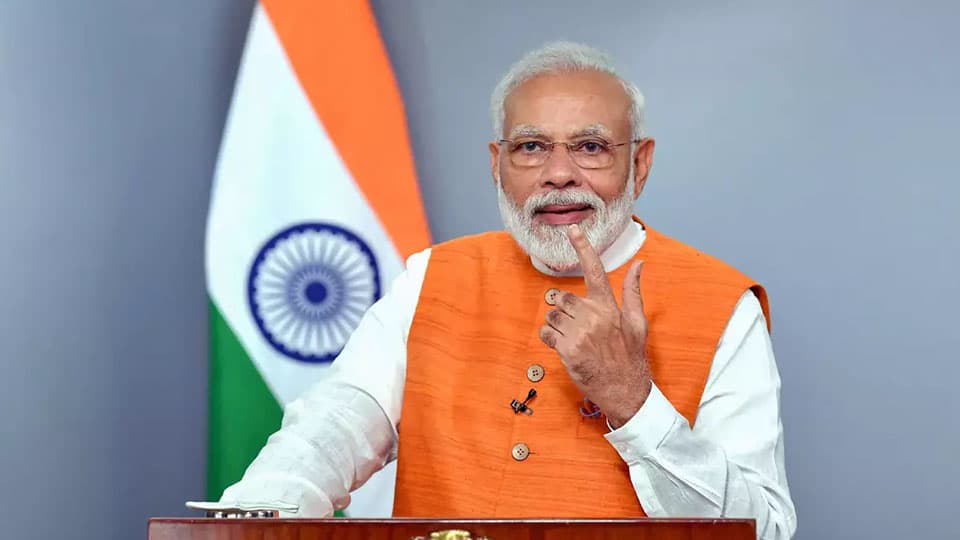 Today, Narendra Modi completes 100 days in Office in his second term as the Prime Minister of India. As I reflect about India’s past years after Independence since 1947 and the years after Modi came to power in 2014 and 2019, I get a gut feeling that it was only providence that brought a leader to lead India like Narendra Modi.

As BJP’s tall leader, he never goes after shabasgiri like another tall leader of BJP Atal Bihari Vajpayee, who merely walked along the path trodden by the Congress. Let it be.

Nehru’s speeches in the Parliament and outside had a ring of philosophy and pragmatism. I still remember that one of his speeches at the Bangalore Central  College Grounds in the early 60s telling the audience the difference between a man and an animal. He then, in a lighter vein, said “Of course, man can smile but animal cannot.”

Anyway, Nehru’s early periods as Prime Minister were simply visionary in his approach to our country’s development, of course, under  Government’s initiative and control. This was inevitable then at a time the country was bereft of Heavy and Medium Industries and was too backward in health, education and more importantly scientific research. As a result, he gave us Hindustan Aeronautics Limited (HAL), Hindustan Machine Tools Limited (HMT), Indian Telephone Industries Limited (ITI), Central Food Technological Research Institute (CFTRI), all established in Karnataka. Likewise, Dams and Steel Factories were established so also Universities. He rightly called these Industries and Dams as the ‘new temples of India’ in his speech while inaugurating the Bhakra Nangal Dam. Sadly, over the years the euphoria faded away.

Those who ruled in between the years of Nehru and Modi were mere power-mongers and did everything in the name of the poor to strengthen their own vote-banks and promote crony capitalists. They came to be known as members of the Lutyens’ Club. The country was heading towards heavy corruption and great security risk not only to the Nation but also to the innocent people and the vital installations of our country. The reason is not far to seek. All for the sake of appeasing the Muslim minority who formed the cutting-edge voters across the country to win an election. The country, as a result, went soft on our neighbour Pakistan and also in dealing with the       terror suspects.

No wonder, our present Defence Minister had expressed his exasperation at our Western neighbour Pakistan saying, “No country in the world should have a neighbour like Pakistan.” Till Modi came to power India remained a “soft country” heading towards becoming a banana republic.

Asked about Modi’s 100 days in Office, Rahul Gandhi answered saying, “Hundred days but no Vikas.” Hearing this I began to scratch my head to find out not what Modi did in 5 years and 100 days but only in 100 days of his second term. The first ‘Vikas’ that came to my mind was what Modi did for the people of Kashmir, Jammu and Ladakh — one is the Muslim majority in Kashmir Valley, another is non-Muslim majority with Hindus and others and the third one Ladakh, the Buddhist majority region.

A temporary Article 370 and 35A added to the Constitution much against the opposition of Dr. B.R. Ambedkar, the Father of our Constitution, as a lateral thought for Muslim appeasement which was a political expediency for Congress at that given point of time, was allowed to remain in the Constitution for 72 long years!

This Article is not only discriminatory to non-Muslims but also detrimental to the development of J&K. The abrogation of these Articles by Modi Government is the greatest achievement in his first 100 days. What no other Government in the past dared to do, Modi has done.

The next achievement that came to my mind was the Bill against Triple Talaq. I also remembered Kulbhushan Jadhav’s case that India fought at the International Court of Justice (ICJ) and won. India’s success in isolating Pakistan on the question of terrorism is another feather in the cap of Modi.

PM Modi has taken many steps to end terrorism not only across the J&K border but also across the country. He brought in the amendment Bill to declare not only an organisation as terrorist but also its individual leaders. As a result, apart from other individuals who were running the terrorist outfits, the underworld don Dawood Ibrahim is also brought under the terrorist tag.

I cannot but consider giving the greatest civilian honour of Bharat Ratna to our former Congress Union Minister and President of India Pranab Mukherjee as an important achievement of Modi. Another historic achievement crucial to our country’s security and population control is enforcing nationwide the National Register of Citizens (NRC) to curb illegal immigration of people from our neighbouring countries.

Many may think the Direct Benefit Transfer (DBT) that began when UPA was in power without the benefit directly reaching the beneficiaries because of corruption and middlemen, who were mostly from the Congress, was a failure. Yes, it was then. But under Modi even during the first term the money used to go to the Bank account of the beneficiaries directly thus eliminating middlemen and corruption in the DBT Scheme.

Here, how can one forget the surgical strike against the terror camps inside PoK and Pakistan itself? Are these not Modi’s achievements?

There are many, but the one that took the cake, as the saying goes, was the near perfect achievement of Chandrayaan-2 as seen by billions of people of India in the early hours of Sept. 7, 2019 where Modi was present to witness the historical event. There was a minor setback indeed but yet it was a super achievement of 98% success by Indian Space Research Organisation (ISRO).

Be that as it may, I was much moved and tears welled-up in my eyes while seeing Modi  embrace a tearful and disappointed Chief of the ISRO K. Sivan. Narendra Modi affectionately embraced him for almost a minute patting Sivan’s back as Sivan rested his head on PM’s left shoulder. In the morning when that episode   was shown on TV again, every time I saw it my eyes would get wet, voice choked. I used to walk away from TV for the moment. Was this not a great achievement within the 100 days of Modi’s second term in Office? It was also the quality of a Great Leader.

Seeing Modi embrace Sivan like a mother consoling her crying child, I remembered an incident in the life of Alexander the Great when he was on the Egyptian expedition. Alexander and his men had sailed to Egypt, famous for its desert and heat. When they landed they were all very thirsty. But in the desert there was no water to be found easily. Alexander sent out his soldiers to look for water and fetch it. After some time they came to Alexander disappointed but one soldier had brought water in his helmet and offered it to Alexander. Alexander held the helmet full of water in his hand and then addressed his men saying, “When my soldiers are thirsty I cannot drink this water.” So saying he splashed the water on to the dry hot sands of Egypt. That is the quality of the leader which  I saw in Modi at ISRO.

This one act of Modi set me thinking as to why in the annals of history only a few are called great  leaders with the word Great as a suffix to their names. Like Ashoka the Great, Alexander the Great, Akbar the Great and may I add to this illustrious list of leaders one more name? Modi the Great.