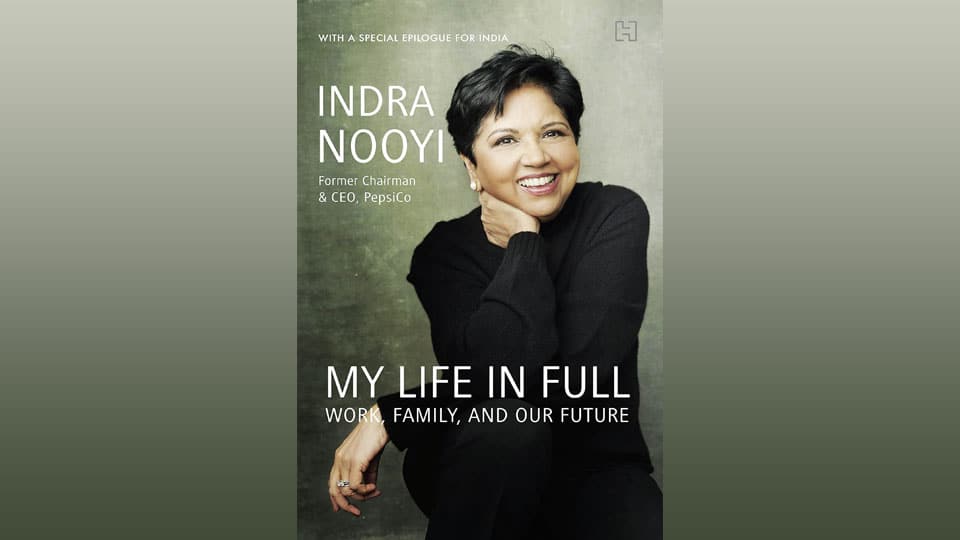 This is the story of a Hindu Brahmin girl Indra Krishnamurthy. She was born in October 1955 in Chennai (Madras). She was a middle child, dark-skinned, tall and skinny. She had an elder sister and a younger brother.

Her paternal grandfather was a retired District Judge. He built this huge house named ‘Lakshmi Nilayam’ using all his savings. That was because honesty was still the most valuable ethics of a Government servant! He was a Palghat Brahmin, being born there. And Palghat Brahmins are known for their ‘brain power’, considered highly brilliant and intellectual. No wonder, Indra’s grandfather A. Narayan Sarma’s DNA was genetically inherited by his grand-children. A bit more seems to be by Indra looking at her later meteoric rise in Pepsi Cola Company.

Indra’s father Krishnamurthy, not surprisingly, had a Master’s degree in Mathematics and worked in a bank, a business house eponymous with the name of his house ‘Lakshmi Nilayam’ (house of Goddess of Wealth). Her father’s advice to Indra: “We are investing in your education to help you stand on your own two feet. The rest is upto you. Be your own person.”

Those were the days when children found it impossible to defy the words of their parents like it is impossible to defy the law of gravity. So it was all-girls Catholic institution upto 12 years. And Indra was too good in the extracurricular activities also. Music, dance and even girl Scouts and Guides. She had even formed a music group, strumming guitar and singing english songs! She was fond of outdoors and naturally cricket!! A good debater and on top in elocution competition. Out of school, she enters Madras Christian College (MCC), the most sought after college that I too wanted to join in 1958 but could not as I was stranded in my ancestral house in Kodagu due to heavy rains and flooding for over a month. She chose Physics, Chemistry and Maths as her optional subjects. Here too her passion for cricket continued forming a women’s cricket team. After three-year degree at MCC, Indra goes to Indian Institute of Management (IIM) Calcutta. Of course, the admission process to IIM is indeed gruelling but Indra came out successful. Seems she does not know failure, no matter what the competition is. She was a teenager — just eighteen!

In retrospect, the road to her future career was laid at the end of her first year at IIM, Calcutta when she landed a summer internship at the Department of Atomic Energy in Bombay. She was to look at the construction schedule of six nuclear power plants… She assessed the issues they were up against in implementing the task. She found the project lacked state-of-the-art technologies, discovered outdated designs that were expensive etc. Last word: Large Government projects could be pretty inefficient. Well, even today it is so or it would be so but for the projects overseen by leaders like Narendra Modi and Nitin Gadkari. She had intelligently made use of her internship into a learning experience using her brain and brawn as could be seen when she was earlier in Bombay on a marketing study for Mettur Beardsell of TN. She would walk in knee-deep waters of Bombay monsoon and enter any gully to interact with a potential customer. The book “My Life in Full: Work, Family, and Our Future” by the former Chairman and CEO of PepsiCo Indra Nooyi brings out many instances in her life to show that she is no ordinary woman or ordinary executive. She was a gate-crasher and a go-getter 100% suited for the kind of job she was to  do and deliver. And deliver she did beyond the expectation of her male counterparts! The good news is that at age 22 she could own a car. Indeed the power of IIM degree or as then called Post-Graduate Diploma in Management.

Reading this, I went down the memory lane to find out what I was doing and what I possessed when I was 22 years old. I was doing my internship after taking a law degree in Bangalore at advocate Rego’s Chambers for free and riding a bicycle. Perish the thought.

I have read about the importance of ‘turning points’ in one’s life and also of luck in the famous Supreme Court Advocate Fali S. Nariman’s autobiography. He seemed a strong believer in these two elements in shaping the life and career of a person. And reading this book ‘My Life In Full’, I am revisiting a similar kind of sentiment in the life and career of Indra Nooyi that ultimately hoisted her to the pinnacle of America’s iconic business house PepsiCo as its CEO and a first and only woman to hold that office in the over-a-century-old organisation. That is Indra Nooyi’s glory. By the way our original model Indra Krishnamurthy became Indra Nooyi after she married, taking her husband’s name. Let it be.

Look at this turning point. There was a long-period of employees strike at Mettur Beardsell and with the blessings of the company’s new British Managing Director Norman Wade, she joins Johnson & Johnson Bombay. It was her third assignment in Bombay as an IIM graduate now selling packaged product for women, to handle their monthly periods, sanitary pads, stayfree etc. Like peer pressure, while in Bombay she learnt of many IITs and IIMs going to US for further studies. So she applies to Yale University and receives an acceptance letter. Later while in Madras she mentioned it to her earlier boss Norman Wade and this is what he told her, a turning point again, that she should not give up her Yale admission adding “I am disappointed you are going, but, if I was advising you as my daughter, I would say ‘Go’.” And her legendary American journey begins. Luck?

At Yale she joins the School of Organisation and Management (SOM), Yale’s first new graduate programme in fifty years in contrast to the old-school business education of Harvard and Stanford. This again a lucky choice which later enables her to get a job in PepsiCo.

After Yale, she joins a consultant firm BCG. That was in 1983. Her boss was Carl Stern, Head of BCG’s Chicago Office. She had come to Madras, with her two siblings also in US, to see her father who was in deathbed. The outlook was grim and she might have to be away from her job for a longer time. It was then, like a special grace from God, her boss Carl Stern called her to tell, “take up to six months off — with pay — to help” care for her father. What a gesture! It is also proof that BCG had held her capability in very high regard. Hence their reward. Luck.

She takes her father, a cancer patient, to America but he dies. She gets her first child Preetha and also suffers a serious car crash that hospitalised her for three months. This time too BCG stepped up what it mattered by paying her salary throughout this ordeal. Luck?

She now joins Motorola and once again finds a boss, Gerhard Schulmeyer, who is tough as nails but good to her. Luck? Here she works for eight years. In 1988, at age 33, she was promoted as Director of Strategy and Planning of Motorola! When her boss Gerhard left Motorola to join ABB he wanted her to join him. She said no, but he asked his Executive Recruiter to find him “an Indra Nooyi.” Well, a testimony to her competence and indispensable character in the work-place. However, circumstances so conspired she joins ABB working with her well-wisher boss Gerhard. A turning point?

Soon she gets her second daughter Tara. And seems close to her next job that would change her destiny for good for ever. She was asked on telephone if she would interview for the position of senior Vice-President of Corporate Strategy and Planning at PepsiCo. This company also owned KFC, Taco Bell and Pizza Hut. She accepts the job and her destiny takes her on a new journey to a new destination. Turning point? Luck?

2 COMMENTS ON THIS POST To “Indra Nooyi: A taste of Pepsi Cola —1”