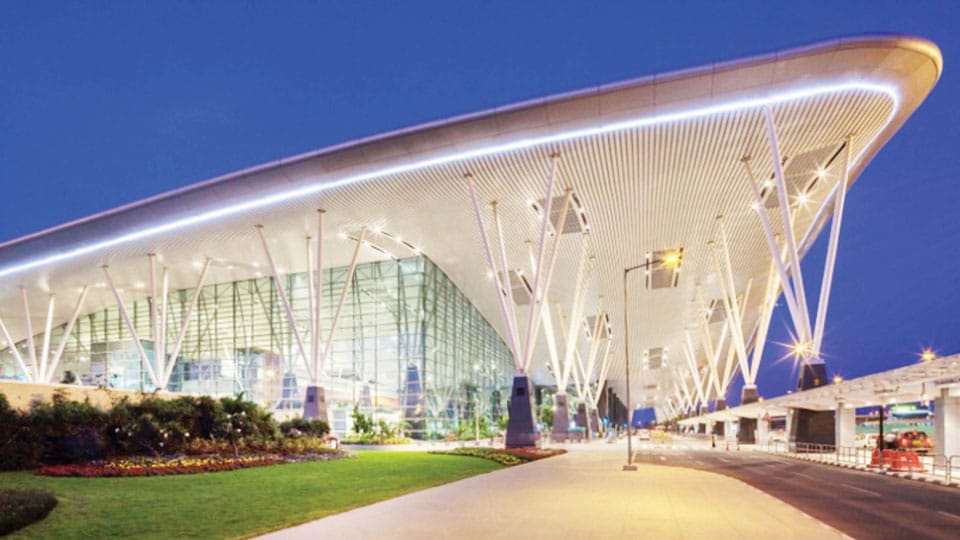 Kempegowda International Airport (KIA) at Devanahalli today is considered to be the best airport of the country and one of the best in the world. It is the pride of the State. Its expanse, its highly manicured gardens at the entrance, the overall high quality user-centric facilities provided here, the interior decor, very clean and hygienic maintenance, vast neatly demarcated parking areas, near perfect security systems among other positive factors make this international airport stand out not only within the country but even internationally.

Anyone who has visited the New York’s Kennedy airport will surely wonder whether that airport really deserves to be worthy of being the world’s busiest airport? Because the facilities there are very basic and not to the requisite international standards. Even London’s new Heathrow airport, though better than Kennedy airport, does not compare with KIA. May be Paris Charles de Gaulle airport is distantly-nearer to KIA in some sense of expected international airport standards.

Interestingly, KIA is still developing. Second and separate runway-tarmac is being built for national airline services, separating them from the international airline services. After completion of these developmental projects, KIA will surely be the world’s top airport! Therefore, one can be justly proud of our Kempegowda International Airport. However, on hindsight the location of a new International Airport at Devanahalli was the second biggest blunder that has devastated Bengaluru.

Need for a New Airport

Let us quickly recapitulate the historical events that lead to the location of KIA at Devanahalli. Very fast development of IT and BT industries in and around Bengaluru, making it world’s Silicon Valley during the last decade of last century and the beginning of this century, generated unprecedented international travel from and to Bangalore. The capacity of the existing HAL airport had reached its optimal limits, both to the service providers and to the service users.

Further, being part of defense establishment, any further scope for expansion of this airport was ruled out. HAL itself was confronting with greater demands from the Air Force activities. Therefore, the Government was compelled to think of a new place for putting up a new International Airport for Bangalore.

Committee consisting of political bigwigs, top bureaucrats and a few chiefs of very big industrial houses was formed to find a suitable place. There were discords, conflicts of opinions, threats to resign and a lot of public posturing. And finally, after a lot of back and forth, Devanahalli, located about 40 kms north of Bangalore, was selected. Was it once again a political decision? It will be known only when people involved in this decision come out openly and tell the truth. After the scrapping of NICE Economic Corridor between Mysore-Bangalore, on the hindsight it will be seen as to what a big blunder it was to have located the KIA at Devanahalli.

The entire 40-km area between Bangalore and Devanahalli was full of grape gardens, farms and more importantly, defense establishments like Air Force Command, Border Security Force and several pharmaceutical and other industrial units. The location of Devanahalli is nearing the State border with erstwhile Andhra Pradesh and present Telangana State. Whatever the justification given for the decision in favour of locating International Airport at Devanahalli, the overall cost-benefits to the State could never have been viable.

The entire green belt in this 40-km area has been totally devastated. Lack of prior transportation plan has resulted in congestions and bottlenecks. Repeated road-widening and improvements are adding to avoidable capital expenditure. Lack of Metro rail link is making the users shell out high fares in accessing the airport. Defense establishments in Air Force and BSF have been unnecessarily exposed to threats and future developmental constraints. The entire cost of development in the form of multi-lane road, flyovers, rail-link, metro and others will be narrowly beneficial to very small section of the population. And above all, Devanahalli being nearer to Telangana borders, this International airport is of greater benefit to the users of neighbouring State. For the users from our own State, this location only adds to their costs, both time-wise and money-wise!

READ ALSO  Has Mysuru gone Bengaluru way? - 4: A City on the Verge of Dying !

On the hindsight, the decision to locate KIA at Devanahalli was totally a myopic one. Let us just imagine if only this airport was located between Bidadi and Ramanagaram, or say between Ramanagaram and Maddur beside Bengaluru-Mysuru Highway! This entire belt would have exploded with the economic prosperity. The entire costs of additional infrastructural development would have relieved Bengaluru of pressure on residential demands and traffic congestions. It would have benefited the nearby towns and cities. And time-wise and cost-wise, Mysureans would have been highly benefited, as the distance would have been around 70-80 kms !

Conversely, suppose this airport were to have been located on Bengaluru-Mangaluru Highway somewhere between Bengaluru and Channarayapatna. Then it would have benefited three important cities of the State — Bengaluru, Hassan and Mysuru ! And the entire area all along this route would have been  economically developed ! Above all, the defense establishments and green belt of Bengaluru-Devanahalli would have been protected, benefiting Bengaluru’s climate !

Huge capital expenditures being incurred on providing flyovers, Metro rail and others only to facilitate the access to the KIA is benefiting a very small segment of the Bengaluru’s geographical area and population. And that too by building up greater pressure on the overall infrastructural services within the metropolitan city of Bengaluru. Location of KIA at Devanahalli was a big blunder for which the  State will continue to pay a very heavy price all time to come.

Well, one can only ponder over this split milk! But above two blunders have imposed huge costs on Bengaluru and have catapulted the city from once a City with European Touch to what it has become today — a Failed City !

29 COMMENTS ON THIS POST To “Has Mysuru gone Bengaluru way? – 3: KIA Location: A Myopic Decision”