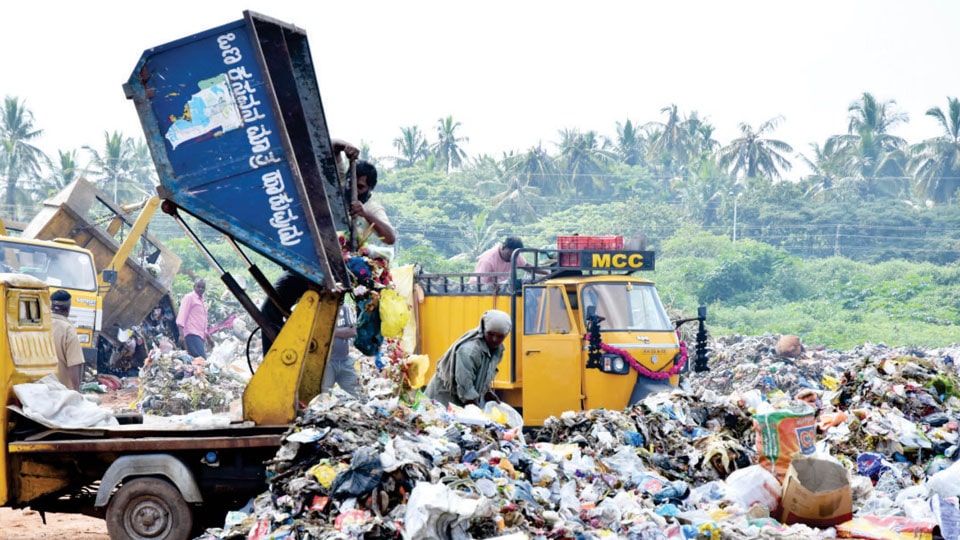 In Swachh Survekshan 2020 Indore has been declared as India’s Cleanest City for the fourth consecutive time. Mysuru is now ranked cleanest among the middle category population (3 to 10 lakh) cities.

It is matter of great concern for Mysuru. A city which was ranked first among all the big cities is now considered under a lower category of cities. With a long history of efficient municipal management and huge investments made under JnNURM and several other Central and State civic projects, the city is gradually losing its position among the top cleanest cities. The main reason for this degradation could be a lack of a true comprehensive Solid Waste Management (SWM) plan.

Mysuru City Corporation (MCC) plans for managing the problem of solid waste generated within its municipal boundaries. And as per the SWM rules  it is justified in doing so. However, city of Mysuru exists beyond the municipal boundaries. Mysuru Urban Development Authority (MUDA) develops residential layouts and for several decades such layouts remain within the administration of MUDA.

These layouts are not part of the municipal wards. Is the solid waste generated by these MUDA layouts, taken into account by the MCC’s assessment of total SWM? Since in future these MUDA layouts will be handed over to MCC, are they counted for the long-term SWM Plan?

And finally, the city’s boundaries are skewed in such a way that the areas within the administrative jurisdiction of Srirangapatna Mandya district are included. A large number of residential layouts have been developed on these twilight boundaries. These residents might find it convenient to arrange for dumping of their solid wastes into the Mysuru city areas as it would be most convenient way of disposal! Are these producers of waste part of city’s SWM plan?

The recent hullaballoo was about the stench emanating from the mountains of treated/ untreated solid wastes in Vidyaranyapuram Sewage Farm and inefficient functioning of the Excel plant. Several first-aid type of solutions like spraying of chemicals etc. have failed miserably.

Non functional zero-waste units established around the city have only added to the load on Sewage Farm. It is in this context that Rayanakere project has become central issue of discussion. As per the project proposal, this new project will only further enhance the stench from Sewage Farm.

In February, 2018 SMS Envocare Limited, Pune, submitted a report on SWM project to be located at Rayanakere on H.D. Kote Road. State-level Environment Assessment Authority had initiated this project proposal in August, 2016 under Swachh Bharat Mission. Original Terms of Reference was for processing 100 tonnes per day of waste and the total cost was Rs.13.96 crore.

1. Original Terms of Reference 18 stated “Submit the details of sanitary landfill site impermeability and whether it would be lined, if so details thereof.” As compliance to this, the report stated “Not applicable as sanitary landfill is not required. Proposed project will only waste processing facility. Inert waste will be sent to existing landfill of Vidyaranyapuram.”

The report reiterates this point at several other places as well in the schematic design of the process of SWM. Therefore, the woes of Vidyaranyapuram dump are going to increase and will not decrease even if Rayanakere project comes up.

3. As per Original Terms of Reference, “Location of the project area should not be within 500 meters of a State Highway or a National Highway.” However, the project is said to be only 600 meters North West of State Highway 33 — the Manandavadi Road.

4. As per Original Terms of Reference, an NOC must be obtained from local or nearest airport within 20 kms and any flight funnel restrictions. But Mysore Airport is 3.0 km away from the site. This is certainly going to cause huge problem in future as there is every chance of big birds gathering around in very large numbers. Though the claimed distance is only 3 kms, aerial distance might be still less. And as the Airport is planning an expansion for facilitating landing of big planes, this location is sure to cause problems.

The main limitation could be that it was only 0.59 km away from Kesare village. Even though it fulfilled the minimum 0.50 km Original Terms of Reference limit, it might cause problem when the village expands in future.

1. From the information available, we see that in 2018, project reports were submitted for two SWM plants — 150 tonnes per day at Rayanakere and 200 tonnes per day at Kesare. There is a mention in these reports that MCC plans to upgrade the SWM facility at Vidyaranyapuram. However, the details of this are not available. Will such upgradation address the woes of residents of Vidyaranyapuram?

2. As the Rayanakere Plant plans to shift its inorganic wastes to the landfill facility at Vidyaranyapuram, which is in itself the crux of the problem at present, there is apprehension that situation may worsen for the residents around sewage farm in the future.

3. There is lack of coordination between MUDA, KIADB and the MCC with regard to SWM plans. The reports on Rayanakere and Kesare have stated that based on the population growth projections, there will be around 756 tonnes per day waste by 2022. But do these projections include all the three areas in question?

5. Recent public debate was for tendering the present and future SWM to a firm with responsibility of disposing of legacy waste in huge dumps in the Vidyaranyapuram SWM unit. Where will they be dumped? Are the residents of villages around such dumping areas taken into confidence?

2 COMMENTS ON THIS POST To “Is a true comprehensive Solid Waste Management plan missing?”