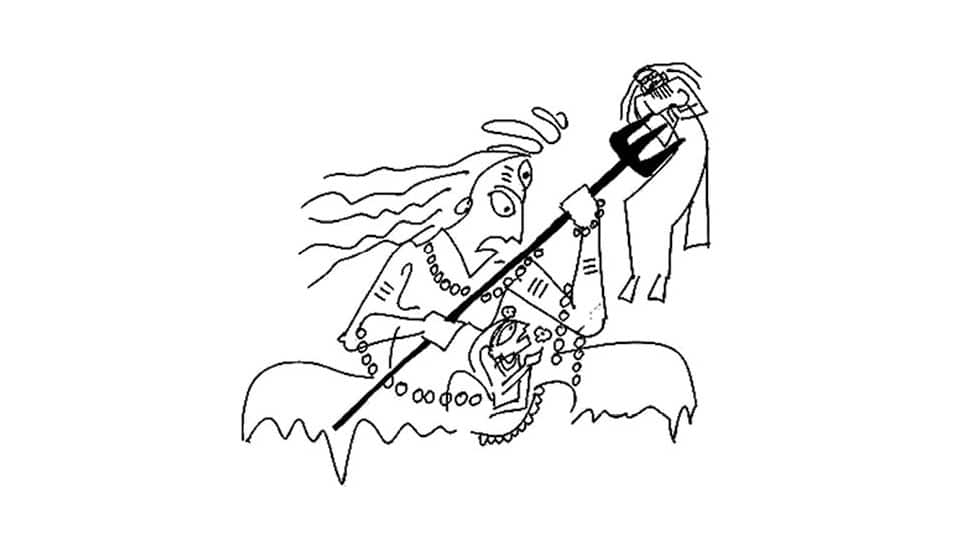 When Shiva used His Trident

Some of the oldest and most spectacular images of Shiva are found in Elephanta and Ellora, cave temples built by Chalukyas and Rashtrakutas roughly 1,500 years ago, when a new form of Hinduism, based on Puranas and Hindu trinity began overshadowing the old Vedic and Buddhist ways. Amongst these Shiva images, are one of him impaling an asura with his trident. It is one of the rare occasions where Shiva uses his trident in a battle against an asura. This asura is called Andhaka or the asura of darkness. He is also considered a ‘son’ of Shiva.

It is said that once, in a spirit of play, Parvati covered Shiva’s eyes with her palms. This plunged the whole world into darkness, forcing Shiva to open his third eye, so that the Sun’s light could be restored. With Shiva’s third eye blazing, Parvati’s palms began to sweat. From that sweat, emerged a child. Since the child was born in darkness, he came to be known as Andhaka. He was adopted and raised by the Asuras.

Like all Asuras, Andhaka did tapasya and called upon Brahma to get power. He wanted this power to defeat the Devas. Like all Asuras, he sought immortality. But he was told he shall never achieve this, he settled for a boon that he would only die if he coveted his own mother. But there was a problem. He did not realise he was adopted. That he was son of Shiva-Shakti and not his Asura foster parents. Brahma granted this boon.

Armed with his boon that made him invincible to all weapons, Andhaka raised a great army and defeated the Devas in Swarga and conquered the three worlds. He created havoc everywhere. He reaches Kailasa, determined to become Master of Kailasa too.

But then he sees Parvati, and is consumed with desire for her. To protect Parvati, Vishnu takes her form, multiplying a thousand-fold to confuse Andhaka. Finally, Shiva challenges Andhaka to battle. In the battle, Shiva plunges his trident into Andhaka. Andhaka has the power to replicate himself from each drop of his blood. Hence, Shiva raises him on his trident and begins to bleed him dry. Every drop of Andhaka’s blood, which falls on the ground, is consumed by Parvati who takes the form of Kali, and her companions, the yoginis. In a way, Andhaka is squeezed off every drop of his blood.

In Tantric scriptures, it is said that a child gets its blood from its mother and bones from its father. Since he coveted his own mother sexually, Andhaka loses all that his mother gave him: his blood. And, he becomes a shrivelled skeletal creature. Andhaka apologises to Shiva. He starts singing praises of Shiva from atop the trident. Shiva feels sorry for him. So, Shiva transforms him into a sage called Bhringi. Bhringi is visualised as a skeleton, without flesh and blood, one who finally realised that Shiva-Shakti are one.

Andhaka’s story is about desire and being blinded by desire, for he is born of desire, in darkness. The images in Elephanta and Ellora are dramatic and fierce, and simultaneously full of grace. It is a rare image, as Shiva is more popularly shown either meditating or in the company of his wife. He transforms into Bhairava or Virabhadra to express violence. Rarely, he does so as Shiva.