Home » Feature Articles » Has Mysuru gone Bengaluru way? – 4: A City on the Verge of Dying ! 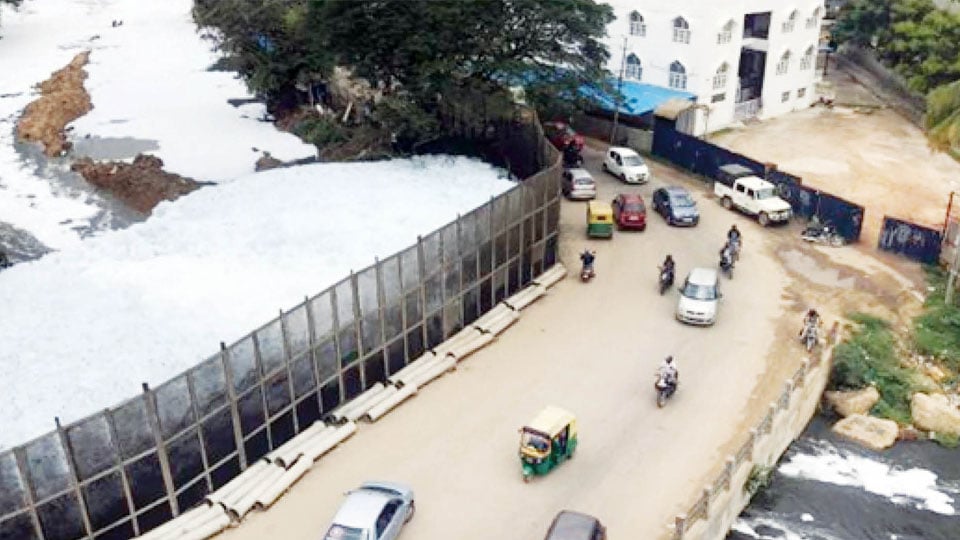 Has Mysuru gone Bengaluru way? – 4: A City on the Verge of Dying !

On Feb. 10, 2017, Kathyayini Chamaraj, the Executive Trustee of CIVIC (Citizens Voluntary Initiative for the City) activities of Citizens Matters [an organisation supported by Oorvani Foundation, a non-profit Trust], had written a very detailed letter  to the Chief Minister of Karnataka under the heading, ‘Why Bengaluru’s Planning Process is Against the Spirit of Our Constitution.’ Following quote is only the first part of that letter:

Bengaluru city has reached a population of 1 crore already. It is finding it difficult to provide drinking water to half its residents. The city has 60 lakh vehicles (a vehicle for every two persons), congesting roads and making it impossible for buses to ply and for pedestrians, street vendors and cyclists to have an equitable amount of road-space.

Garbage mismanagement in the city has necessitated the intervention of the Karnataka High Court to ensure that MoEF Rules are followed and mafias controlled. Lakes continue to froth and get encroached, even by the BDA and Public Interest Litigations are required to seek High Court directions to protect them.

Ground water has become polluted and is getting depleted. The slightest rains flood Bengaluru due to encroachment of Raja Kaluves. Air is polluted due to vehicle emissions giving rise to respiratory diseases.  Children have no place to play at all. More than half the green cover has been lost in the past decade alone.

Public Interest Litigations (PILs) have to be constantly filed to ensure that laws and rules regarding the setting up of the MPC and Ward Committees are followed.  It is obvious that the city is in a super-crisis and is on the verge of dying.

Above quote very neatly sums up the total deterioration of urban infrastructure and total breakdown of rule of law in Bengaluru. However, during the past four-plus years, things have so rapidly deteriorated that by December 2021, an Editorial [quoted in part -1] has declared Bengaluru as a Failed City! Let us very briefly scan through a few facts.

The population of Bengaluru as per Census 2011 was 8.4 million, whereas it is estimated to be 12 million (1.2 crore) in 2020, nearly 50 percent increase within a period of 9 years! In 2015 historians are quoted as having said that there were three waves of migrations to the city and as per 2011 Census, the migrants constituted 40 percent of Bengaluru’s populations. In 2019, there were close to 67,000 registered IT Companies in Bengaluru, out of which 12,000 companies worked full time. As of 2017, IT firms in Bengaluru employed 1.5 million employees in IT and IT-enabled services sector, out of nearly 4.36 million employees across India. And accounted for the highest IT-related exports in the country. No surprise that Bengaluru is called the second Silicon Valley!

Post independence mainly two organisations were involved in the development and civic administration of Bengaluru, namely the Bengaluru Development Authority [BDA] and the Bruhut Bengaluru Mahanagara Palike [BBMP]. As Bengaluru is the State’s capital, the State Government has also been involving itself with the affairs of this city in more than one way. Let us very briefly peruse roles of these organisations.

Even after the City Improvement Trust Board [CITB] morphed into Bangalore Development Authority [BDA], the city’s  planned development was in operation  from Jayanagar and its various phases, or even until the Dollar’s Colony. However, once the city was hit by the boom, urban planning went haywire. It gave way to massive land scams, corruption and all round chaos. BDA became a Broken Down Authority. It had to simply adopt the decrepit infrastructure ‘developed’ by the City or Town Municipal Councils as and when concerned geographical areas were handed over to it. And there was very little that BDA could do in the form of improvements or modifications with highly ill-developed and legally challenging infrastructural mess.

The municipal administration of Bengaluru under BBMP has undergone even worse predicament than the BDA. The growth of properties outpaced the capacity of BBMP to maintain records, resulting in huge shortage of revenues. In an affidavit submitted by the Government before the High Court based on a random sample survey in 4 of the 198 Ward of BBMP, it was estimated that of the 16.75 lakh sites in Bengaluru, the BBMP had been able to collect tax for 13.83 lakh sites and remaining 2.93 lakh sites (17.49%) were estimated to be unauthorised. The Government’s survey data found that of the residential properties with violations, 47.5% have violations above 50%. In case of non-residential buildings with violations, the survey found that 81.75% buildings have more than 25%, that is only 18.25% buildings have violations below that limit!

To overcome the revenue shortage, BBMP has resorted to sanctioning a semi-legal status to the properties in the nature of  Form B  registrations. However, this backdoor approval of illegality has put  the owners of such properties in a lurch.

Drinking water is short supply and majority of the multi-storied buildings are ferrying water from ‘somewhere’, and the residents are forced to buy bottled drinking water. Water supply and bottled-drinking water  are multi-billion racket in Bengaluru.

As per the data available for 2016-17, Bengaluru with more than 70,000 vehicles was home to second highest number of vehicles in India, second to Delhi’s 1.01 crore vehicles. This was indicative of doubling of the vehicle numbers within 10 years in Bengaluru. Delays in the planning and the construction of flyovers, metro-rail and  lack of proper road maintenance have made life of motorists a hell.

Waste management in Bengaluru is a monumental failure. Even though organised under PPP model, it seems to be totally under the control of  mafia. Today solid waste management and  landfills are  huge issues in Bengaluru. Villages where such wastes were being dumped have revolted against BBMP. Due to the sky high land values and the real estate importance, BBMP has become a magnet for politically ambitious, newly minted rich in and around the city.  And it has badly affected the functioning of BBMP, making it most inefficient and corrupt organisation.

Being the State capital, everything in Bengaluru has been happening directly under the Government’s scanner. Its handling of affairs in BDA and BBMP, to say the least, is totally ham-handed. State Government’s attempts to bring in Akrama-Sakrama exposed its condonation of the BBMP’s failure to enforce the  property rules in the past. Foot-in-the-door by the judiciary has put a stop to this stealth effort. It will not be wrong to put the entire blame for the total collapse of city’s development and administration at the doorsteps of the State Government.

Past failed attempts to revive Bengaluru

Attempts have been made in the past to revive Bengaluru. For example, the Bangalore Agenda Task Force [BATF], consisting of top-notch industrial leaders, NGO heads, Babus with known credibility being its members. BATF did dig into the root of the malice and suggest certain remedial measures. But due to the changes in the political leadership the Task Force was given a quiet burial. Thereafter, several proposals have been in the air, such as splitting gargantuan BBMP into more than two organisations. But the political power in BBMP would not let the Government do it ! Policing is yet another area of political interference at every stage. Result is missing or weak policing, high crime rate and mafia rule.

Among several other factors, lack of timely remedial measures in the case of Hosur, politically motivated cancellation of NICE corridor project and myopic decision while locating KIA have cost Bengaluru very heavily. They have resulted in making Bengaluru a Failed City. And this is “Bengaluru Way”! A costly lesson in our urban development.

Let us see whether Mysuru has ‘already’ gone Bengaluru way?

Has Mysuru gone Bengaluru way R. Chandra Prakash
Bad road saves a child?!
What it takes to be a leader? —2

2 COMMENTS ON THIS POST To “Has Mysuru gone Bengaluru way? – 4: A City on the Verge of Dying !”