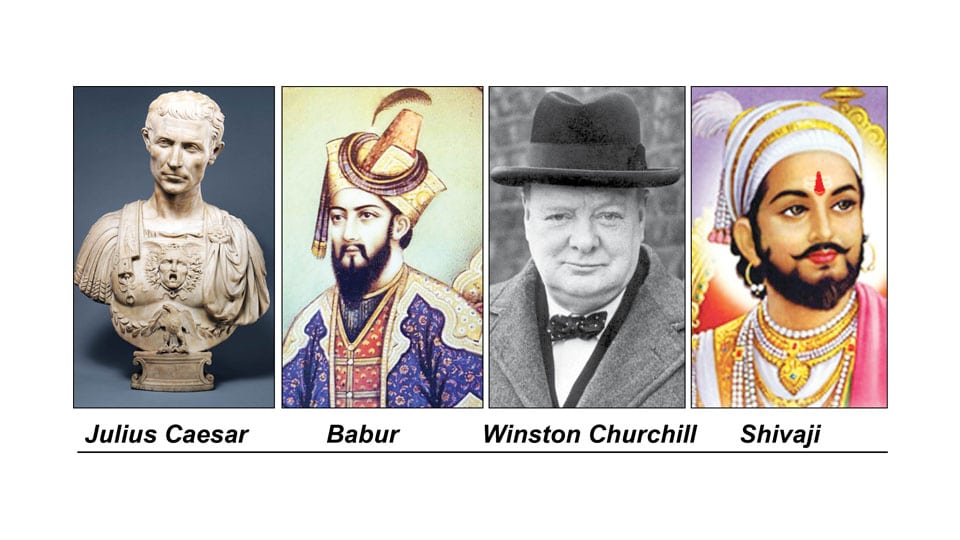 History says, Julius Caesar, the Roman General, was giving a chase to his rival Pompey who had escaped to Egypt. Caesar and his men were in the ship. In the high seas, they were overtaken by a storm and the ship was in danger. There was commotion and plea for help from Caesar from the soldiers.

Caesar, however, was cool and calm. He told his men gripped in fear: “Do not fear. Don’t you know the ship is carrying Caesar and his destiny?”

Soon the storm passed and the ship harboured safely on the Egyptian shore. Confidence? Leadership quality?

Babur, the first Mughal Emperor, after conquering Kabul (Afghanistan) in 1507 was bent on subduing Hindustan under the rule of Sultans. But the perils and dangers were too many. He gathered an army of 10,000 horsemen to invade India.

Between Kabul and India lay ranges of high mountains where war-like tribals lived. They were subdued. He was aware that before his invasion, India had been three times overrun and conquered from Afghanistan. “But Babur was brave and such traits of character as the following had made him an adored leader.”

What are those traits?

Once he was returning from Herat to his capital Kabul leading his troops across those ranges of mountains. It was night. The way was lost among the mountains. A heavy snowstorm set in.

Babur ordered his men to dismount (from their horses) and halt where he happened to be. Many men waited for morning on horseback. Some desired Babur to go into a cave. But Babur would not go. Babur felt that to be in a warm dwelling while his men were in the midst of snow and drift, would be inconsistent with what he owed them. It would be a deviation from that companionship in suffering that was their due. Babur felt he should be a sharer of this suffering and difficulties with them.

Babur writes in his memoir about a Persian proverb, “Death in the company of friends is a feast.” By morning, four inches of snow had “settled” on Babur’s head, lips and ears. What do you call this?

Leadership. No wonder he defeated the Delhi Sultan and founded the Mughul Empire.

Babur asked his Military Commander if there were any Sultans or Hindu kings to fight a war with to expand the empire. He was told there was Vijayanagar Empire to the South but not advisable to wage a war against such a powerful kingdom. Babur wisely focuses only on the North and East. Again leadership trait. It was like Field Marshal Manekshaw’s advice to Indira Gandhi not to  attack East Pakistan at a wrong time. Fortunately, Indira Gandhi took the advice and India won. Let it be.

Let me recall an episode attributed to Winston Churchill, Britain’s inspirational, loved and deeply respected (even feared), cigar-smoking Prime Minister during World War II. Leadership quality was in his blood. His father was John Churchill, 1st Duke of Marlborough, who helped King James II in 1685 crush a rebellion by the Duke of Monmouth. To deviate, I had visited Churchill’s Marlborough Palace near London, seen Winston Churchill’s bedroom and even the room where he was delivered by his mother.

Indeed born great, born a leader, who in his early military service, was stationed in Bengaluru cantonment. As students, my friends and I used to stroll around Shoolay Police Station (then), the end of Brigade Road. There used to be some leading pawn brokers’ shops, of over 100 years old. We were told that from one of the pawn brokers’ (who were also money-lenders), Winston Churchill had borrowed money, a small amount in the present-value, on a Promissory Note which that pawn brokers’ successors kept as a valuable memento. It made news! Let it be.

READ ALSO  Theatre of the Absurd, Karnataka: Arabian Nights of a Sort!

Once, after Churchill had retired from politics, the head-student of his alma mater school made bold to approach him and requested him to deliver the school day speech. Churchill refused making age an excuse. But on a lateral thought agreed. On the appointed day, Churchill went to school with his brand of top-hat and a walking stick. He was conducted to the stage where he removed the top-hat and gave it to the head-student along with the walking stick and stood there in front of the students.

Probably this was the shortest speech he ever made. But then it could come only from a natural leader, born leader.

Having written a book titled ‘Sword of Shivaji’ last year, how could I not include Chhatrapati Shivaji, Founder of the Maratha Empire and the nemises of the Mughal Emperor Aurangzeb, as among the great leaders of the world?

From the age of nine, as with Alexander the Great, Shivaji exhibited all the qualities of a leader. Well, he had one more attribute, apart from concern, confidence and courage, that is cunning. For more on Shivaji read my book!! If you need the book contact Mob: 98452-96447.

May our country be blessed with true, authentic leaders like I mentioned above for the good of ‘We the People of India’.