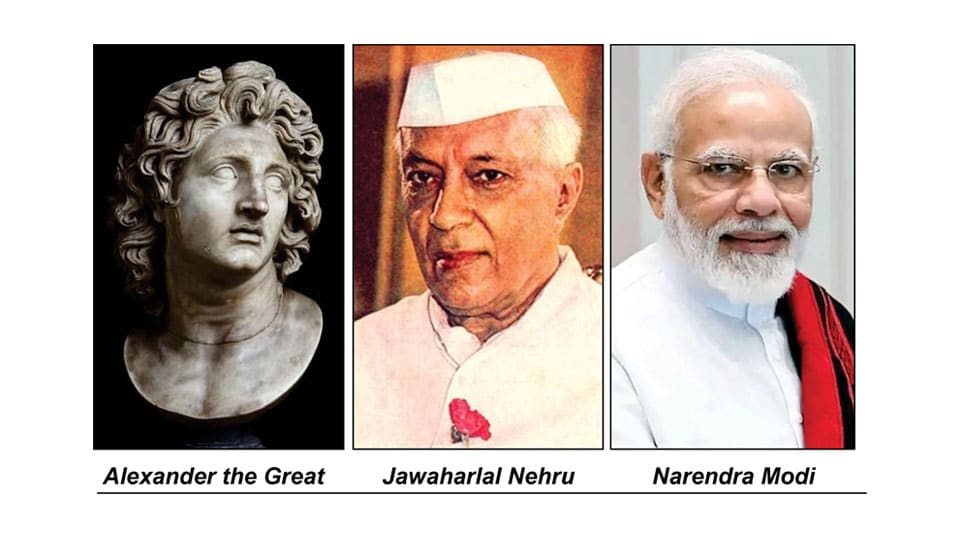 We often hear the refrain ‘leadership crisis.’ When Pandit Jawaharlal Nehru was the Prime Minister and Vallabhbhai Patel was not there, we heard political pundits asking, ‘After Nehru who?’ A foreign journalist and author Welles Hangen had even written a book with that title in 1963, a year before Nehru died. Why this anxiety? Was India fearing a ‘leadership crisis’ after Nehru?

It almost seemed so when Nehru died. Mercifully, India found a leader to succeed Nehru, after a stop-gap Prime Minister Gulzarilal Nanda, in Lal Bahadur Shastri. Many political pundits and the Congress party members had their own fears about the choice of their Leader. Of course, soon their fears were belied… that is another story.

It is said about greatness of a person in the following manner: Some are born great, some achieve greatness and greatness is thrust upon some. Same can be said of leadership too.

Leadership is always political and military. A Monarch, President or Prime Minister or a General. But greatness is what one achieves in a given field  of activity — science, art, industry or literature.

In history, we find some born leaders. But there are some born to a dynasty masquerading as leaders. However, without leadership qualities, they are sooner or later dislodged and cast in the dustbins of history, no matter they are kings or political activists. There are also people who become leaders because of their concern, confidence and courage. Concern to the people and the followers. Confidence to lead the people in times of peace and war. And courage to accept challenges and fight.

I am of the opinion that leadership can be thrust upon anyone, a blighter or from a dynasty. But if it is done, this leader will soon be deserted by the people and forgotten. We have seen this happen in the world history, whether from monarchies or from among the contenders for leadership in democracies. Our own democracy has seen this happen over the last 75 years of its existence. Which is why we have had Prime Ministers whose life in office was too short like the ephemeral insects that are born in the morning and gone by evening. People generally mock at this category of leaders. They are not taken seriously. Stop-gap leaders!

A true leader, history tells us, is one who is feared, hated or loved. Such leaders are always obeyed and respected. Because, they lead from the front. They infuse confidence among their men, soldiers and officers. Nobody likes a weak leader nor those who do not inspire the people to march to defend the country or conquer another or to work for the development of the country.  Nehru and now Modi are indeed inspirational leaders.

Be that as it may, let me give some examples from history where individuals became great leaders because of certain leadership qualities in them.

Leadership is a special quality. One cannot learn it in a school or college. It is innate, one is born with it. They inspire people to do extraordinary things. Which is why we find people of humble origins, like our Prime Minister Narendra Modi, who rise above their colleagues to lead an army, party or country.

Let me illustrate these musings on leadership with a few examples. Take Alexander the Great. He was born to the fourth wife of the Macedonian King Philip II. He was born on 20th July, 356 BC. The great Greek Philosopher Aristotle was his tutor.

An early example of Alexander’s courage concerns his famous and favourite horse by name Bucephalus. It was a beautiful thoroughbred. It was brought to the court to be sold to King Philip, but was so wild that no one could ride him. Alexander was ten years old then. But looking at the horse, realised very quickly that the horse was frightened by its     own shadow.

Alexander approached the horse Bucephalus, turned him so that he was facing the sun. Naturally, his shadow fell behind him. Alexander, then, calmly climbed on to his back. Common-sense and courage. A born leader?

Alexander’s father Philip, King of Macedonia, ruled the City-States of Greece as the leader of The League of Corinth. When he died, the Greeks rebelled but Alexander, just age of nineteen, went into action at once and put down the rebellion and assumed the throne. Leadership? Remember Kashmir in 1948 and 1972? We were winning but…

Another example of Alexander’s leadership quality: He marches into the ancient capital of Phrygian Gordium. Legend says that whoever untied the knot, known as ‘Gordian Knot,’ would become the king of Asia. Alexander, the pragmatist, like all before him, could not untie the Knot. But being one never to give up, he simply took his sword and sliced it in half. Considered a problem solving technique, it is known as the Alexanderian solution!

READ ALSO  Should Rahul be his Father’s Son ?

In 331 BC, Alexander arrived in Egypt and landed on its shores in hot summer to find a hostile desert. His soldiers were tired and thirsty. But where and how to find potable water in that wilderness?

He sent out his soldiers to find a water hole and fetch water. One soldier returned and gave Alexander the water, filled in his helmet, beseeching him to drink.

Alexander received the helmet of water, held it high above in front of his soldiers waiting on the desert sand under a merciless hot sun. Then saying, ‘How can I have this water when you are thirsty,’ Alexander splashed the water in the helmet on the desert sand. And there was a thunderous cheering in praise of Alexander.  A great leader?

Alexander was fed with the myth that in India there were saints who knew the secret of becoming immortal and he wanted to be immortal. He found a saint who was urged to reveal him the secret of becoming immortal. The saint reluctantly obliged.  Alexander departed to find the lake with elixir of life which when consumed, one would become immortal. He finds the lake, takes water in his cupped-palms and was about to drink when an aerial voice cautions him not to drink as his life would be miserable if he survived all his people and left alone as an old immortal. He lets the water drain down between his fingers and returns. A good listener. A true leader?

It is said that he who lives by the sword dies by the sword. Hermann Hesse mentions this in his book Siddhartha. Alexander lived by the sword as history records. But he did not die by the sword. He died by a common fever at the young age of 32. His instruction for his funeral was eloquent about his wisdom, learnt from his life’s journey so far. He told his undertakers, ‘make two holes on either side of the coffin to keep my hands visible outside for people to see and keep my palms open. This will convey the message that howsoever a great leader you are, when you leave this world, you leave empty handed, with nothing. A great leader? A wise leader?