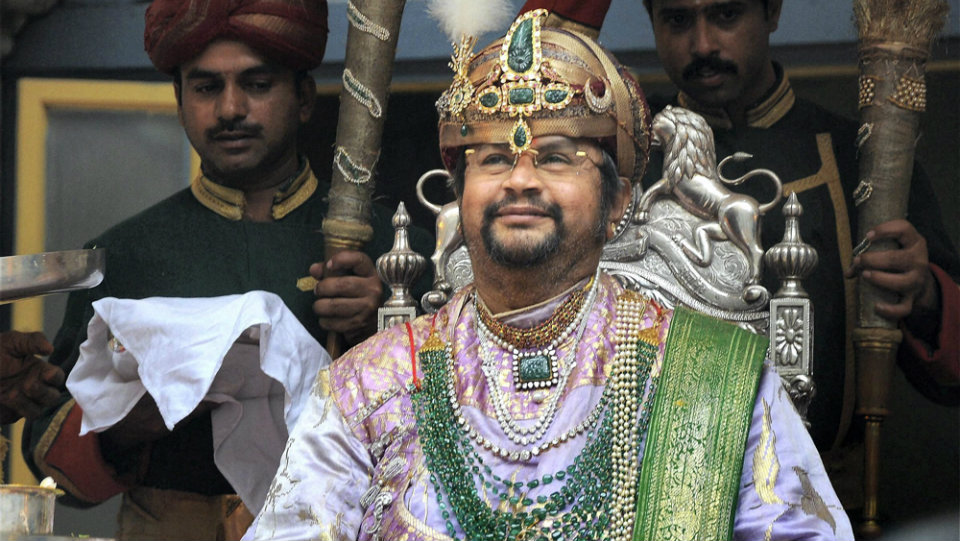 In the year 1975 I came here from Poona on a week’s leave to participate in the formal inauguration of Academy Press in Saraswathipuram, near Kamakshi Hospital. The building was rented from my brother Dr. K.B. Subbaiah for a pittance (blood is thicker than water!). The arrangements were made by my working partner C.P. Chinnappa and the chief guest to inaugurate was fixed by my brother Dr. K.B. Subbaiah. Who was it? Well, none other than the former Mysore Kingdom’s Royalty, the Scion of the Mysore Royal family Mr. Srikantadatta Narasimharaja Wadiyar. I was delighted. A Prince blessing our Printing Press!

A shamiyana was erected, chairs for about 100 invitees were arranged and invitees started arriving.

Almost all of them were friends and acquaintances of my brother Dr. Subbaiah. After all, both Chinnappa and I were new to Mysore. As time passed, the inaugural time arrived but no trace of the chief guest Mr. Wadiyar. Those days telephone contacts were difficult to make. Call to Palace drew a blank. My poor brother was looking anxious. Even embarrassed. Mr. Farrokh K. Irani, MD of Ideal Jawa Motorcycle factory, was with my brother and advised waiting…. Guests were feeling restless. Some of our friends were seen whispering about the bad omen and such stuff.

In the middle of 1977, I shifted to Mysore to join the Press as a working partner and started Star of Mysore evening English newspaper, on 16th February 1978 without any inaugural function. The reason was that we did not want to face a possible embarrassing situation as we suffered at the time of inaugurating the Press two years back. To justify such a decision and to tell our readers the philosophy and the purpose of the newspaper, I wrote an Editorial, short one, instead. Let me reproduce it here, as a reminder to our readers:

A Star is Born

In an age where birth of a nation is a minor event, birth of a child is a curse, the birth of a newspaper is bound to be a non-event. More so when its founders and the Editor are from among the common men with no past of any distinction. Which is why there was no ceremonial inauguration of the publication of Star of Mysore nor any promotional campaign.

It is natural, our readers may want to know what manner of a newspaper this Star of Mysore will be. A run-of-the-mill type that flutters and falls gently, like an unwanted old leaf, through the window into your drawing room every evening or the one that will interest you to welcome home and read with pleasure.

Yes, the Star of Mysore is conceived and produced to belong to the latter category.

This is a local paper and as such we are more interested in what is happening in our immediate surroundings rather than in the distant Delhi everyday.

Our investigative reporter will sneak into the Municipal Council Hall, go nosing around University campus, walk footloose along the Police beat, amble into the hospitals and slink under the seat of power to publish in cold print all that you always wanted to know but could not. Now a STAR is born to fulfil that need.

We, the publishers, reporters and the Editor are aware of our responsibility to our readers. And it is our hope that we will be able to find a responsive readership in you. We are also aware that in the final analysis, it is your patronage and support (both from the readers and the advertisers) that will sustain us in our noble goals and work-a-day life.

The best cannot come in the beginning. We have many constraints. We are improving now and will improve as days pass by. You will soon find better headline types, brighter layout and excellent printing. We are trying. The Star must shine.

Our patrons and subscribers may be seeing this first editorial every year in our Special Anniversary Issue.

On 16th February 1979, however, we decided to hold the first anniversary of SOM in the Town Hall, more to promote the paper than as a celebration. By then our circulation had touched 2,000 copies — in just 12 months! I do not know why and how. This time too Prince was to preside over the function. Town Hall was full to the last seat and overflowing to the side-verandas. No trace of the Prince and this time it was Mr. Anagol, the Divisional Commissioner, who saved the situation for me and the function. The main attraction of the function was the Kathak dance performance by the son of Premier Studio owner Mr. Basavarajaiah, Mr. B. Nagaraj and his troupe. It was a grand function and helped SOM in increasing the circulation and also advertising for those days.

In future years, young Mr. Srikantadatta Narasimharaja Wadiyar rose in stature and became a Member of Parliament, Lok Sabha, by winning the election as a Congress candidate. He was an MP for four terms. He was an interesting person, quite knowledgeable on many subjects and a good conversationalist once engaged. Very religious, carried himself in a regal manner in public places and a great host befitting Royalty.

Around 1982-83 I had gone to the Palace with my friend one Ram Prasad, who knew the Prince, for an interview relating to the controversy about the ownership of the cinema theatre ‘Shyamsunder’, near the Zoo. It was a very frank and a long interview of nearly two hours over two cups of coffee served in silverware and my notes running over 100 pages of reporter’s pad! He was very gentle, soft spoken and a very young man in his late 20s.

When the interview was over, I was delighted, as the Editor of Star of Mysore, thinking I had a scoop. Alas! But it was not to be. As I got up from my seat to leave, thanking him profusely, he said, “Please don’t publish until I tell you.” He did not tell me. I did not publish.

Before I forget, my two sons and I will always gratefully remember him for the support he gave us when my sons contested for the Mysore Race Club (MRC) membership elections.

Every year during Dasara he would conduct 9-10 days of religious rituals in the Palace as per the Palace tradition and also hold his Private Darbar on lines of the period in the past when his dynasty ruled the Mysore Kingdom. On such occasions seeing him seated on the Golden Throne, dressed in the Royal Regalia, was a sight to be seen. It was a testimony to the great reverence and pride he had for his Royal lineage and his Yadu Dynasty of Wadiyars who ruled Mysore Kingdom for over 500 years (1339 to 1950) with 38 years of interregnum when Hyder Ali and his son Tipu Sultan ruled.