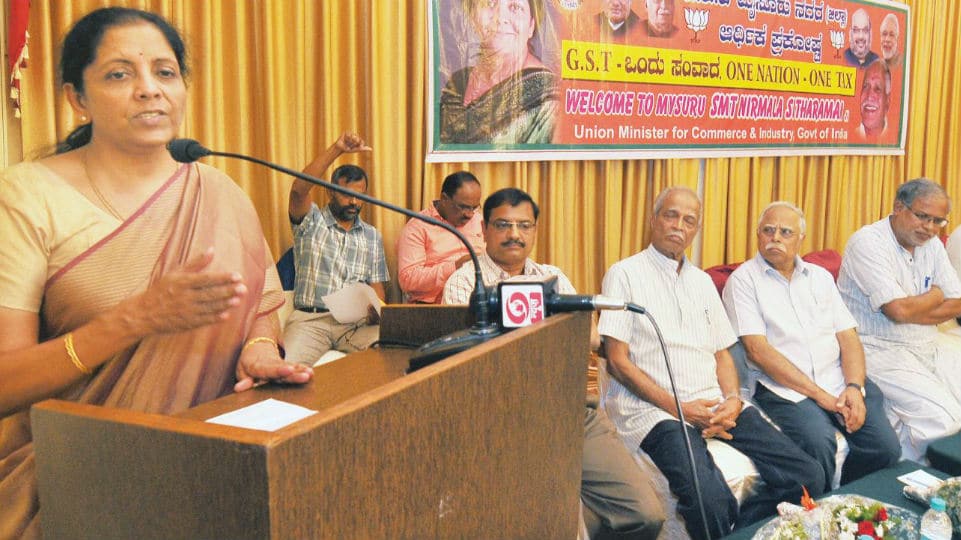 Mysuru: Even as the tax chaos continues with so much of pre-GST uncertainty, the erudite Union Minister of State for Commerce and Industry Nirmala Sitharaman said the introduction of One Nation, One Market, One Tax, was a miraculous achievement.

Participating in the GST — One Nation, One Tax, interaction with the industry and trade bodies of Mysuru, organised by the BJP District Unit, at Hotel Pai Vista here last evening, Sitharaman said if on the midnight of August 14-15, 1947, India awoke to political freedom, it was the economic freedom that marked the midnight of June 30-July 1, 2017 event at the Central Hall of the Parliament.

Trying to allay the fears of the hall packed with businessmen, traders, CAs, builders, she began, “Doubts about implementation of GST, its impact, what is happening, can the rates be changed would be cleared and if there are anomalies in the system, it will also be taken up by the GST Council. However, as far as the issues of rate of taxation is concerned, it is more or less settled,” and added “if there are queries then the GST Commissioner will explain and I will pitch in.”

Taking pains to explain about GST and how it was formulated, Sitharaman said, “It is not the decision of just one party or the PM or the FM. It is Finance Ministers of all 29 States, 7 Union Territories and the Union Finance Minister who sat in 18 GST Council meetings before June 30-July 1, who have drafted the GST. They met on Saturdays and in day-long marathon meetings, chaired by the Opposition party’s Finance Ministers, that would begin at 10 am, discuss chapter by chapter.”

She explained that there are five rate slabs of 0, 5, 12, 18 and 28 per cent and all that has been done is, after the weighted average, the taxes that were there earlier had been moved to the nearest tax slab. Hence, there is principle revenue neutrality as there is no reason for the State to lose or earn more.

Talking about the sanitary napkins issue that has raised the hackles of the women in the country, Sitharaman said, “How can they put tax on sanitary napkins? This is one example of revenue neutrality. There is no new tax imposed on sanitary napkins. The taxes had been imposed on it but it was not visible,” and added, “earlier there was 17 taxes and 23 cesses and the cascading effect of taxes has been insulated.”

She said the GST Network (GSTN) is a non-profit, non-government organisation. It will manage the entire IT system of the GST portal, which is the mother database for everything GST. This portal will be used by the government to track every financial transaction, and will provide taxpayers with all services — from registration to filing taxes and maintaining all tax details — she said adding GSTN was doing over Rs. 32 crore transaction per day through its network.

Recalling her visit to a foreign country (she did not wish to name the country) recently, Sitharaman said, “The Prime Minister and the Minister of that country spent a lot of time talking to me about BHIM, GST, and other issues like demonetisation. They were surprised at what we have achieved and even if it is 60 per cent it is a miraculous achievement.”

Stressing on the importance of GST, she said that what was required now is greater transparency among the people and everyone must be extremely proud of GST. The chain of paying taxes should remain and if it is broken at any stage, then one is at a loss as the transaction will end abruptly. Hence, it is very important to keep the chain moving and populate the account.

“If there is transparency, none of the Commissioners will come and inspect. More importantly not one Inspector is going to come and visit and you do not even have to offer a cup of chai. However, let us be honest about it and accept that most were not trying to pay taxes,” she said amidst laughter.