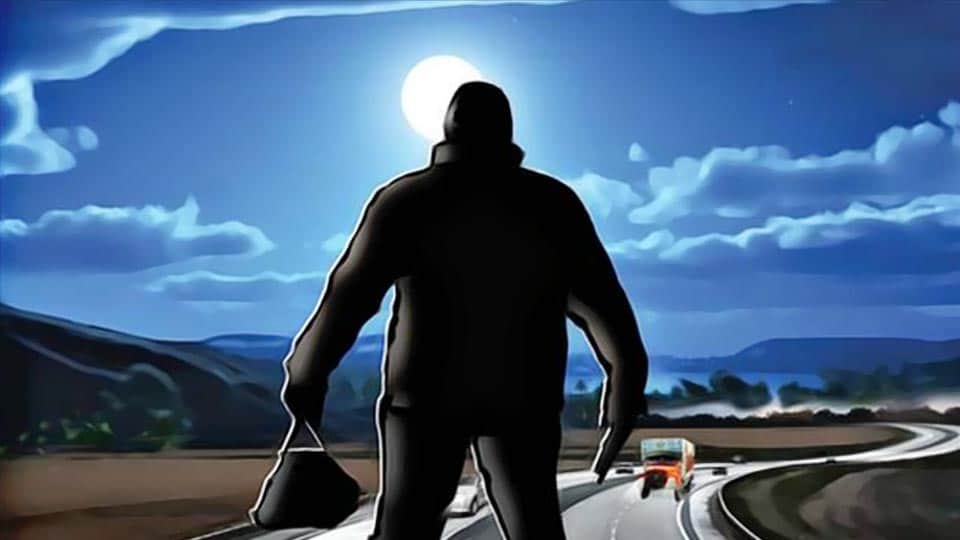 Mysuru: The criminal gangs that usually target late-night travellers on the Mysuru-Madikeri-Bantwal and Mysuru-Hunsur Highway are back in action after a brief lull. A gang of seven members, armed with lethal weapons and cricket bats, attacked a group of youth who were travelling in a car from Kerala to Bengaluru via Mysuru in the wee hours of yesterday.

According to the Police, a group of youth hailing from Panathur in Kerala were travelling to Mysuru in their Chevrolet Aveo car (KL-60-B-9752) . They have been identified as Jisman, Arif and Unnais. Jisman owned a hotel in Bengaluru and was travelling along with his friends Arif and Unnais.

As they crossed Hunsur and travelled around 10 kilometres, a Toyota Etios car that did not have a registration number plate started following their car. When Jisman, who was behind the wheels, reached close to Bilikere, the car that was following him hit his car from behind and this happened a couple of times.

Panicking, Jisman and his friends drove fast and the other car managed to overtake them and forced them to stop at Bilikere. Jisman and his friends immediately got down from the car, locked its doors and were trying to escape when over six  persons (one person was in the driving seat) got down from the other car with lethal weapons, iron rods and cricket bats.

While the gang was chasing Arif and Unnais, Jisman somehow managed to go back to his car and drove it to a hotel through a mud road on the highway where there were some people who had got down from night-service buses. Seeing Jisman standing near the group of people, the gang members panicked and fled. Jisman’s friends later joined him.

After escaping from the gang, the friends went to the Bilikere Police Station and narrated their ordeal. Acting on their complaint, a Police team from Hunsur Rural Station visited the spot and conducted mahazar.

The Police have obtained CCTV footages that have recorded the movement of vehicles from an hour before and an hour after the crime.

Following the incident, night patrolling on the highway has been intensified.