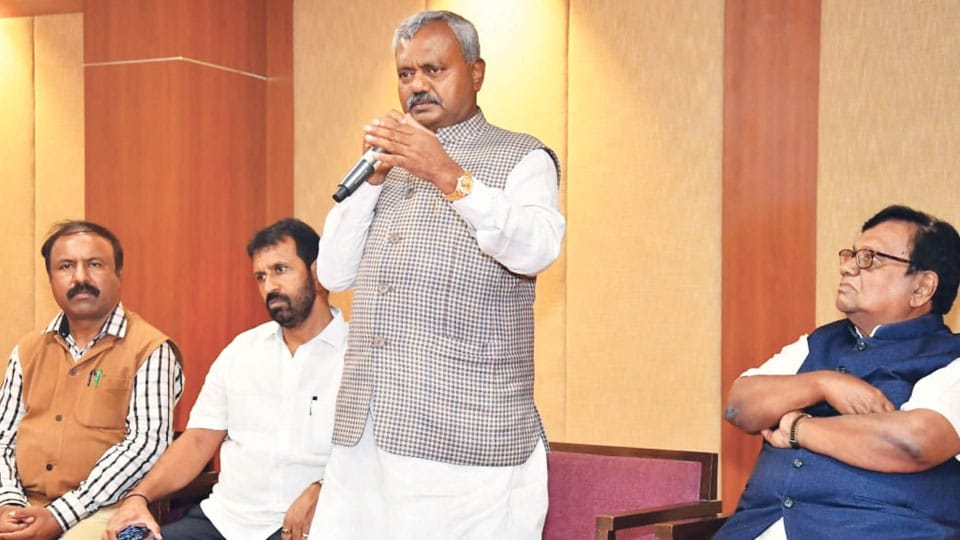 Mysore/Mysuru: District Minister S.T. Somashekar has said that the Government is mulling on naming the Film City that is proposed to come up in Nanjangud taluk of the district, after late Sandalwood Star Puneeth Rajkumar.

He was speaking at the preparatory meeting on ‘Nudi Namana’ programme to be organised by the District Administration  in memory of the late actor at Mysuru, at a private hotel here recently. Maintaining that the ‘Nudi Namana’ Programme is being held on a large-scale, he said that Sub-Committees will be formed for charting out the modalities of the programme. The programme will be organised based on the suggestions that these Committees would come up, he said adding that all measures will be taken for making the event a truly meaningful one.

Continuing, Somashekar said that the Open Air Theatre at Manasagangothri is among the venues to be considered for holding of the programme. Noting that the date of the event will be announced shortly, he said that Chief Minister Basavaraj Bommai would be invited to take part.

Senior theatre artiste Rajashekar Kadamba observed that Puneeth Rajkumar’s ‘Punyasmarane’ should not be limited for just a day and should go on for a week.

KEA Chairman Hemanth Kumar Gowda said that the KEA will extend full cooperation if it is decided to hold the event at Dasara Exhibition Grounds.

MLA L. Nagendra said that the venue of the event will soon be finalised in the presence of  the District Minister. The programme should be held in such a manner that it remains etched in the memory of the people, he added.

Former District Kannada Sahitya Parishat President Dr. Y.D. Rajanna said that most of  Puneeth’s Rajkumar’s contributions to the society is coming to light only after his death. Considering the late actor’s social service, the District Administration should pay a befitting tribute to him, he added.

The meeting discussed holding of blood donation and eye-donation camps, health camps, announcing an award after Puneeth Rajkumar, naming of a prominent Road or Circle in the city after Puneeth, making of a documentary featuring clips from each of the 46 films that the late actor has acted and naming of Kuppanna Park after the late actor, among other  plans and programmes.