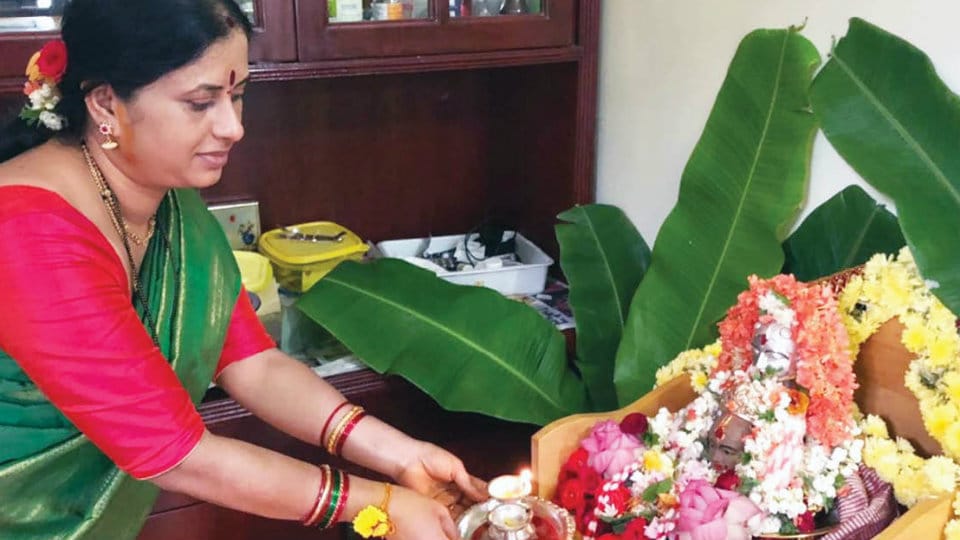 Mysuru: Women dressed in their best finery were seen thronging temples across the city to offer puja to Goddess Gowri this morning, apart from performing Gowri puja at their houses.

The idol of Swarna Gowri has been installed in most of the temples, including the 101 Ganapathi Temple in Agrahara, Amriteshwara Temple on Dewan’s Road, Karumariamma Temple on Sewage Farm Road in Vidyaranyapuram, Chamundeshwari Temple in K.G. Koppal, Adi Shakti Bandantamma Kalamma Temple in Kuvempunagar, Siddivinayaka Temple in Siddarthanagar, Kanti Mallanna Kalyana Mantapa on Kabir Road where the Veerashaiva Sangha has installed Gowri.

The Gowri fest is purely celebrated by women with the married women seeking longevity for their husbands and family and the unwed praying for early marriage and a husband like Lord Shiva. They pray by offering Bagina which contains five types of grains, five types of fruits besides Bale Bichchale which will have a comb, arishina-kumkuma, mirror and a blouse piece. The well-to-do even offer a saree with the Bichchale.

Even as the women offer Bagina and Rs.10, the priests in the temple tie kankana (a string of flowers) on them.

Rush in Market: Even as many are celebrating the Gowri festival, people were seen thronging the Devaraja Market for last minute purchase for the Ganesha festival tomorrow.

Many were seen buying both Gowri and Ganesha idols. People from villages had come even on bullock carts to purchase Ganesha idols of three to four feet. A few who had probably ordered for five feet Ganesha idol (though it is banned) were seen carrying it to install in their villages. 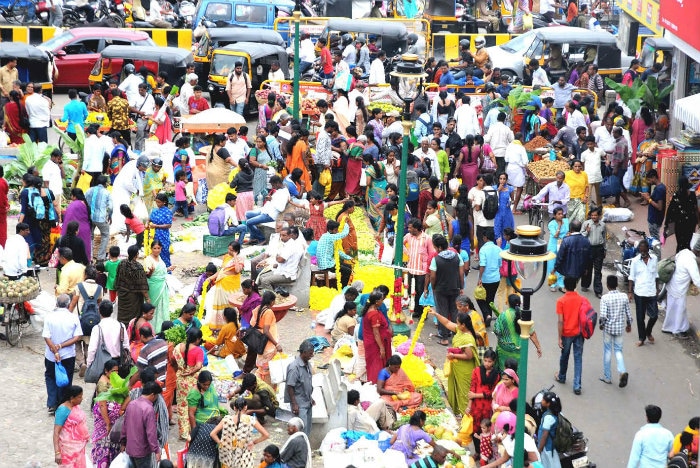 Since the days of making festival delicacies at home are long gone, readymade chakkuli, kodbale and modaka, all very favourite savouries to Lord Ganesh, were briskly being sold at the bakeries and condiment stores.

READ ALSO  Flower vendors not for shifting business to J.K. Grounds during festivals

On the main streets, the flower vendors and fruit sellers were seen attracting the customers. However, the sale in the morning had come down and the flower sellers who hoped to make a kill by selling that at more prices had to be satisfied by bringing the price down. A standard length of Chrysanthemum (Sevanthige) flowers which was being sold yesterday at Rs.80 was now being sold at Rs.60 and even less.

The eco-friendly Gowri-Ganesha idols are being installed in many places including K.T. Street, Vontikoppal, Kuvempunagar, Siddarthanagar and other areas. As the sale of Plaster of Paris (PoP) Ganeshas has been banned, the clay idols are being sold at a higher cost. For instance, a one foot to one-and-a-half foot clay Ganesh is being sold at Rs.200 to Rs.250, whereas the PoP Ganesha cost 30 to 40 percent less.