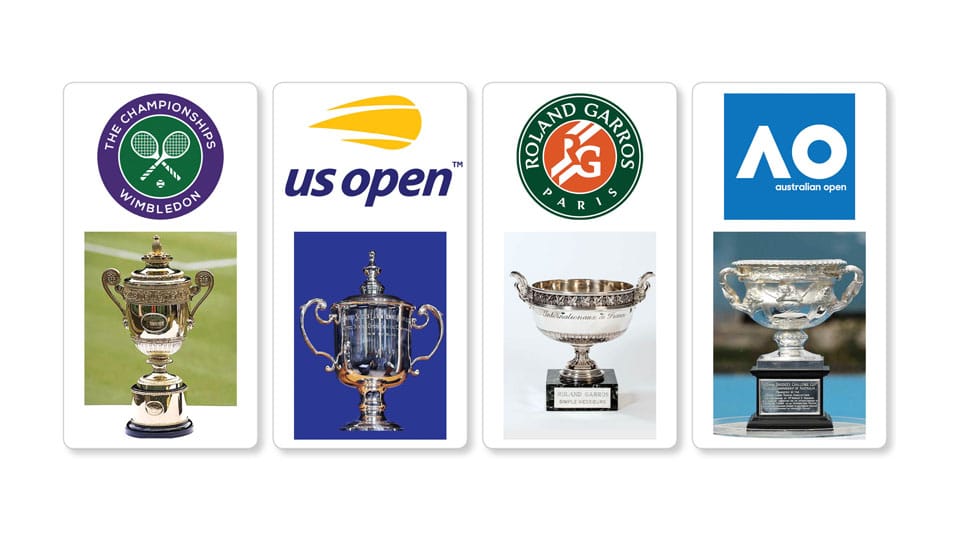 Grand Slam Events over the decades

With the conclusion of US Open Tennis Tournament last month where Geriatric Rafael Nadal (33 years) had the better of one of the Next-Gen players, Daniil Medvedev (23 years), the curtain closed on Grand Slam events for the decade. However, this write-up is not about the final match or the whole tournament but a review of the entire spectrum of Grand Slam events over the last one and a half centuries.

The Grand Slam events consists four Major tennis tournaments, namely Wimbledon (1877), US Open (1881), French Open (1891*) and the Australian Open (1905). (*Though the French National Tennis Tournament started in 1891, since it opened to non-French nationals only from 1925 onwards, it has been considered as a Grand Slam event from that year onwards.)

Another very important point is that while several other Western European countries had started their national tennis tournaments as early as 1920s, none were considered as Grand Slam event because for many decades, only these four countries had won the coveted Davis Cup.

These tournaments are held every year except during the two World Wars and are followed literally by thousands of spectators, millions of fans across the continents via the print media and live radio commentary initially, and of course from 1970s onwards by live TV coverage, and still later via the internet. From the first Wimbledon in 1877 up to 2019 US Open, there have been a total 473 Grand Slam events. Since many players have won multiple times, ultimately only 149 individual male players have won at least one Major title. While the first Major title was won by Spencer Gore in 1877, the last first-time winner is Marin Cilic of Croatia in September 2014.

Thus for the first nine decades, the average number of first-time winners was 12 but the same is only three for this decade. This is really lopsided and is only because of three players, namely Roger Federer, Rafael Nadal and Novak Djokovic. Together they amassed a total of 33 titles during this decade leaving only seven to be shared between Andy Murray, Stan Wawrinka and Marin Cilic, the first-time winners of this decade.

The matter of Geriatrics Vs Next-Gen players has been a hot topic for discussions for sometime by the news media, tennis analysts and the so called experts. When this question was posed to Federer and Djokovic, both of them replied sensibly, “There are some very promising youngsters like Thiem, Zverev, Tsitsipas and now in 2019 Medvedev, and they are bound to win a Major title sooner than later.” Nadal meanwhile was more forthright when he said, “It is just that the three of us at the moment are better than the rest of the players or vice versa.” The results of the past decade and half prove that he is right.

During the middle Sunday of US Open fortnight, there was a panel discussion between Boris Becker, Mats Wilander, John McEnroe and Ivan Lendl. Between them they owned 28 Major titles! Now all of them are either TV commentators or coaches and regular contributors to the sports sections of International papers. So they have an in-depth knowledge of the finer points of the game.

Among other issues, one of the topics for discussions was about the Geriatrics Vs the Next-Gen Players. While McEnroe seems to agree with Nadal’s views, Lendl counter argued that old 27 year player is now the new 33. In other words, he feels, we need to give more time for the 22 year old to mature and more importantly, they have a long tennis life span (a la Federer).

Becker on the other hand had a very important point to make. He said that structuring of a point in every rally is very important and Djokovic is the master of this art. A classic example of this view is the Wimbledon 2019 finals between Federer and him where the score stood at two sets all, 12 games all and 5-3 in the tie-break in favour of Djokovic. Djokovic served to the backhand of Federer and continued the rally to the backhand each time pushing Federer more to his left side. On the next shot, Djokovic hit a backhand shot deep towards Federer’s forehand corner which Federer could not reach thus reaching match point. Federer of course fumbled at this stage and made an unusual unforced error to hand over the coveted title to Djokovic. This specifically proved Becker point of view. Another point stressed by both Lendl and Backer was that a good coach is essential for a successful player. Unfortunately good coaches are not easy to find and they are expensive!

One tennis analyst has compared tennis players to track and field athletes. In running, there are sprinters, middle distance runners and long distance runners. The technique and training for each of these categories is different. A 100 meter sprinter cannot dream of competing in Marathon and win but for tennis, one needs all the three levels of skills. For example, there are a few players who can serve at 140 miles per hour but cannot sustain a long rally from the baseline. A defensive player who is a returning machine from the baseline might be overhauled by a good serve and volley player. Above all, a tennis champion has to have the stamina like a marathon runner to carry on for nearly five hours for one match and for seven matches in a row.

To conclude, the three geriatrics have proved that they posses these qualities and it is to be seen who among the new comers will not only break the glass ceiling but will sustain winning level like the present stalwarts plus champions like Ken Rosewall, Rod Laver, Bjorn Borg, Becker, Pete Sampras, etc.