Home » News » GST implementation did not cause inflation: GST Chief 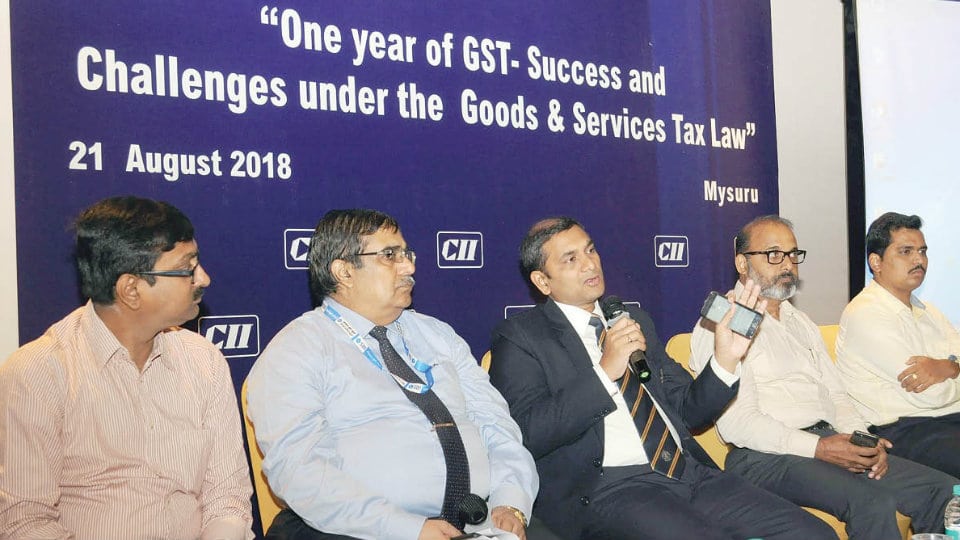 GST implementation did not cause inflation: GST Chief

Mysuru: “Inflation may be due to demonetisation but luckily we never had any inflation due to implementation of GST (Goods and Service Tax) across the country,” said Ravi Kiran Edara, Joint Commissioner, Mysuru GST, Commissionerate.

He was speaking after inaugurating a one-day seminar on “One year of GST – Success and Challenges under the GST Law,” organised by CII Mysuru in association with Lakshmikumaran and Sridharan Attorneys at a private hotel here recently.

He said, “The implementation of GST benefited the Govt. Every month at an average they are collecting nearly Rs.90,000 crore, which has increased further from April this year. There are some writ petitions in High Court on GST matter but they were far less than what was expected.”

“In just a year of GST implementation, there has been upward trend in the number of registered indirect tax assessees, also referred to as tax base. The number of indirect tax assessees who have registered for GST is nearly 1.1 crore, which includes 48 lakh new assessees which has brought cheer to the Tax Department. The compensation cess to State was Rs.7,000 crore. Those within Rs.20 lakh are also signing in for GST. Transition from old to new in terms of revenue to Government is good” said Ravi Kiran.

He also mentioned that if GST Council decides, GST on petrol and diesel including petroleum products can be implemented – but it’s not the same for real estate and liquor where decision need to be taken by way of amending Constitution.

“Many industrialists also welcomed GST and mentioned that GST benefited them a lot. The government is willing to hear the issues on GST – it may be through social media including through twitter,” said Ravi Kiran.

GST expert P.M. Prabhakaran briefed about proposed changes under GST which is already passed in Lok Sabha, various issues faced by industries since last one year and advised people on how to resolve issues  and take it forward.

Participants from various industries across the city and district took part in the day-long seminar, according to a press release from CII, Mysuru.