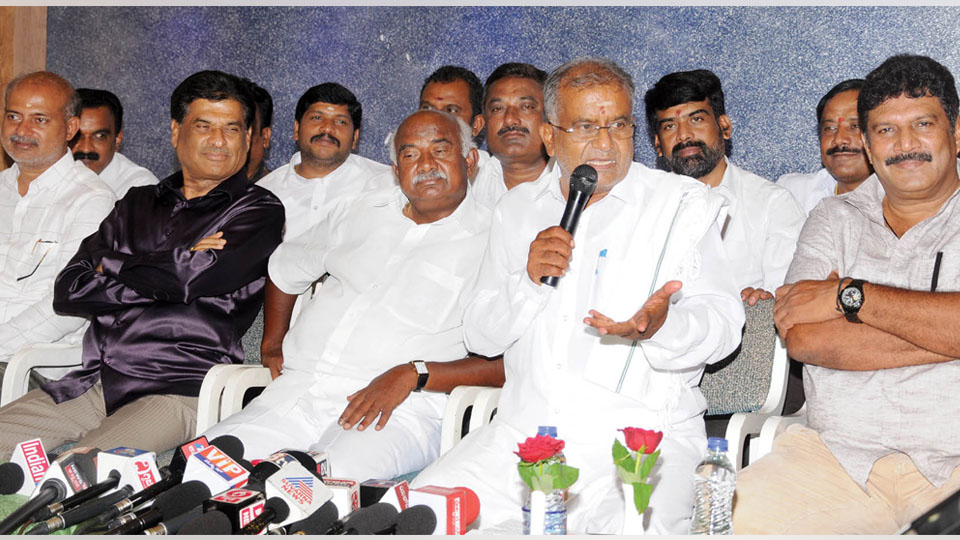 Mysuru:  Defending his party’s decision to form the government with Congress in the backdrop of a hung verdict in the Assembly polls, Chamundeshwari JD(S) MLA G.T. Devegowda (GTD)said that both the parties had come together to keep the BJP out of power.

Addressing a press meet at a private hotel here this morning, GTD said that although the JD(S) and Congress waged a bitter battle in the run up to the polls, the JD(S) was quick to join hands with the Congress post results, in order to keep ‘communal’ BJP out of power and thus maintain the JD(S) party’s secular credentials.

Referring to farm loan waiver issue, the MLA said that Chief Minister H.D. Kumaraswamy was working out modalities to ensure a hassle-free implementation and the announcement will be made within a few days.

Replying to a question on Cabinet formation, the JD(S) MLA said that the coalition partners Congress and JD(S) were working overtime on the matter and the Cabinet will be in place in a couple of days.

Lashing out at State BJP Chief B.S. Yeddyurappa for calling a State bandh on Monday in haste, Devegowda said the bandh served no purpose for the BJP, as the people were well aware that CM Kumaraswamy cannot announce loan waiver immediately after coming to power and working out the modalities will take sometime.

Pointing out that he has appealed HDK to give more representation to Mysuru region in the Cabinet, GTD thanked the voters, party workers, leaders and members of the public who supported the JD(S) in the Assembly polls.