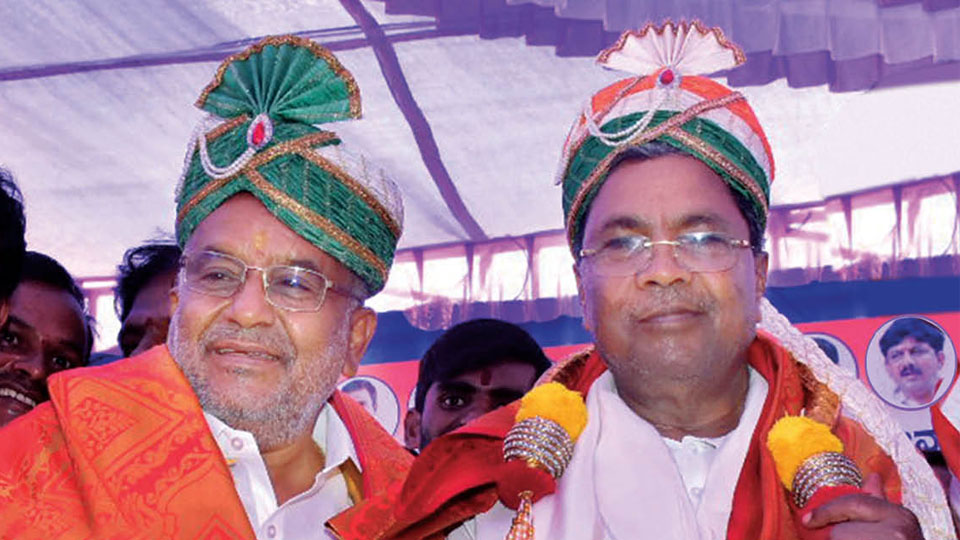 It is their first joint public meeting after the former CM was handed a crushing defeat by GTD in Chamundeshwari in the Assembly elections in May 2018. The leaders came face-to-face today and shook hands to bury the past and forget the bitterly fought Assembly elections in the larger interest of keeping the BJP from returning to power.

Today’s public meeting was to present a united face to its Opposition and appealed to its warring workers to set aside their differences and work with each other for the Lok Sabha elections just four days away.

The Congress and JD(S) are scrambling to pacify its disgruntled workers who have publicly come out to express their unwillingness to work with each other.

Addressing the gathering, GTD said that both he and Siddharamaiah entered politics together in 1983 and since then were together until they separated in 2005 when Siddharamaiah joined the Congress and he stayed in the JD(S).

GTD said that he was happy that they have come together again after gap of 14 years, with the Congress-JD(S) entering into a poll pact to keep the BJP out of power. Pointing out that Chief Minister H.D. Kumaraswamy has continued with the welfare schemes initiated by the previous Siddharamaiah Government, he said that Kumaraswamy has kept his promise of farm loan waiver.

He exhorted the workers of both the parties to campaign unitedly and thus ensure that coalition candidate C.H. Vijayashankar gets the highest number of votes from Chamundeshwari. Siddharamaiah, in his address, lashed out at the BJP and wondered what had happened to the bricks and money collected by the BJP for construction of Ram Temple in Ayodhya.

Recalling fond memories of his political journey with GTD, Siddharamaiah said that though GTD defeated him, he had no ill-will towards him and today was a special moment as they were addressing a public gathering for the first time after a gap of 14 years.

Maintaining that PM Modi had nothing to boast of during his 5-year rule as PM, Siddharamaiah listed his own achievements and the numerous welfare schemes launched when he was the Chief Minister for 5 years. Taking a dig at MP and BJP candidate Pratap Simha, the CLP leader alleged that Simha indulged only in communal politics.

Accusing the BJP of following Hitler’s culture, Siddharamaiah ridiculed BJP MLA Ramdas for calling him for a debate on Modi’s achievements and said that he had rejected the invite saying that he was ready for a debate only with Modi and no other BJP leaders.

Referring to Sumalatha Ambarish’s contest in Mandya, Siddharamaiah said he considers the fight in Mandya as between the BJP and secular forces. He appealed the workers of both the parties to work for the victory of coalition candidates — Vijayashankar in Mysuru-Kodagu, Nikhil Kumaraswamy in Mandya, Prajwal Revanna in Hassan and R. Dhruvanarayan in Chamarajanagar.

Former Minister C.M. Ibrahim, C.H. Vijayashankar, former ZP President K. Marigowda, leaders Narasimhaswamy, Siddegowda, Narasegowda, Basavanna, Manjula Manasa and others were present. Many workers were seen wearing the shawls of both the Congress-JD(S), as a mark of unity between the two parties.

5 COMMENTS ON THIS POST To “GTD, Siddu join hands in Chamundeshwari”