Home » Feature Articles » Had two choices in Life… To quit or To live! 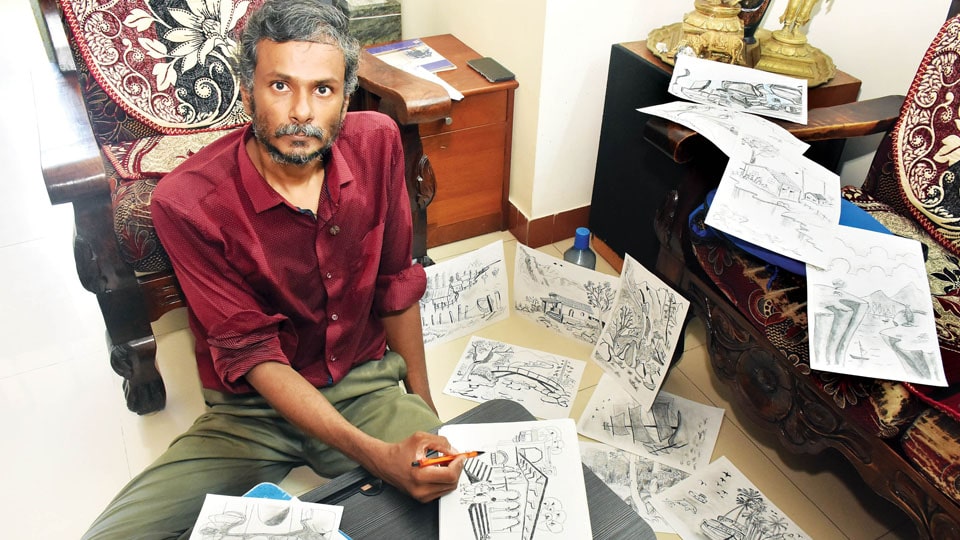 Had two choices in Life… To quit or To live!

Kartik Janakiram, a 43-year-old Parkinson’s patient, an inspiration to all

Had two choices in life… to quit or to live? I chose to live with my disease.” These were the painful words uttered by an art-lover and a Parkinson’s patient, who has been fighting with the disease for 22 long years. Meet Kartik Janakiram, a 43-year-old civil engineer by profession, who designed the BM Habitat Mall in Jayalakshmipuram, Mysuru. Also Kartik was part of constructing Vidya Vikas College of Engineering on Bannur Road.

Born and brought up in Bengaluru, Kartik completed his engineering in RV College. Life was not kind towards Kartik, as he was diagnosed with Parkinson’s at a young age of 21. During his student days, Kartik realised that his body was affected by Parkinson’s.

In 2006, Kartik moved to Mysuru as he got the project of constructing a shopping mall (BM Habitat Mall). He got married in 2012 to Aarti Singh, who hails from Pune. The couple resides in VV Mohalla. Kartik had a very good career for which he won 7 international awards and youngest engineer in Karnataka award. Later Kartik started his own factory called KT Precast (Precast walls) which was doing well in the construction field. Everything was going according to his wish, but Kartik’s health condition worsened after 2017.

As the health condition was going bad day by day, Kartik lost control over his body. Tremors, stiffness and slowing of movement were the result of Parkinson’s on Kartik. His body reached such a condition that he was unable to work. In December 2019, Kartik underwent Deep Brain Stimulation (DBS) operation after which he became bed-ridden without any body movement. All he could see was his dreams shattering in front of his eyes.

Quit or live with it

Sharing his harrowing experiences with Star of Mysore, Kartik Janakiram said, “Fighting a disease like Parkinson’s is not easy. Those who are affected by this disease know that they cannot beat it. No doctors in the world can exactly tell you what type of disease is this; doctors only advise you on how to deal with it. I had two choices in life — to quit or to live? I chose to live with it, as I never wanted to quit. I still have passion, courage and strong will to achieve big in life.”

Accept life the way it comes

“One thing I learnt from this disease is to accept life the way it comes. I started thinking what will I do tomorrow? I’m an art-lover and started making paper crafts (origami) and embossing arts to keep my mind calm. I learnt making paper crafts by watching videos on YouTube. I did my first paper craft in January 2020. I took four days to complete it. Slowly I gained confidence of making more crafts along with drawing embossing sketches. Now art has become part of my life,” he sighs.

Wife is my biggest strength

“Whenever I tried walking, I had fear of falling down. My wife gave me support when I was about to fall. I can understand how it feels for a wife to take care of a husband like me. She never complained for once, in fact I am alive today because of her. She is my biggest strength in life. Even her mother is a great human being, who supported me in every step of my life. I’m blessed to have a loving family like this,” Kartik says, looking up to his wife standing close by.

Want to re-open our factory

READ ALSO  Pranayama is all about controlling emotions

“We had our own factory of Precast, which is shut temporarily due to my health condition. We are looking for a business partner, who could help us in re-opening the factory through joint venture. My wife (MBA graduate) is good at designing and precasting walls; I wish to continue working in construction field. Hope this will happen soon and we get an opportunity to start a new life,” said Kartik with voice choked.

Speaking to SOM, Aarti Singh said, “My husband is intelligent and a knowledgeable person. He deserves another opportunity in life to show his talent and capability. Never felt difficulty in taking care of him. Now he can ride a bicycle and drive a car, but I want to see him walk and that day will be the happiest day of my life.”