Home » News » To hang till death: Man gets death penalty for killing 5 labourers in Ch’Nagar 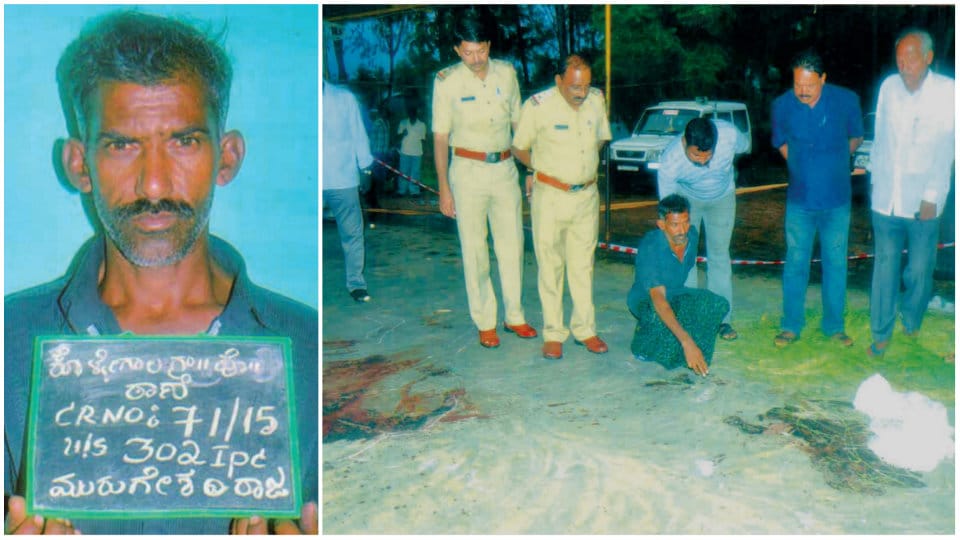 To hang till death: Man gets death penalty for killing 5 labourers in Ch’Nagar

Chamarajanagar: The Chamarajanagar Principal District and Sessions Court has awarded death penalty to a person who was accused of murdering five labourers including a child in May 2015. The Court found him guilty yesterday and honoured the charge-sheet filed by the Police.

The accused has been identified as 47-year-old Murugesan alias Muruga of Periyar village in Mettur taluk, Salem District in Tamil Nadu. He had murdered five persons including two women and a girl, all from Tamil Nadu near Harale village in Chamarajanagar district, some 100 kms away from TN border on May 12, 2015.

All of them were agricultural labourers from TN and were camping in make-shift tents near sugarcane farm where they worked. Police had confirmed about 16 labourers from Tamil Nadu had come to Karnataka in search of work and were staying at the farm near Harale village.

The victims were identified as Rajendran (37), a mason from Andiyuru of Erode district, Rajamma (36), Rajamma’s 8-year-old daughter Roja, Kashi alias Shivakumar (38) of Makampalya, and Shivamma (37) of Kadalur. They had been attacked with a sickle that is used to cut sugarcane and some other heavy objects. The victims were attacked on their heads. They were found dead when landlord Shivanna arrived at the spot on that day.

Murugesan carried out the murder in the heat of rejection. He had deserted his wife and had an illicit affair with another woman. She too had left him and he later tried to befriend Rajamma who was a part of the group that came from Tamil Nadu. Rajamma was a widow and she was living with Rajendran. Even Shivamma and Kashi were living together though they were not married.

Murugesan expressed his desire to have an affair with Rajamma who spurned his sexual advances. Later, an argument ensued between the women and Murugesan, with contractor Rajendran and labourer Kashi abusing him. Irked by this, Murugesan began conspiring to take revenge against them.

On May 12, at around 1.30 am, Murugesan was heavily drunk when he crept up on the camp when the labourers were fast asleep. He picked a heavy sickle, used to harvest sugarcane crop, as his weapon and hit the heads of the two women and men, killing them. After this, he mutilated the women’s private parts.

Murugesan was so drunk that he went on hitting their heads with the sickle even after they were dead, and didn’t spare the 8-year-old Roja either. The other labourers, who were in the habit of drinking, were deep in sleep when the killing happened. They awoke in the morning and  fled the crime spot.

Following the incident, a special team was formed under Chamarajanagar Rural Police Inspector H.M. Mahadevappa and Murugesan was arrested on May 13, the very next day of the crime. The then Kollegal Circle Inspector Amar Narayan had investigated the case and the then Dy.SP Suresh Babu had submitted a charge-sheet in the Court.

Hearing the case, Principal District and Sessions Judge Lakshman F. Malavalli found Murugesan guilty and sentenced him to death. Public Prosecutor T.H. Lolakshi argued on behalf of the State. This is the second case where the Principal District and Sessions Judge has sentenced the accused to death. The first one was where two persons were sentenced to death for raping and murdering a little girl at Bhadrayyanahalli near Kollegal.

A daunting task for the Police

Tracing Murugesan and finding out his previous case history was a daunting task for the investigation team led by Inspector H.M. Mahadevappa and his team.

Murugesan was involved in three murder cases — one person in Karnataka and two persons in Tamil Nadu. He had been on the run for three years and his arrest led the Cops to solve three murders. Murugesan was a close friend of contractor Rajendran, and often visited the camp. On one of these visits, he discovered the illicit relationships and he too expressed a desire to have an affair.

Police said that Murugesan had a SIM card but didn’t have a mobile handset. He used Rajendran’s phone. After the mass murders, he took Rajendran’s phone and left the crime scene. Apparently, the same mobile phone helped the Police to trace Murugesan.