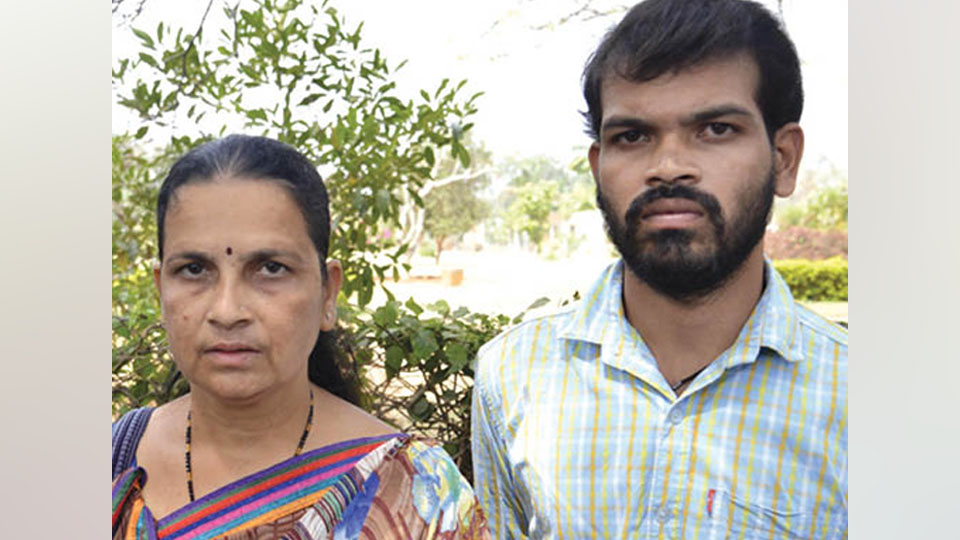 Mysuru: In a rare gesture, a 45-year old widow from Hunsur has appealed Governor and Chief Minister through Deputy Commissioner seeking permission for euthanasia (mercy killing) as she is unable to bear the harassment and intimidation of her neighbour’s family over property dispute.

The woman, Shylaja, accompanied by her son Ravi, walked in to the DC’s office here yesterday and submitted a memorandum to Additional DC T. Yogesh.

Explaining her ordeal to Yogesh, Shylaja said that she lived in a house at Thattekere village in Hunsur taluk which had been given to her by her father-in-law. She further said that her brother-in-law Nagaraj had sold his house abutting her house to a nurse working at a private hospital in Mysuru.

Continuing, Shylaja said that the nurse demolished the house with an idea to rebuild a new one and in the process had damaged the walls of Shylaja’s house. She further said that her complaint in that context filed with Hunsur Police yielded no result but invited an assault by the neighbour.

She added that she was receiving death threats from the neighbour. She disclosed that fearing an attack, she has been living with her son at Housing Board Colony in Hootagalli in Mysuru. She hence appealed Governor and Chief Minister to grant permission for euthanasia setting a deadline of 15 days.

Shylaja has also stated in her appeal that she would commit suicide in front of the DC’s office if nothing transpires. She is said to have sent copies of her appeal by post to Chief Minister Siddharamaiah, Home Minister Ramalinga Reddy, District Minister Dr. H.C. Mahadevappa, Human Rights Commission, DIG and Mysuru SP.

Yogesh confirmed that Shylaja had submitted the memorandum. He said that he has informed the matter to Additional SP N. Rudramuni and Hunsur Police Inspector and sought suitable security for Shylaja. He added that Rudramuni had assured to discuss with Shylaja. The ADC further said that Shylaja had been duly counselled and ruled out any permission for euthanasia.