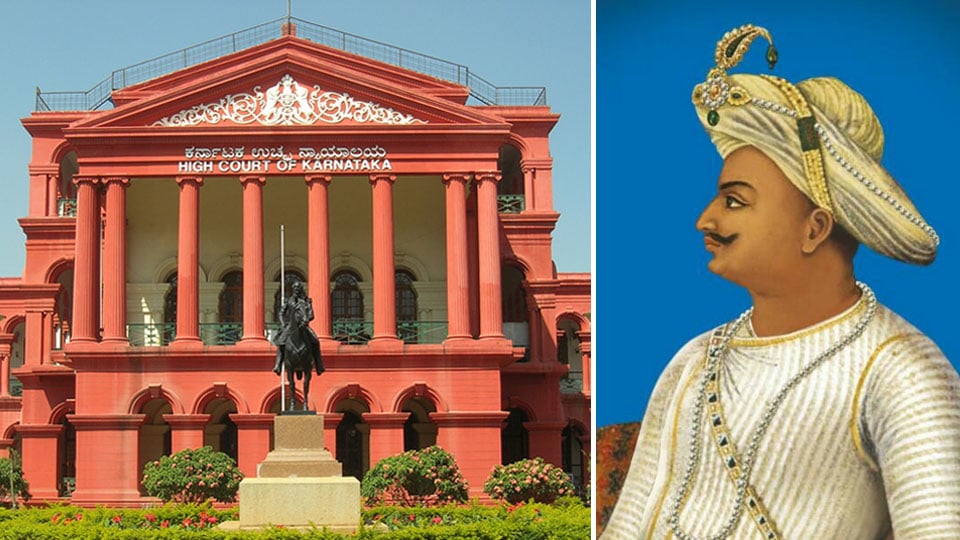 The PIL was filed by Kokkalemada P. Manju Chinnappa from South Kodagu challenging the celebration of Tipu Jayanti by the State Government. The PIL was heard by the Division Bench comprising Acting Chief Justice H.G. Ramesh and Justice P.S. Dinesh Kumar.

The HC said today that it would have intervened if the Tipu Jayanti celebration was against law. “Since it is not against law and constitutional provisions, we cannot interfere in the celebrations,” the Bench said.

According to the petitioner, Tipu was an invader and a dictator and glorifying such a person is a matter of shame. He added that it is an irony that the government wants to celebrate the birth anniversary of a person of this stature as he believed in the ethnical cleansing of the Kodava community.

It may be recalled here that on Nov. 3, the High Court had adjourned the PIL hearing to Nov. 7.  Petitioner Manjunath had prayed the court to quash the government’s circular dated Oct. 24 issued to celebrate Tipu Jayanti across the State, especially in Kodagu.

The petitioner alleged that Tipu had killed hundreds of Kodavas, and carried out conversions too. He prayed the court to give directions to the State Government not to celebrate Tipu Jayanti in Kodagu, the celebration of which might lead to law and order problem.

He claimed that during 2015 Tipu Jayanti, there were violent protests in Kodagu district and other parts of the State, resulting in a law and order situation.

It may be recalled here that in 2016 too, Manju Chinnappa had filed a petition against the celebration of Tipu Jayanti. Disposing of the petition, the then High Court Chief Justice Subhro Kamal Mukherjee had said that the celebration had to be contrary to law for them (the court) to intervene. This year too, the court cited the same reason and disposed of the petition.