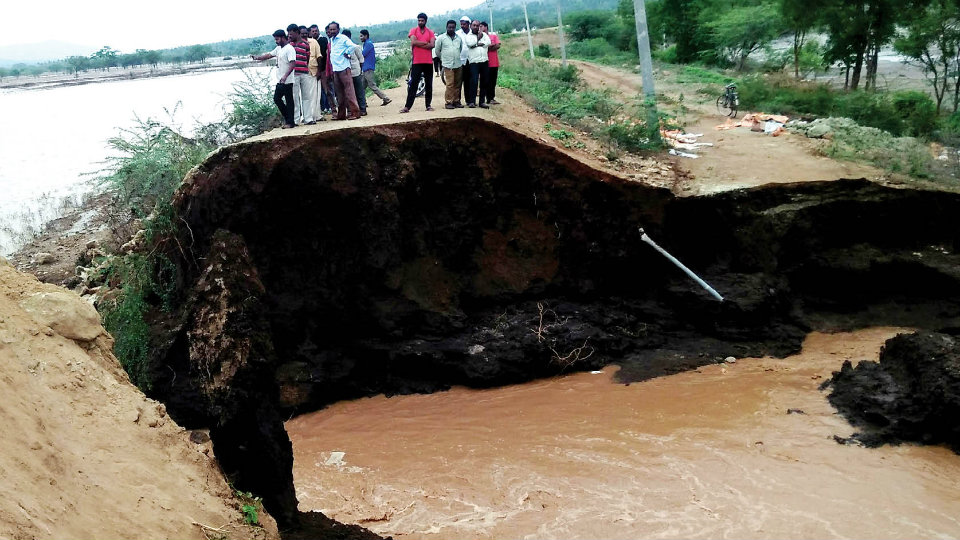 Gundlupet: The Vijayapura Doddakere tank bund in the taluk breached following heavy rains and the water gushed out, resulting in crops being destroyed.

The Vijayapura tank was filled to the brim with heavy rain. Suddenly, the tank bund cracked open and water poured out into the low-lying areas. As a result, hundreds of acres of standing crops and mud was washed out.

The people of the area, learning that the tank was full, visited the place early in the morning on May 26. They found that there was leakage and water seeping. Gradually, the leaking increased through the porous parts. They immediately brought it to the notice of the Taluk and Minor Irrigation Department officials. 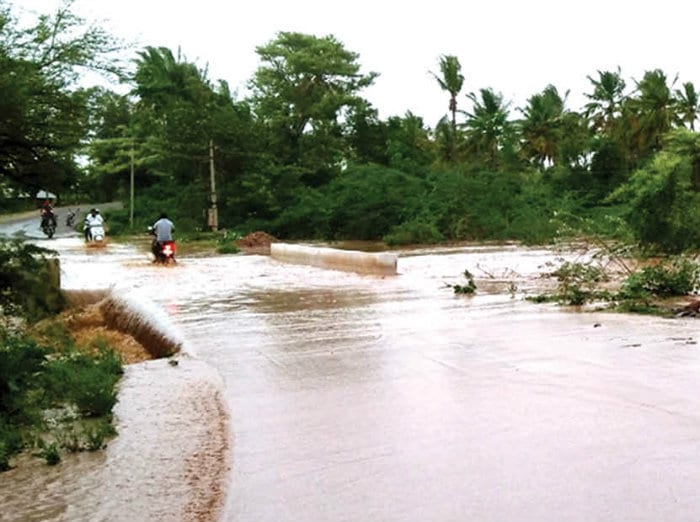 However, the Department officials have neglected the matter. Upset with the callous attitude of the officials, the public staged a rasta roko near Annurukeri. By evening, the officials have got the stones and mud to fill up the tank bund. But the efforts failed and by night the gaps in the tank increased and finally it breached.

‘The government has to make all efforts to fill the tanks and strengthen all the tank bunds. The contractors must be held responsible for the tank breaches. The government should compensate for the loss of crop and mud to the farmers.’— Kadabur Manjunath, Raitha Sangha leader

‘Though we tried to stop the breach by packing the tank with sand bags and stones, we were not successful. Once the water empties, we will take steps to strengthen the bund and store rainwater.’  — Basavaraju, Asst. Executive Engineer, Minor Irrigation Department

The water started flowing on the road and filled potholes and reached the Gundlu river and finally joined the Amani tank reservoir that was filled to the half. The water entered the nearby farms and houses and disturbed the animals. People ran helter skelter. Traffic was also disrupted on the Annurukeri road. Jowar, sunflower and other crops that were planted recently was destroyed resulting in loss of lakhs of rupees.

A farmer Akram Khan, who had stored turmeric and coconuts in his farm, had to suffer a loss of Rs. 5 lakh. The heavy rains swept away the mud and everywhere the roads looked washed-out. 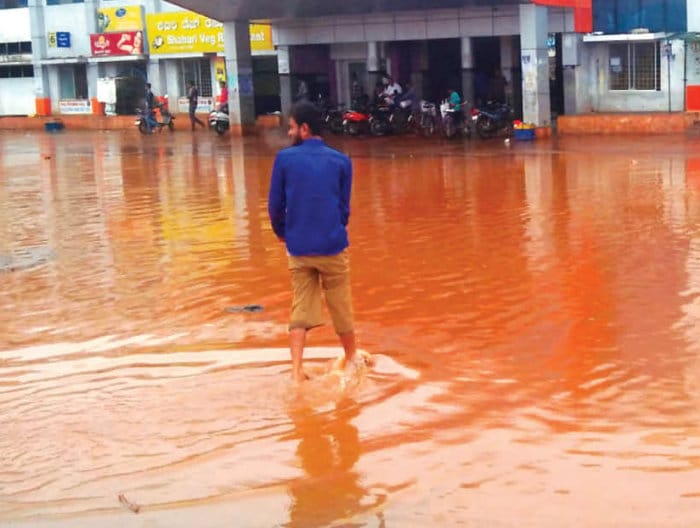 The people gathered in large numbers early in the morning to see the spectacle of the gushing waters from the tank bund. The Police had to deploy additional forces to control the crowd.

The Minor Irrigation Department officials arrived at the spot around 10.30 am and once again had to face the ire of the people. Later, they got the tipper lorries filled with stones and sand and started the repair work.