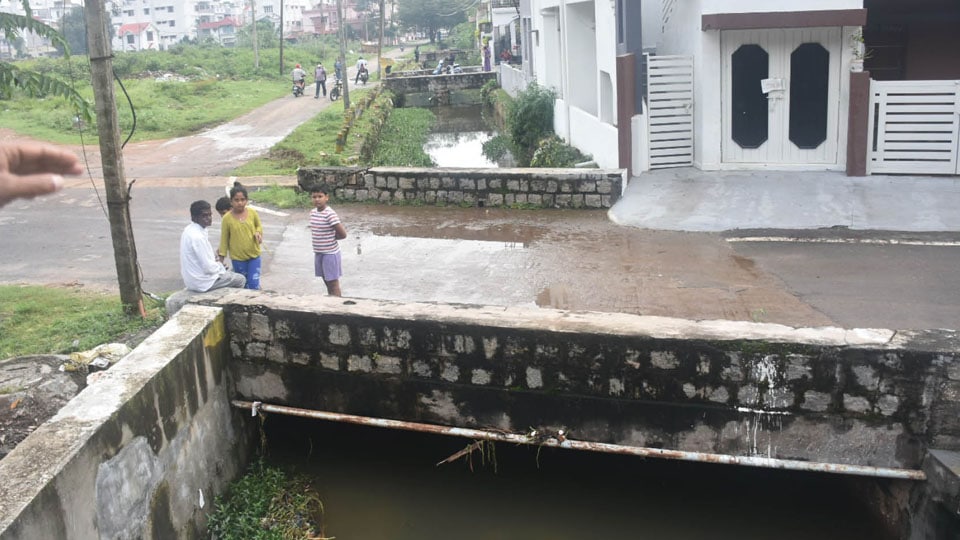 Heavy rain leaves a trail of misery in city

Mysore/Mysuru: A 60-year-old man was swept away in a huge storm water drain at Siddarthanagar which was flowing in full force following heavy rains that lashed across the city yesterday night.

MCC Abhaya team staff and Fire and Emergency Services personnel launched a search operation for the missing person yesterday night and continued it today morning too and fished out the body from Karanji  Lake at 2 pm.

The deceased has been identified as 60-year-old M.J. Chandregowda, a resident of Vinaya Marga in Siddarthanagar.

Heavy rains that began lashing at about 6.30 pm yesterday poured continuously and showed some respite at about 11 pm. Rain water entered the house of Chandregowda and his family members were removing water from the house.

While the family members were busy removing rain water, Chandregowda is said to have come out of the house and was standing on a small bridge covering the storm water drain in front of his house. Chandregowda slipped and fell into the overflowing drain. His body reached Karanji Lake due to sheer force.

Meanwhile, the public and residents of the area have expressed anger at MCC authorities and Corporators for showing negligence. They said that instead of taking up drain de-clogging works before rains, the authorities take up such works only when disaster strikes and added that the authorities should be well prepared before going for a war and not clean the guns at the time of war.

Pointing out that this problem exists every year, they said that though the authorities know this, they show their negligence each year and alleged that they were playing with the lives of innocent people.

The adjacent Thippayyana Kere is also full due to heavy rain. Rain water from the drains that overflowed last night have submerged most of the roads forcing pedestrians to wade in waist-deep water risking their lives. Similar scenes were witnessed in most low lying areas, which have been flooded.

Residents are also to be blamed

Meanwhile, Abhaya team members said that residents are also to be blamed for clogging of drains as they discard old beds, pillows and clothes and even dump wastes such as plastics inside the drains which get stuck onto weeds, clogging the drains and making them overflow.

While trees were uprooted at Vijayanagar, Saraswathipuram and other places, tree branches had fallen on roads at many places and the MCC staff were busy clearing them this morning.

Chamundeshwari MLA G.T. Devegowda, who visited Anandanagar this morning, conducted an inspection of the area where houses were flooded and has instructed the officials to clear encroachments on Raja Kaluve to enable smooth flow of rain water.

Meanwhile, a portion of the wall of Pancha Gavi Mutt at the foot of Chamundi Hill on Mysuru-Nanjangud Road has collapsed following last night’s heavy rain. With an inflow of 16,385 cusecs to Krishna Raja Sagar Dam recorded at 6 am today, the level at the reservoir stood at 122.40 ft. against the maximum of 124.80 ft. The outflow from KRS Reservoir to river and canals was 3,888 cusecs this morning.

According to the Statistics Department at the Office of the Deputy Commissioner, Mysuru taluk has received 79.80 mm rains last night.