Mysuru / Madikeri:  Floodgates of reservoirs along the Cauvery Basin have wreaked havoc in the low-lying areas in Kodagu, Nanjangud and Mandya. Heavy discharge of water from Harangi Dam in Kodagu, Krishna Raja Sagar (KRS) in Mandya and Kabini Dam in H.D. Kote have caused extensive flooding and residents along the water route are bearing the brunt of floods and even water entering homes.

Army has been called in for rescue operations in Kodagu. Several areas in Kushalnagar and surrounding areas face flood threat. Many roads, including the main roads in Kodagu, have also been damaged and residents are being rescued in boats and coracles.

The direct effect of water release from Harangi is on the KRS where over 1,23,449 cusecs of water is being released every day. Due to the heavy release, water has reached the inner areas of historical Nimishamba Temple near Srirangapatna. Petty shops inside the temple and its outer areas have been cleared with several shops marooned. The entire temple premises has been barricaded and tourists are banned from entering the waters.

Asia’s first Aqueduct Bridge near Srirangapatna built on the Mysuru-Bengaluru Highway has witnessed damage and deep cracks are seen at the very beginning of the Aqueduct Bridge. Meanwhile, heavy rains in Wayanad district of  Kerala has increased the inflow to Kabini Dam in H.D. Kote. The present inflow to the dam is 69,438 cusecs and there is an outflow of 70,000 cusecs. Following the increased outflow, the Suttur Bridge has been completely submerged and the bathing ghats of Srikanteshwara Temple in Nanjangud have been marooned. Devotees have been asked not to venture into water. The ever-busy Mysuru-Nanjangud Highway (NH-766) is likely to be closed if more water is released from Kabini. The District Administration has warned of more rains till Aug. 20. Isolated heavy to very heavy rain is likely to occur in Kodagu and Mysuru. Preparing for the rain, the Administration and the Fire Department have sent rescue teams to various places. A 17-member team with inflatable boats, life jackets and ropes are in H.D. Kote fire station, 11-member team have been stationed in T. Narasipur, a 14-member State Disaster Relief Force with their vehicles and equipment have been placed in Nanjangud. Three teams have been sent to Madikeri and Gonikoppal in Kodagu. However, there is no official communication from the  administration regarding the requirement of volunteers for flood relief. 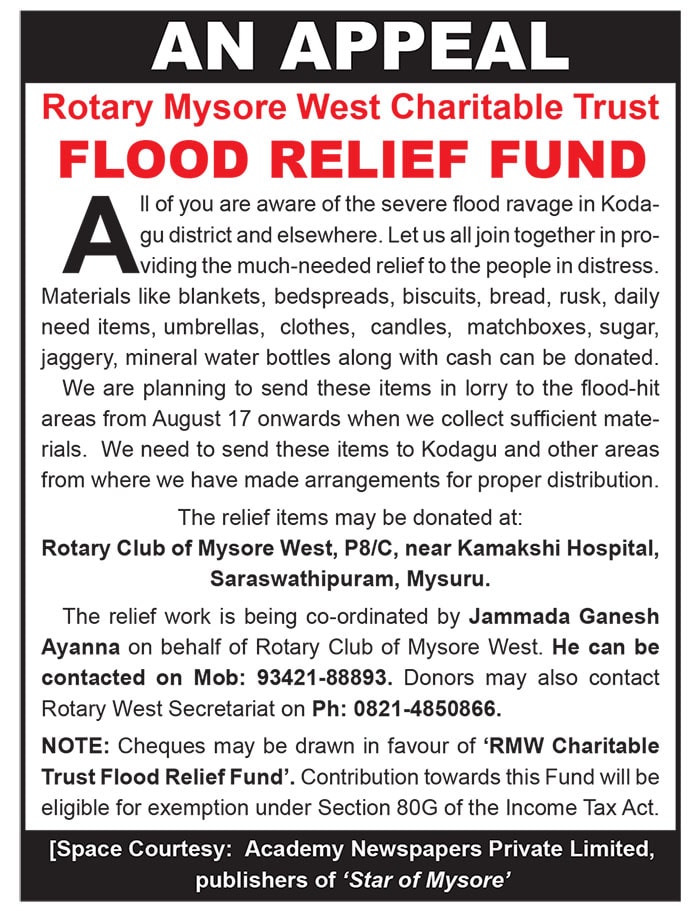