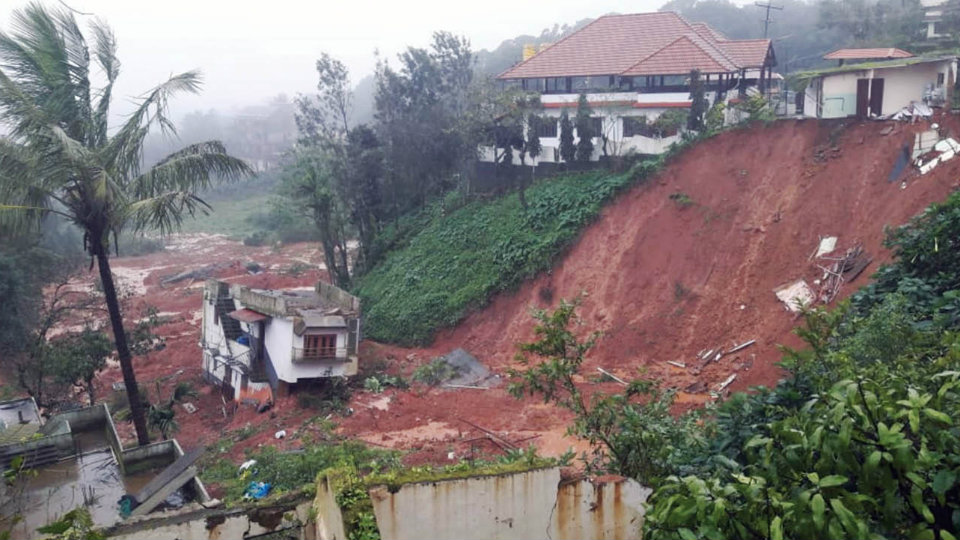 3 killed in landslide near Madikeri

Madikeri: Three people have been killed in landslides near Madikeri this morning and several people are feared trapped in landslides near Makkandur. Army has been called in and three helicopters have already left Bengaluru to reach Kodagu. However, the choppers are unable to land in Madikeri due to adverse weather conditions and the pilots were waiting (at the time we went to the Press) for the District Administration to clear landing at a suitable place and carry out rescue operations.

Mounds of mud crashed on a house in Katakeri near Madikeri this morning, instantly killing three persons. The victims are Venkataramana, Yashwanth and Pavan. One more person Yathish has been seriously injured and he has been rushed to Madikeri Government Hospital.

Of the dead, Yashwanth worked for the Anti-Naxal Force of Karnataka. The landslide occurred due to heavy rain that has been pounding Kodagu since the last couple of days. Loose soil and boulders crashed on the house, said other residents.

Over 60 people are trapped at Yemmethaalu and Meghathalu villages in Makkandur village and it is feared that many people are buried under landslides. This morning Chandu Gopal, Umesh, Chandravathi and Honnamma were rescued from their house near the place of landslides. Over 20 houses in Makkandur have been washed away and rescue teams are facing severe hardships to rescue the trapped people. Likewise, the Ponnampet-Thithimathi Road and the Madikeri-Somwarpet Road has been blocked. The link from Somwarpet, Shanthalli and Sakleshpur has been blocked with mounds of mud and rocks lying on the road. The road between Madikeri and Bhagamandala has also been blocked due to landslides.

Landslides have also been witnessed near Siddapur and Pollibetta. There are reports of over 300 people climbing on a hillock at Badigere near Madikeri and the Army has been called in to shift them to safer places using helicopters.

The Thantipaala and Hattihole rivers are flowing in full spate and landslides have occurred along the course of the river. Over 80 people are feared trapped here and the District Administration has already rescued 20 persons this morning. Over 7 kilometres of hill ranges have collapsed on the edges and the debris are carried away by flowing waters.